The protozoa are contained within the kingdom Protista along with the unicellular algae. The classes of protozoa are categorized by a variety of factors: cell architecture, motility structure, even hosts. They do not photosynthesize, rather being chemoheterotrophic like animals. This means that they use chemicals for energy production and they get their carbon from the same compounds, e.g. sugar. However, there are some pigmented protozoa and there are even a few that seem to be crossover organisms, being claimed by the botanists because of their photosynthetic ability. for example, the flagellate Euglena will photosynthesize in light (it contains chlorophyll) or will switch over to regular aerobic respiration (chemoheterotrophism) without light.

Many of the protozoa form a resistant, dormant structure called a cyst. Parasitic protozoa are identified by the active feeding stage, called a trophozoite, in addition to the cyst stage, both of which may be found in the feces.

For our purposes, there are only 4 groups of protozoa that will be covered here: these groups are separated by motility and cell structure.

Many protozoa are found in the gut of warm-blood animals and cold-blooded animals, as well as in insects such as termites and cockroaches. In addition, there are quite a few protozoans that live in blood. You will see some of these examples in lab.

Ameobas move by cytoplasmic streaming, having no motility structure. You will likely see some freshwater amebas in the pond water, some of which may have tests or 'shells' that surround their cytoplasm. The flagellates have flagella or an undulating membrane for motility. The ciliates have cilia. The Apicomplexa have a unique arrangement of microtubules, called the apical complex (used in the takeover of the host cell), in the cell. This last class has most of the human and animal pathogens in it. 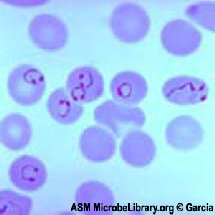