Bacteriophages are viruses which infect bacteria. PHAGE (as in phagocytosis) means "to eat", and generally refers to a virus. Most bacteria have phages that are able to parasitize them. In fact, the ability to be infected with a known phage type is used to identify some strains of bacteria (like Staph), known as phage typing. As the virus infects bacterial cells that it has been mixed with, the lytic infection destroys the bacteria. The bacteria have been poured into what is called a bacterial lawn on the agar plate. As the surrounding cells are infected and killed by the released viruses, a clear spot on the agar---in the bacterial lawn--develops, called a plaque.The plaques can be counted and the number of virus particles or virions in the original specimen, can be quantitated as viruses/ ml of plaque-forming units/ml (PFUs).

In this lab, 2 kinds of bacteriophages will be used---T4 and phi 174 viruses. Their host bacteria are 2 different strains of E. coli,so these bacteriophages are called coliphages. The purpose of using 2 different viruses is to show the specificity of a virus for its host, even for these little bacterial viruses. The liquefied tryptone soft agar, into which the bacteria and viruses are placed, has less agar concentration than normal liquefied agar. It allows better diffusion of the viruses and better contact with the bacteria. 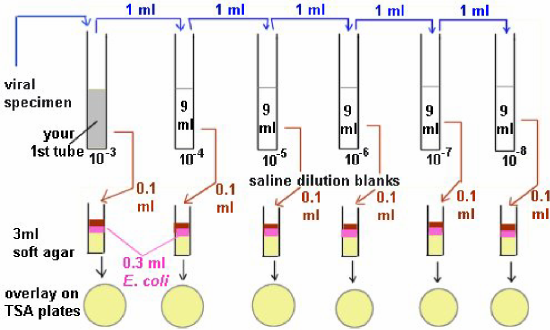