Instead of synthesizing a desired gene, can we used the amino acid information to directly isolate the corresponding genetic information?

If we are considering genomic DNA from eukaryotes, then there are a couple of things to consider:

If we are considering mRNA from eukaryotes, we may realize the following advantages:

A "library" is a convenient storage mechanism of genetic information.

"Reverse transcription" is a mechanism whereby genetic information contained in mRNA is converted back into a double stranded DNA form.

The enzyme responsible for this is an RNA dependent DNA polymerase called reverse transcriptase.

MMLV will use mRNA as a template, but requires a primer (it can extend a DNA primer but cannot synthesize one).

Therefore we can use poly dT as a single primer for a variety of different eukaryotic mRNA's.

Figure 3.6.1: First strand synthesis
Note that we have produced complementary DNA (or cDNA) to the original mRNA strand.

If we can introduce "nicks" into the RNA half of this DNA/RNA duplex then the situation would be very similar to that observed in "lagging strand" synthesis of prokaryotic genomic DNA.

Note that we will potentially have either a residual 5' RNA cap region, or a gap at the 5' end of the original mRNA strand.

Insertion of cDNA into plasmid.

To complete our construction of a useful cDNA library we need a way to maintain and propagate our cDNA.

Terminal transferase is an unusual DNA polymerase found only in a type of eukaryotic cell called a prelymphocyte.

How can we insert this into a plasmid? Figure 3.6.5: Ligating cDNA into the plasmid

Thus, the Pst I recognition cleavage site is regenerated and the C-tailed cDNA insert can be excised again from the library vector by cleaving with Pst I.

An alternate method to insert cDNA fragments into a library vector is through the addition of "linkers".

The steps in linker addition are as follows:

This textbook was published in 1998. The Human Genome Project was completed in 2003.

Size of some genomes and chromosomes:

For example, how large a library (i.e. how many clones) would you need in order to have a 99% probability of finding a desired sequence represented in a library created by digestion with a 6-cutter?

Thus, from this type of analysis we can see that we need a technology which will allow us to achieve the following:

Bacteriophage l is an E. coli phage with a type of icosahedral phage particle which contains the viral genome: The advantages of this type of system vs plasmids like pBR322 are:

Complete digestion with an endonuclease will result in a library containing no overlapping fragments:

However, incomplete digestion will result in a library containing overlapping fragments:

Once a library (cDNA or genomic) has been constructed we want to be able to identify clones which contain DNA of interest.

In standard methodologies the oligonucleotide is phosphorylated at the 5' end with radiolabeled g32P-ATP and T4 polynucleotide kinase. 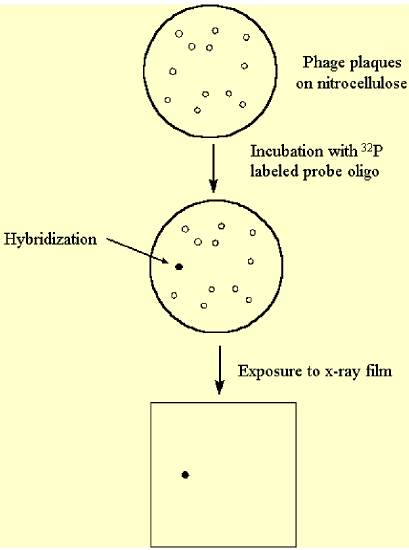 If we are designing DNA probes from protein sequence information we will have possible ambiguity in our deduced DNA sequence used for the design of the probe.

During oligonucleotide synthesis multiple bases will be incorporated at ambiguous positions.

If the particular vector, or phage, used to construct a cDNA library contains a promoter region upstream of the insertion site we may be able to screen for desired clones by looking for expression of the protein of interest.

One of the defense mechanisms of vertebrates is the ability to distinguish between self and non-self molecules. Antibodies are synthesized by B lymphocytes. Each B lymphocyte is capable of producing a single type of antibody directed against a specific structural determinant, or epitope, on an antigen.

If the protein of interest has been purified it can be used to induce an immune response in a host animal.

An antibodiy isolated from a single B lymphocyte cell population is termed monoclonal.

Sometimes immunizing with the protein of interest is problematic: appropriate amounts of purified material cannot be produced, or the protein is itself toxic at the dosage level necessary to produce an immune response.

As with radiolabeled oligonucleotides, antibodies can be used to identify library clones which contain a cDNA of interest. This method would of course rely upon a host vector or phage which contains a promoter upstream from the site of insertion of the genomic DNA.