Gel electrophoresis is used to characterize one of the most basic properties - molecular mass - of both polynucleotides and polypeptides. Gel electrophoresis can also be used to determine: (1) the purity of these samples, (2) heterogeneity/extent of degradation, and (3) subunit composition.

The most common gel electrophoresis materials for DNA molecules is agarose and acrylamide.

The electrophoretic migration rate of DNA through agarose gels is dependent upon four main parameters:

1. The molecular size of the DNA. Molecules of linear duplex DNA travel through agarose gels at a rate which is inversely proportional to the log of their molecular weight. 2. The agarose concentration. There is an inverse linear relationship between the logarithm of the electrophoretic mobility and gel concentration. 3. The conformation of the DNA.

These different forms of the same DNA migrate at different rates through an agarose gel. Almost always the linear form (form-III) migrates at the slowest rate of the three forms and supercoiled DNA (form-I) usually migrates the fastest.

Finally, the DNA being an acidic molecule, migrates towards the positively charged electrode (cathode). Acrylamide gels are useful for separation of small DNA fragments typically oligonucleotides <100 base pairs. These gels are usually of a low acrylamide concentration (<=6%) and contain the non-ionic denaturing agent Urea (6M). The denaturing agent prevents secondary structure formation in oligonucleotides and allows a relatively accurate determination of molecular mass.

Protein gels are usually performed under denaturing conditions in the presence of the detergent sodium dodecyl sulfate (SDS). The proteins are denatured by heat in the presence of SDS. The SDS binds, via hydrophobic interactions, to the proteins in an amount approximately proportional to the size of the protein. Due to the charged nature of the SDS molecule the proteins thus have a somewhat constant charge to mass ratio and migrate through the gel at a rate proportional to their molecular mass, The proteins migrate towards the anode.

Since the SDS treatment will dissociate non-covalent protein complexes, they may thus exhibit a much lower than expected molecular mass on SDS polyacrylamide gel electrophoresis (SDS PAGE). Protein PAGE gels are usually polymerized between two glass plates and run in the vertical direction. PAGE may also be run in the presence of reducing agents, such as b-mercaptoethanol (BME). BME is a reducing agent which will reduce any disulfide bonds (e.g. as exists between some pairs of cysteine residues in a protein). This helps to remove residual secondary structure in the SDS treated protein, but it may also allow the separation of polypeptide fragments from each other (i.e. their covalent interaction was entirely made up of one or more disulfide bonds). Thus, an apparently single protein may exhibit a set of small fragments under reducing PAGE conditions.

The most convenient method to visualize DNA in gel electrophoresis is staining with the fluorescent dye ethidium bromide. This compound contains a planar group that intercalates between the stacked bases of DNA. The orientation and proximity of ethidium with the stacked bases causes the dye to display an increased florescence compared to free dye (in solution). U.V. radiation at 254 nm is absorbed by the DNA and transmitted to the bound dye and the energy is re-emitted at 590 nm in the red-orange region of the spectrum. 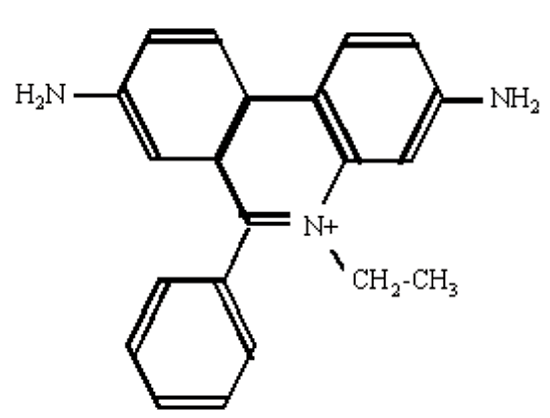 Ethidium bromide is usually prepared as a stock solution of 10 mg/ml in water, stored at room temp and protected from light. The dye is usually incorporated into the gel and running buffer, or conversely, the gel is stained after running by soaking in a solution of ethidium bromide (0.5 ug/ml for 30 min). The stain is visualized by irradiating with a UV light source (i.e. using a transiluminator) and photgraphing with polaroid film. The usual sensitivity of detection is better than 0.1 ug of DNA.

Because ethidium is a DNA intercalating agent, it is a powerful mutagen. Incorporation of ethidium in the DNA of living organisms (i.e. you and I) can cause (unwanted) mutations.