These 4 IMViC tests (actually 6 tests if you include motility and H2S) constitute, perhaps, the most critical tests used for identification of bacteria after the gram stain. The test results from these 6 tests should carry more weight than almost any other tests, certainly higher priority than sugar results since they are more stable reactions.

The SIM agar deep is a multi-test medium comprising 3 tests: sulfide (H2S gas), indole production, and motility. You have already tested for motility via the hanging drop slide and TTC, and here is an additional way to determine it (although not as good as TTC). The amino acid tryptophan can be converted by the enzyme tryptophanase into an end product called indole. This chemical is identified when it reacts with Kovac's reagent. Since the TTC agar deep is a better way to run motility, we use SIM for indole and sulfide production. Sodium thiosulfate is in this medium and can be utilized by bacteria, with the production of hydrogen sulfide. H2S is colorless. Ferric ammonium sulfite is in the medium to reaction with H2S, producing a black ferrous sulfide.

The MRVP tests are run together in the same broth and then split into 2 tubes when ready to be tested for the end products. The methyl red test determines the use of glucose, with the subsequent production of acid, tested for by the pH indicator methyl red. The Voges-Proskauer test also determines glucose use, but for a different end product---not acid but a neutral product called acetoin (or acetylmethylcarbinol). The VP is really important for identification of many bacteria, but it is a picky test, and MUST be done exactly right.

The citrate test identifies the use of citrate as a sole carbon source, since there are no other nutrients in this medium. The basic end products (carbonates, bicarbonates, and ammonium hydroxide) will cause the brom thymol blue indicator in the medium to turn from forest green to royal blue.

Methyl Red and Voges-Proskauer: AFTER INCUBATION

Within just a few seconds after adding methyl red reagent, you can see the red-pink color of acid presence from glucose use. 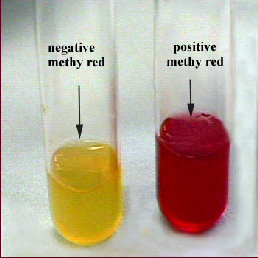 The reagents MUST be added in the correct order, in the correct amounts, and the tube must sit undisturbed,and open to the air (no cap) for at least 30 minutes (45 minutes is even better) as the light pink color intensifies at the top of the tube (the reagents react with acetoin). DO NOT shake the tube AFTER setting it down for the waiting period.

Some bacteria will have different VP reactions at 30º C vs. 37º C (noted in the identification books). You might want to run this test at different temperatures.

The alkaline by-products of citrate use will cause the pH indicator to turn royal blue. Be sure that you see both – and + test results of all of these tests by visiting other tables in the lab.