CNA is a selective, differential agar medium used for isolation of gram positive bacteria in a variety of specimen types. It is used frequently in clinical laboratories.

The selective/ inhibitory agent of CNA is the antibiotic naladixic acid, a quinolone drug similar to Cipro or Levaquin. This medium is basically blood agar, containing 5% sheep’s blood mixed with either TSA base or Columbia agar base. The differentiation of blood agar is due to the ability of many bacteria to hemolyze blood cells, using chemicals called hemolysins..

There are 3 categories of hemolytic patterns—alpha, beta, and gamma.

The best way to read hemolysis is to hold the plate up against a light source (sun or lights). 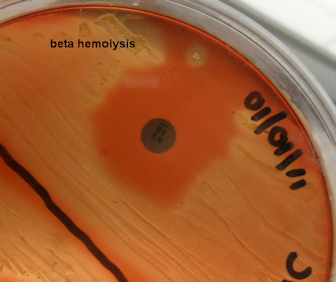