Evolution– includes all of the changes in the characteristics and diversity of life that occur throughout time.

Evolution can occur on both large and small scales.

›The concept of evolution, that organisms may change over time, was not new in Darwin’s time. ›However, it was not a widely accepted concept because no one understood how it could work. ›A mechanism was missing.

Darwin provided that mechanism with his theory of Natural Selection. In any population of organisms there is natural variation. ›Some of these variations will allow the organisms possessing them to survive and reproduce better than those without these particular traits. The successful traits will spread through the population. This change in the frequency of alleles in the population is evolution. Despite this high potential fertility, natural populations usually remain constant in size, except for small fluctuations. Not all of the potential offspring survive.

Which individuals will survive is often not a matter of luck. Populations show variation– individuals are not identical. They differ in many different traits.

Some of the variation between individuals in the population is heritable. It can be passed down from one generation to the next.

Some of the traits found in the population enhance the survival and reproduction of the organisms possessing them.

The favored traits will spread through the population. Over many generations, the species will become adapted to its environment. Over time, these changes can lead to the formation of a new species.

A species may become adapted to its environment in response to environmental pressures. A trait may be favored due to enhanced survival or reproduction when faced with a particular aspect of the environment.

When an environment changes, or when individuals move to a new environment, natural selection may result in adaptation to the new conditions. Sometimes this results in a new species.

Individuals do not evolve; populations evolve. ›Evolution is measured as changes in relative proportions of heritable variations in a population over several generations.

Natural selection is not the only way that allele frequencies can change from one generation to the next.

The smaller the sample, the greater the chance of deviation from expected results. These random deviations from expected frequencies are called genetic drift. Allele frequencies are more likely to deviate from the expected in small populations. Which allele gets lost is due to random chance. Over time, drift tends to reduce genetic variation through random loss of alleles. Sometimes a catastrophic event can severely reduce the size of a population. The random assortment of survivors may have different allele frequencies. This is a type of genetic drift called the bottleneck effect. The actions of people sometimes cause bottlenecks in other species. N. California elephant seal population reduced to 20-100 individuals in the 1890s. › Founder effect– Another type of genetic drift occurs when a small group of individuals becomes separated from the population and form a new population. The allele frequencies in their gene pool may be different than the original population. 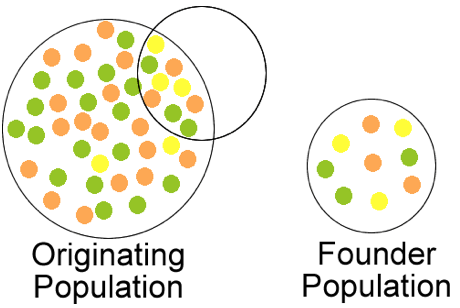