1. Description of the Cell Cycle and Mitosis

Why do cells divide?

Cell divide so that organisms can grow. In order for organisms to grow, body cells either have to increase their size or divide. Most cells divide, because smaller is better when it comes to cells.

Why do cells need to stay small? Why don't cells just keep getting bigger instead of multiplying?

Cells are limited in size because the outside (the plasma membrane) must transport food and oxygen to the inside of the cell. This can be represented by what is known as the surface to volume ratio. As a cell gets bigger, the outside is unable to keep up with the inside, because the inside grows at a faster rate than the outside. This is a problem because cells obtain nutrients and get rid of wastes through a process called diffusion. Diffusion works faster over short distances and takes longer over long distances. So if a cell grows larger instead of dividing, diffusion will be too slow and the cell will not be able to obtain nutrients and get rid of wastes efficiently, which ultimately would kill the cell. Thus, cells divide so that an organism can get bigger, despite the fact that cell size is limited. Interphase describes the period between cell divisions. Although it may seem as though the cell is inactive during interphase, quite the opposite is true.  During this phase (the longest phase of the cell cycle) the cell grows, DNA is replicated and the centrioles divide.

Interphase is divided into the following three subphases:

Mitosis (M Phase) is the process of nuclear division and is divided into the following phases:

Prophase is the first mitotic phase.  During prophase the nucleoli disappear and the chromatin (DNA and associated proteins) condenses into discrete chromosomes that are observable with a light microscope.  Each replicated chromosome is composed of two sister chromatids, both containing the same genetic information.  The sister chromatids are joined together at their centromeres.  The mitotic spindle forms from the centrioles and begins to elongate.  As the centrioles reach opposite ends of the cell the spindle fibers from each of the centrioles attach to each chromosome at a specialized protein structure called the kinetochore.  The kinetochore is located at the centromere of each chromosome.  Other spindle fibers elongate, but instead of attaching to chromosomes, they interact with spindle from the opposite pole.

Metaphase is the longest stage of mitosis.  It is during this stage that the tension applied by the mitotic spindle fibers aligns all of the chromosomes along the metaphase plate, an imaginary line the divides the cell in two. This organization is necessary to ensure that in the next phase, when the chromosomes are separated, each new nucleus will receive one copy of each chromosome.

Anaphase is the shortest stage of mitosis.  The spindle fibers shorten during anaphase, pulling the sister chromatids apart towards opposite ends of the cell.

Telophase marks the stage where the daughter chromosomes arrive at the poles and the spindle fibers begin to disperse.  Two daughter   nuclei form, nuclear envelopes are constructed and the chromosomes become less condensed.  Mitosis, which describes the division of the nucleus, is now complete.

Cytokinesis: The end of the Cell Cycle

Cytokinesis describes the division of the cytoplasm and while it is not a stage of mitosis (nuclear division), but does result in the completion of cell division and the end of the cell cycle. In animal cells, cytokinesis involves the formation of a cleavage furrow, which pinches the cell into two distinct daughter cells. 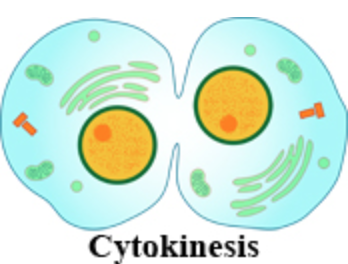