Information that will guide the development of an organism is contained in that organism’s DNA. Every species has a characteristic number of DNA molecules called chromosomes.  An individual receives one complete set of chromosomes from each parent, resulting in two complete sets. This is the diploid condition (2n).

Chromosomes occur in pairs called homologous chromosomes.  One from each parent. Genes are the functional unit of heredity.  Chromosomes are made up of genes that code for traits.  A gene is found at a specific location or locus on a chromosome. There can be any number of alleles for a given gene, although an individual can have only two alleles(one on each homologous chromosome).

Some traits are controlled by just one gene, others are influenced by many genes (polygenic).

Since an individual has two sets of chromosomes, it will have two copies of each gene (one originally coming from each parent). These two copies may be the same allele, or they may be different.

A trait is dominant if it is expressed in an individual with one or two copies of the allele:

The trait is said to be recessiveif it is necessary for an individual to have two copies of the allele in order to express the trait.

Genotype refers to the alleles that are actually present.

Phenotype refers to the visible or expressed characteristics of the trait.

An individual can pass on genetic information to its offspring. In order to avoid doubling the number of chromosomes in each generation, cells must be created that carry only one set of chromosomes (haploid or 1n).

An individual can pass along either of the two alleles it carries for a trait, but not both.

A Pp individual can pass on either P or p.

These haploid cells (eggs or sperm) are formed during meiosis.

Meiosis is a type of cell division that occurs in two parts.

Before division starts, each chromosome makes a copy of itself. These identical copies (called sister chromatids) remain connected at the centromere. 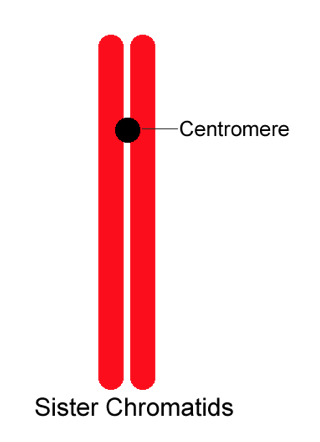 In the first part of meiosis, homologous chromosomes are separated.

During the second part of meiosis, the sister chromatids are pulled apart.

The division of one diploid cell will result in 4 haploid cells. We can look at how traits are passed from one generation to another individually or two at a time using a Punnett square.

For our example, we will use the ball python. There are many mutations that breeders want to incorporate into their animals.

First let’s focus on the albino trait. It is recessive so: In a monohybrid cross we will cross two animals that are heterozygous for albino.

Place the alleles that may be donated by each parent across the top and along the sides.

Fill in the boxes: 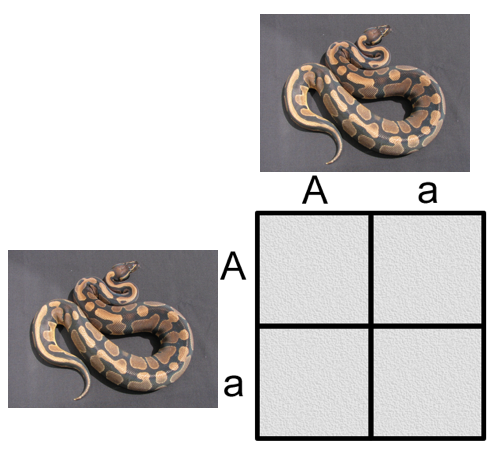 Again, we want to know, statistically, what kind of offspring to expect.

Each parent (AaPp) will donate either an A or an a allele for the albino gene and either a P or a p allele for the pinstripe gene.  So every gamete will always contain ONE A (or a) andone P (or p).

We can use the FOIL method from math to be sure that we have all of the possible combinations of alleles.

Next, we fill in each square. By convention, we put the alleles for one gene together followed by the second:

Also, any dominant alleles are placed before recessives. The Punnett square gives us the genotypes that result from the cross. The phenotypes would be:

Albino is a recessive trait, while pinstripe is a dominant trait. The 9:3:3:1 phenotypic ratio is characteristic of a dihybrid cross.

Punnett squares are very useful for tracking one or two traits, but they can become unwieldy when looking at more than two traits.  The product rule is a simple way to determine the likelihood of getting a particular result from any cross, regardless of the number of traits involved.

To use the product rule, we determine the likelihood of getting each trait individually, then multiply those probabilities together. We’ll use our dihybrid cross example to start with.

We need to look at the traits separately:

What is the chance of getting an albino pinstripe from this cross?

This is the same result that we got using the Punnett square.

We can look at as many traits as we want using the product rule.  Say we are interested in combining these 4 traits:

Calculate probability of getting individual traits: