Used to determine if a bacterium has enzyme cytochrome oxidase. The reagent is colorless if negative and turns blue/purple when oxidized.

2. Add loopful of a single species of bacteria from your plate to the slide; bubbles = positive result

3. Repeat for all four bacteria AND YOUR ASSIGNED BACTERIA from your TSA plate

4. Swipe bacteria from your assigned PLATE onto a cotton swab.

5. Dispense 1-2 drops of the oxidase reagent onto the swab and record result.

6. Repeat for all four bacteria AND YOUR ASSIGNED BACTERIA from your TSA plate. Complete the following for each tube of the four tubes of nitrate broth. Observe the inverted Durham tube. If bubbles are present, then the following reaction has occurred and your bacteria is positive for nitrite and nitrate reductase:

1. If gas is NOT present, then add 3 drops of sufanilic acid (reagent A) and 3 drops of naphthlamine (reagent B) to your tube. Mix gently by tapping the bottom of the tube and wait 2-3 minutes. If your tube turns red, then bacteria is positive for nitrate reductase and the following reaction has occurred:

2. If no red color is observed, add a TINY amount of powdered zinc using a toothpick and mix gently by tapping the bottom of the tube.

If your sample turns red after step 2, DO NOT do step 3

3. Wait 15 minutes. If your tube turns red, then NO3 is still present and bacteria are nitrate reductase negative.

Hint for lab practical – if I give you a red tube, how can you tell if it is nitrate positive or negative?

4. Add enough iodine reagent to flood your plate. WAIT 5 MINUTES. The presence of clear halos surrounding colonies is positive for their ability to digest the starch and indicates the presence of alpha-amylase.

5. Place your gelatin tube in the ice bucket provided by the instructor for 10 minutes. Then, hold your tube sideways to determine if it is solid (negative result) or liquid (positive result). RECORD RESULTS FOR:

6. Record your results for your assigned bacteria using the table below.

7. Add 5 drops of Kovacs reagent to the tube to detect indole production.

8. Using a glass Pasteur pipet, take 1 ml out of your MR-VP broth tube and place it into a new tube

10. Using a glass pipet take 1 ml out of MR-VP broth tube and place it into a new tube 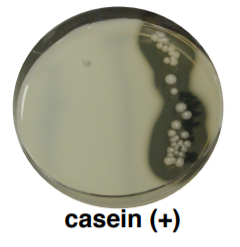 Casein is a large globular protein that gives milk its white and opaque color. It is too large to be transported across the cell membrane. Bacteria that have the exoenzyme 'casease' are able to hydrolyze casein by secreting this enzyme into the environment around them. Clear halos surrounding colonies are indicative of their ability to digest the casein and results in a zone of clearance around plated growth. (+) = halo (-) = no halo

Catalases are enzymes that convert hydrogen peroxide (H2O2) into water and oxygen gas. When a drop of peroxide is placed on catalase-producing bacteria, bubbles appear when the oxygen gas is formed. This is a test for aerobic (able to use oxygen) catalase-positive bacteria such as Staphylococcus and Micrococcus.

Used for the detection of gram-negative enteric bacilli based on the ability of an organism to use citrate as the sole source of carbon and energy. Organisms capable of utilizing ammonium dihydrogen phosphate and citrate will grow unrestricted on this medium. Bromothymol blue acts as a pH indicator, causing the medium to change from green (neutral) to blue (alkaline) with increasing pH. Citrate utilization produces an alkaline carbonate, resulting in a deep blue color change within the agar. The medium will remain green if organisms do not grow or are not able to metabolize sodium citrate. For the differentiation of gram-negative enteric bacilli based on their ability to break down specific amino acids. The production of the enzymes that break down amino acids (decarboxylase & dihydrolase enzymes) is induced in an acidic environment.

Microorganisms possessing the specific decarboxylase and dihydrolase enzymes for the amino acid (arginine, lysine or ornithine) degrade the amino acid to yield various amine by-products which create an alkaline environment that turns the indicator purplish. If the organism does not produce the appropriate enzyme, then the medium will remain yellow.

Nutrient gelatin is a differential medium that tests the ability of an organism to produce an exoenzyme, called gelatinase, that hydrolyzes gelatin. When gelatin is broken down, it can no longer solidify. If an organism can break down gelatin, the areas where the organism has grown will remain liquid even if the gelatin is chilled. A medium that contains protein, glucose, and phosphate buffer. Some bacteria produce an acid while other bacteria further metabolize the acid to pH stable end products (Glucose→Acid→Stable End Product). The MR test is used to detect organisms capable of performing mixed acid fermentation where:

The VP Test is designed for organisms who are able to ferment glucose to acids which are then converted to acetoin and 2,3 butanediol. The addition of VP reagents oxidizes acetoin to diacetyl and reacts with guanidine nuclei from the peptones to produce a red color. Remember:

Selective for gram-positive bacteria (e.g. Staphylococcus and Micrococcus). Mannitol fermentation by pathogenic staphylococci, such as S. aureus, is indicated by the media changing to yellow. After incubating the nitrate broth, sulfanilic acid (reagent A or 1) and α-naphthylamine (reagent B or 2) are added. If a red-colored compound forms then nitrate reduction has occurred (NO3→NO2).

An inverted Durham tube tests for the presence of nitrogen gas (N2).

If neither a red color or gas is observed, then, confirmation is necessary that nitrate (NO3) remains in the broth. A SMALL addition of zinc dust will convert the nitrate to nitrite and form a red color. This test reaction is considered negative for nitrate reduction.

Used to determine if a bacterium has enzyme cytochrome oxidase. The final stage of bacterial respiration involves a series of membrane-embedded components collectively known as the electron transport chain. The final step in the chain may involve the use of the enzyme cytochrome oxidase, which catalyzes the oxidation of cytochrome c while reducing oxygen to form water. The reagent is usually N,N,N′,N′-tetramethyl-p-phenylenediamine (TMPD) or N,N-dimethyl-pphenylenediamine (DMPD), which is also a redox indicator. The reagent is colorless if negative, the color turns blue/purple when oxidized. A general-purpose differential test medium typically used to differentiate gram-negative enteric bacteria. It contains peptone, phenol red (a pH indicator), one carbohydrate (i.e glucose or lactose), and a Durham tube to test for the ability to convert the end product of glycolysis, pyruvic acid, into CO2 gas.

For the differentiation of gram-negative enteric bacilli on the basis of sulfide production, indole formation, and motility. H2S production is detected when ferrous sulfide, a black precipitate, is produced as a result of ferrous ammonium sulfate reacting with H2S gas. Casein peptone is rich in tryptophan, bacteria that possess the enzyme tryptophanase degrade tryptophan to indole. Indole is detected upon the addition of Kovacs Reagent producing a red band at the top of the medium. The semi-solid agar allows for the detection of bacterial motility. Motile organisms extend from the stab line and produce turbidity or cloudiness throughout the medium. Non-motile organisms grow only along the stab line and leave the surrounding medium clear. Starch is too large to pass through the plasma membrane and must be split into individual glucose molecules. Bacteria that have the exoenzyme amylase are able to hydrolyze starch by secreting these enzymes into the environment around them. After bacteria are allowed to grow, iodine is added to detect the presence of starch. Iodine complexes with starch to form a blue-black color in the culture medium. Clear halos surrounding colonies is indicative of their ability to digest the starch and results in a zone of clearance around plated growth. (+) = halo (-) = no halo 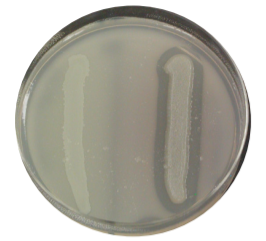 Tributyrin oil is a type of lipid called a triglyceride. It is too large to be transported across the cell membrane. Bacteria that have the exoenzyme lipase are able to hydrolyze tributyrin oil and break it down. Tributyrin oil forms an opaque suspension in the agar. When an organism produces lipase and breaks down the tributyrin, a clear halo surrounds the areas where the lipase-producing organism has grown. (+) = halo (-) = no halo

Tests the ability of bacteria to ferment sugars and to reduce sulfur to H2S, often used to identify Salmonella and Shigella. Medium contains sugars (lactose, sucrose, and glucose) and thiosulfate. Slant/deep allows for aerobic and anaerobic growth conditions. An alkaline/acid (red slant/yellow butt) reaction is indicative of glucose fermentation only. An acid/acid (yellow slant/yellow butt) reaction indicates the fermentation of glucose, lactose and/or sucrose. The absence of carbohydrate fermentation results in an alkaline/alkaline (red slant, red butt) reaction. If an organism can reduce sulfur, the hydrogen sulfide (H2S) gas which is produced will react with the ferrous ammonium sulfate ((NH4)2Fe(SO4)2 · 6H2O) to form iron sulfide (FeS), which appears as a black precipitate. If CO2 gas is produced, then the agar will be lifted or cracked as a result. Tests the ability of an organism to hydrolyze urea to ammonia and carbon dioxide using the enzyme urease. The broth contains urea and a very small amount of nutrients for the bacteria. The pH indicator is phenol red. If the urea in the broth is degraded and ammonia is produced, the pH rises and the media turns pink.

You must work independently on this project! You will receive no help in staining, performing tests, interpreting tests, or even focusing the microscope other than your lab notebook and your flowchart. There should be NO conversations between students about their unknown experiment. You CAN NOT take pictures. I reserve the right to penalize students for giving or receiving unauthorized help from other students.

Each student will receive a broth culture of their unknown bacteria. The tube will be marked with a number only. Record this number and write it on all plates and tubes that you inoculate, along with your name and the date.