Dissection is a powerful tool that provides us a profound understanding of our own anatomy and physiology as living, breathing creatures and also helps us to develop a stronger understanding of evolutionary relationships between taxonomic groups. What sort of dissection experiences do you already have? As you begin this sequence of dissections, please keep in mind several things. Dissection should be done thoughtfully and respectfully. It is important to take your time carefully and to think about what you are doing. This care will help you to preserve structures for the next several weeks and will make review easier. Also, merely identifying structures is insufficient to develop fully an appreciation for how these structures work. You must think about the function of these structures. How do they work?! Also, please do these dissections respectfully. These organisms were euthanized so that we might have a wonderful opportunity to learn something greater about the living world. Please keep that in mind as you are working.

Determine the Sex of Your Pig:

1. Before you start dissecting, examine the outside of the pig and determine its sex. Look for these features:

Also, both males and females have nipples, just as in humans. 2. Make sure you are familiar with anatomical terms of reference: anterior (front), posterior (back), dorsal (above), ventral (below).

In addition, you’ll need to know the following terms:

*label the sides on the pig picture above*

Make sure you know the locations of all the bold words on this handout.

You will now work on opening the abdominal and thoracic cavities of the pig and identify structures. Remember, that to dissect means to "cut into pieces" from Latin 'dessicare '- a careful dissection will make it easier for you to find the organs and structures. Be sure to follow all directions. 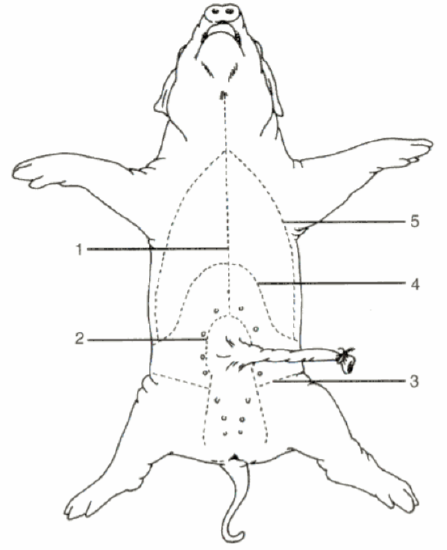 Place your fetal pig in the dissecting pan ventral side up. Use string to tie the legs behind the back of the pan. Use scissors to cut through the skin and muscles according to the diagram. Do not remove the umbilical cord.

After completing the cuts, locate the umbilical vein that leads from the umbilical cord to the liver. You will need to cut this vein in order to open up the abdominal cavity.

Your pig may be filled with water and preservative, drain over the sink if necessary.

Using the diagram to the right begin your dissection in the neck region. Try to cut as little as possible. Once you open the body cavity, you will generally be able to separate the different organs by simply pulling them apart with your fingers, forceps, or a probe. The more you cut things up, the harder it will be to figure out what you’re looking at. Cut midline on the ventral surface of the neck to expose the underlying muscles. Carefully separate the muscles to observe the underlying structures. Locate and understand the functions of the following structures:

Locate and understand the functions of the following structures:

Identify the Organ (or Structure):

Arteries, which carry high-pressure blood away from the heart, are generally thicker walled than veins, which carry lower-pressure blood back to the heart. Mammalian hearts have four chambers. Each side of the heart has an atrium that receives blood from elsewhere in the body and a ventricle that pumps the blood out of the heart. The right atrium receives blood from the systemic circulation and passes it to the right ventricle, which pumps the blood to the pulmonary circuit. After the blood passes through the lungs it goes to the left atrium and then into the left ventricle, which pumps the blood into the systemic circuit. The first part of the systemic arterial circuit is the aorta, which soon branches out to supply various regions of the body.

Dissection of the Thoracic Cavity:

The diagram below only focuses on arteries and you do not need to know all of them.

1. Find the diaphragm again. Remember that the diaphragm separates the abdominal cavity from the thoracic cavity and it aids in breathing. Above the diaphragm, the center of the chest, is the heart. 2. Remove the pericardium, which is a thin membrane that surrounds the heart.

3. The structures visible on the heart are the two atria (12,13), the ventricle (14), which has two chambers not easily visible from the outside.

4. The most obvious vessel on the front of the heart is the pulmonary trunk (1). It curves upward and joins the aorta (2) - a vessel which arches from the heart and curves around to go to the lower part of the body -where it is called the abdominal (dorsal) aorta (9). The aorta supplies the body with blood.

5. Find the vessel anterior to the heart in the base of the neck. This is the common carotid (4).

7. Observe the coronary vessels (6) on the outside of the heart—these vessels supply blood to the muscle of the heart.

8. Lift the heart to look on its dorsal side (toward the back), you should be able to see the anterior and posterior vena cavae, which bring blood back to the heart from the body. In addition, you should also be able to find the left and right jugular veins that drain blood from the head and run parallel to the carotids. Veins are injected with blue latex.

Locate and understand the functions of the following structures:

Ovaries and Uterus (females) or Testes (males): The testes of males and the ovaries of females both arise from the same embryonic structures; however, the testes migrate during fetal development until they descend into the scrotal sac. The size of the testes varies significantly, depending on the age of the fetal pig.

On the next two pages label the diagrams of the female and male urogenital systems. This lab includes material that has been adapted from http://brianmccauley.net/bio-6a/bio-...tal-piganatomy, http://www.biologycorner.com/workshe...issection.html,

https://7zscience.wikispaces.com/Fetal+Pig+Dissection, and https://designeranimal2012.wikispaces.com/Wild+Pig and is licensed under a Creative Commons Attribution-NonCommercial-ShareAlike 4.0 International License.