Animals use muscles to convert the chemical energy of ATP into mechanical work. Three different kinds of muscles are found in vertebrate animals.

A single skeletal muscle, such as the triceps muscle, is attached at its

As the triceps contracts, the insertion is pulled toward the origin and the arm is straightened or extended at the elbow. Thus the triceps is an extensor. Because skeletal muscle exerts force only when it contracts, a second muscle - a flexor - is needed to flex or bend the joint. The biceps muscle is the flexor of the lower arm. Together, the biceps and triceps make up an antagonistic pair of muscles. Similar pairs, working antagonistically across other joints, provide for almost all the movement of the skeleton.

Skeletal muscle is made up of thousands of cylindrical muscle fibers often running all the way from origin to insertion. The fibers are bound together by connective tissue through which run blood vessels and nerves.Each muscle fibers contains:

The multiple nuclei arise from the fact that each muscle fiber develops from the fusion of many cells (called myoblasts). The number of fibers is probably fixed early in life. This is regulated by myostatin, a cytokine that is synthesized in muscle cells (and circulates as a hormone later in life). Myostatin suppresses skeletal muscle development. (Cytokines secreted by a cell type that inhibit proliferation of that same type of cell are called chalones.) Cattle and mice with inactivating mutations in their myostatin genes develop much larger muscles. Some athletes and other remarkably strong people have been found to carry one mutant myostatin gene. These discoveries have already led to the growth of an illicit market in drugs supposedly able to suppress myostatin.

Because a muscle fiber is not a single cell, its parts are often given special names such as

Although this tends to obscure the essential similarity in structure and function of these structures and those found in other cells. 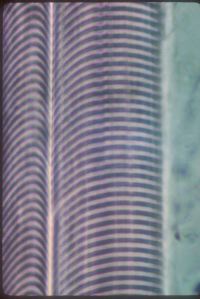 The nuclei and mitochondria are located just beneath the plasma membrane. The endoplasmic reticulum extends between the myofibrils. Seen from the side under the microscope, skeletal muscle fibers show a pattern of cross banding, which gives rise to the other name: striated muscle. The striated appearance of the muscle fiber is created by a pattern of alternating dark A bands and light I bands.

Each myofibril is made up of arrays of parallel filaments.

The anatomy of a sarcomere The entire array of thick and thin filaments between the Z disks is called a sarcomere.

The contraction of skeletal muscle is controlled by the nervous system. The Dying Lioness (an Assyrian relief dating from about 650 B.C.) shows this vividly. Injury to the spinal cord has paralyzed the otherwise undamaged hind legs. In this respect, skeletal muscle differs from smooth and cardiac muscle. Both cardiac and smooth muscle can contract without being stimulated by the nervous system. Nerves of the autonomic branch of the nervous system lead to both smooth and cardiac muscle, but their effect is one of moderating the rate and/or strength of contraction.

Figure 15.10.2.4: The Dying Lionesssupplied through the courtesy of The Trustees of the British Museum

Nerve impulses (action potentials) traveling down the motor neurons of the sensory-somatic branch of the nervous system cause the skeletal muscle fibers at which they terminate to contract. The junction between the terminal of a motor neuron and a muscle fiber is called the neuromuscular junction. It is simply one kind of synapse. (The neuromuscular junction is also called the myoneural junction.) The terminals of motor axons contain thousands of vesicles filled with acetylcholine (ACh). Many of these can be seen in the electron micrograph on the left (courtesy of Prof. B. Katz).

When an action potential reaches the axon terminal, hundreds of these vesicles discharge their ACh onto a specialized area of postsynaptic membrane on the muscle fiber (the folded membrane running diagonally upward from the lower left). This area contains a cluster of transmembrane channels that are opened by ACh and let sodium ions (Na+) diffuse in.

Before the latent period is over,

The brief (1–2 msec) period needed to restore the resting potential is called the refractory period.

The process of contracting takes some 50 msec; relaxation of the fiber takes another 50–100 msec. Because the refractory period is so much shorter than the time needed for contraction and relaxation, the fiber can be maintained in the contracted state so long as it is stimulated frequently enough (e.g., 50 stimuli per second). Such sustained contraction is called tetanus.

In the above figure:

As we normally use our muscles, the individual fibers go into tetanus for brief periods rather than simply undergoing single twitches.

As a muscle contracts,

Conversely, as a muscle is stretched,

If a stimulated muscle is held so that it cannot shorten, it simply exerts tension. This is called an isometric ("same length") contraction. If the muscle is allowed to shorten, the contraction is called isotonic ("same tension").

All motor neurons leading to skeletal muscles have branching axons, each of which terminates in a neuromuscular junction with a single muscle fiber. Nerve impulses passing down a single motor neuron will thus trigger contraction in all the muscle fibers at which the branches of that neuron terminate. This minimum unit of contraction is called the motor unit.

The size of the motor unit is small in muscles over which we have precise control. Examples:

ATP is the immediate source of energy for muscle contraction. Although a muscle fiber contains only enough ATP to power a few twitches, its ATP "pool" is replenished as needed. There are three sources of high-energy phosphate to keep the ATP pool filled.

The pool of creatine phosphate in the fiber is about 10 times larger than that of ATP and thus serves as a modest reservoir of ATP.

Skeletal muscle fibers contain about 1% glycogen. The muscle fiber can degrade this glycogen by glycogenolysis producing glucose-1-phosphate. This enters the glycolytic pathway to yield two molecules of ATP for each pair of lactic acid molecules produced. Not much, but enough to keep the muscle functioning if it fails to receive sufficient oxygen to meet its ATP needs by respiration.

However, this source is limited and eventually the muscle must depend on cellular respiration.

Cellular respiration not only is required to meet the ATP needs of a muscle engaged in prolonged activity (thus causing more rapid and deeper breathing), but is also required afterwards to enable the body to resynthesize glycogen from the lactic acid produced earlier (deep breathing continues for a time after exercise is stopped). The body must repay its oxygen debt.

Type I vs. Type II Fibers

Several different types of muscle fiber can be found in most skeletal muscles: Type I and and 3 subtypes of Type II fibers. Each type differs in the myosin it uses and also in its structure and biochemistry.

The other subtypes of Type II fibers have properties intermediate between those of Type IIb and Type I.

Most skeletal muscles contain some mixture of Type I and Type II fibers, but a single motor unit always contains one type or the other, never both.

In mice, the number of Type I vs Type II fibers can be changed with exercise and drug treatment. Whether the same holds true for humans remains to be seen. Perhaps training in humans does not alter the number of fibers of a particular type but may increase the diameter of one type (e.g., Type I in marathoners, Type IIb in weight lifters) at the expense of the other types.

Cardiac or heart muscle resembles skeletal muscle in some ways: it is striated and each cell contains sarcomeres with sliding filaments of actin and myosin. However, cardiac muscle has a number of unique features that reflect its function of pumping blood.

This electron micrograph (reproduced with permission from Keith R. Porter and Mary A. Bonneville, An Introduction to the Fine Structure of Cells and Tissues, 4th ed., Lea & Febiger, Philadelphia, 1973) shows an adherens junction and several of the other features listed here.

Smooth muscle is made of single, spindle-shaped cells. It gets its name because no striations are visible in them. Nonetheless, each smooth muscle cell contains thick (myosin) and thin (actin) filaments that slide against each other to produce contraction of the cell. The thick and thin filaments are anchored near the plasma membrane (with the help of intermediate filaments).

Smooth muscle (like cardiac muscle) does not depend on motor neurons to be stimulated. However, motor neurons (of the autonomic system) reach smooth muscle and can stimulate it or relax it depending on the neurotransmitter they release (e.g. noradrenaline or nitric oxide, NO).

Smooth muscle can also be made to contract

The contraction of smooth muscle tends to be slower than that of striated muscle. It also is often sustained for long periods. This, too, is called tonus but the mechanism is not like that in skeletal muscle.

Together myosin, actin, tropomyosin, and troponin make up over three-quarters of the protein in muscle fibers. Some two dozen other proteins make up the rest. These serve such functions as attaching and organizing the filaments in the sarcomere and connecting the sarcomeres to the plasma membrane and the extracellular matrix. Mutations in the genes encoding these proteins may produce defective proteins and resulting defects in the muscles.

The gene for dystrophin is on the X chromosome, so these two diseases strike males in a typical X-linked pattern of inheritance.

A treatment for DMD Deletions of one or more exons in the huge dystrophin gene are the cause of most of the cases of DMD. Exon 50 is a particularly notorious offender. When it is deleted, splicing of the pre-mRNA introduces a frameshift which then introduces a premature termination codon resulting in no functional dystrophin synthesized ("B"). However, an antisense oligonucleotide targeted to exon 51 causes the splicing mechanism to skip over it resulting in the stitching together of exons 49 and 52. This restores the correct reading frame so that only a slightly-altered version of dystrophin is produced, i.e., a BMD-type dystrophin ("C"). Seventeen weeks of weekly injections of 12 young DMD patients in the Netherlands with the oligonucleotide caused their muscles to synthesize sufficient amounts of dystrophin to enable 8 of them to walk better than before. (See Goemans, N., et al., in the 21 April 2011 issue of The New England Journal of Medicine.

Three research groups have used the CRISPR-Cas9 genome editing system to remove a mutated exon in DMD mice. The treatment restored dystrophin synthesis and improved skeletal and cardiac muscle function in the mice.

Myasthenia gravis is an autoimmune disorder affecting the neuromuscular junction. Patients have smaller end plate potentials (EPPs) than normal. With repeated stimulation, the EPPs become too small to trigger further action potentials and the fiber ceases to contract. Administration of an inhibitor of acetylcholinesterase temporarily can restore contractility by allowing more ACh to remain at the site.

Patients with myasthenia gravis have only 20% or so of the number of ACh receptors found in normal neuromuscular junctions. This loss appears to be caused by antibodies directed against the receptors. Some evidence:

The reason some people develop autoimmune antibodies against the ACh receptor is unknown.

Cardiac muscle, like skeletal muscle, contains many proteins in addition to actin and myosin. Mutations in the genes for these may cause the wall of the heart to become weakened and, in due course, enlarged. Among the genes that have been implicated in these diseases are those encoding:

The severity of the disease varies with the particular mutation causing it (over 100 have been identified so far) . Some mutations are sufficiently dangerous that they can lead to sudden catastrophic heart failure in seemingly healthy and active young adults.