The human kidneys are two bean-shaped organs, one on each side of the backbone. They represent about 0.5% of the total weight of the body, but receive 20–25% of the total arterial blood pumped by the heart. Each contains from one to two million nephrons. The nephron is a tube closed at one end and open at the other. It consists of:

The Bowman's capsules are packed in the cortex of the kidney, the tubules and collecting ducts descend into the medulla. The image above shows a cut section of the cortex of a mouse kidney as seen under the scanning electron microscope. Near the top (center) can be seen a Bowman's capsule with its glomerulus. Directly beneath is another Bowman's capsule with its glomerulus removed. The remainder of the field shows the lumens of both proximal and distal tubules as they have been cut at various angles.

The nephron makes urine by filtering the blood of its small molecules and ions and then reclaiming the needed amounts of useful materials. Surplus or waste molecules and ions are left to flow out as urine. In 24 hours the kidneys reclaim: ~1,300 g of NaCl, ~400 g NaHCO3, ~180 g glucose and almost all of the 180 liters of water that entered the tubules. Blood enters the glomerulus under pressure. This causes water, small molecules (but not macromolecules like proteins) and ions to filter through the capillary walls into the Bowman's capsule. This fluid is called nephric filtrate. As the table shows, it is simply blood plasma minus almost all of the plasma proteins. Essentially it is no different from interstitial fluid. 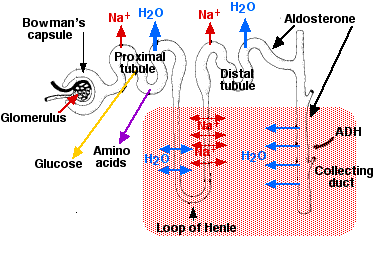 Although 97% of the sodium has already been removed, it is the last 3% that determines the final balance of sodium and hence water content and blood pressure in the body. The reabsorption of sodium in the distal tubule and the collecting ducts is closely regulated by the synergistic action of the hormones vasopressin and aldosterone.

This disorder is characterized by excretion of large amounts of a watery urine (as much as 30 liters - about 8 gallons each day and unremitting thirst.

It can have several causes:

The most obvious effect of this rare inherited disorder is extremely high blood pressure (hypertension). It is caused by a single mutant allele (therefore the syndrome is inherited as a dominant trait) encoding the aldosterone-activated sodium channel in the collecting ducts. The defective channel is always "on" so too much Na+ is reabsorbed and too little is excreted. The resulting elevated osmotic pressure of the blood produces hypertension.

Although urine formation occurs primarily by the filtration-reabsorption mechanism described above, an auxiliary mechanism, called tubular secretion, is also involved. The cells of the tubules remove certain molecules and ions from the blood and deposit these into the fluid within the tubules.

Example: Excess hydrogen ions (H+) are combined with ammonia (NH3) to form ammonium ions (NH4+) and transported to the cells of the collecting ducts. Here the NH4+ dissociates back into ammonia and H+. Both are then secreted into the fluid within the collecting ducts (the protons by active transport).

The Kidney and Homeostasis

While we think of the kidney as an organ of excretion, it is more than that. It does remove wastes, but it also removes normal components of the blood that are present in greater-than-normal concentrations. When excess water, sodium ions, calcium ions, potassium ions, and so on are present, the excess quickly passes out in the urine. On the other hand, the kidneys step up their reclamation of these same substances when they are present in the blood in less-than-normal amounts. Thus the kidney continuously regulates the chemical composition of the blood within narrow limits. The kidney is one of the major homeostatic devices of the body.

Hormones of the Kidneys

as well as the enzyme renin.

The artificial kidney uses the principle of dialysis to purify the blood of patients whose own kidneys have failed.

The left portion of the figure ("Dialysis unit") shows the mechanism used today in artificial kidneys. Small molecules like urea are removed from the blood because they are free to diffuse between the blood and the bath fluid, whereas large molecules (e.g., plasma proteins) and cells remain confined to the blood. The bath fluid must already have had essential salts added to it to prevent the dangerous loss of these ions from the blood. Note that blood and bath fluid flow in opposite directions across the dialysis membrane. This "counter-current" exchange maintains a diffusion gradient through the entire length of the system. An anticoagulant is added to the blood so it will not clot while passing through the machine. The anticoagulant is neutralized as the blood is returned to the patient.

Artificial kidneys have proved of great benefit in helping patients of acute kidney malfunction survive the crisis until their own kidneys resume operation. They have also enabled people suffering from chronic kidney failure to remain alive, though at an enormous expense of time (often three sessions of 6 or more hours per week), money, and psychological well-being. Furthermore, although dialysis does a good job at removing wastes, it cannot perform the other functions of the kidney:

An Artificial Kidney of the Future?

In an attempt to solve these problems, a research team at the University of Michigan is experimenting with adding a "Bioreactor unit" (above) to the dialysis unit. The bioreactor consists of many hollow, porous tubes on the inner wall of which is attached a monolayer of proximal tubule cells (derived from pigs). The dialysis bath fluid passes through the lumen of the tubes where molecules and ions can be picked up by the apical surface of the cells. Discharge of essential molecules and ions (as well as hormones) at the basolateral surface of the cells places these materials back in the blood (just as the proximal tubule cells in the nephron normally do). So far, all the testing has been done using dogs, but the results seem promising. The ideal alternative to long-term dialysis is transplantation of a new kidney. The operation is technically quite easy. The recipient's diseased kidneys are usually left in place, but the renal arteries and veins are tied off except for the branches supplying the adrenal glands. The major problems is the shortage of donors suitably matched for histocompatibility molecules so as to avoid the problem of graft rejection by the recipient's immune system - that unless the donor and recipient are identical twins - "sees" the kidney as "foreign".