Enzymes are protein catalysts, they influence the kinetics but not the thermodynamics of a reaction 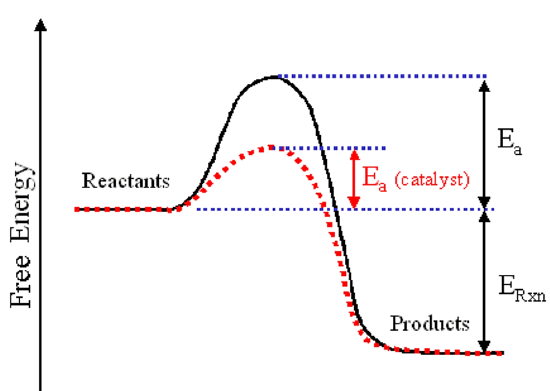 The Michaelis-Menten equation is a mathematical model that is used to analyze simple kinetic data. The model has certain assumptions, and as long as these assumptions are correct, it will accurately model your experimental data. The derivation of the model will highlight these assumptions.

In an enzyme catalyzed reaction the substrate initially forms a reversible complex with the enzyme (i.e. the enzyme and substrate have to interact for the enzyme to be able to perform its catalytic function). The standard expression to show this is the following:

Assumption #1 says we can ignore the k-2 reaction, therefore:

The rate of ES breakdown is a combination of the dissociation and the conversion to product:

Solve for the [ES] term (for reasons that will be given in the next step):

The actual reaction velocity measured at any given moment is given by:

Multiple both sides of the above equation by k2:

The maximum possible velocity (Vmax) occurs when all the enzyme molecules are bound with substrate [ES] = [E]total, thus:

Substituting this into the prior expression gives:

It is known as the Michaelis-Menten equation

There are a limited number of enzyme molecules and they can only perform a single reaction at a time. Thus, at high [S] the enzymes can be saturated

Thus, Km equals the substrate concentration that results in exactly one half the maximum possible reaction velocity The inhibitor (I) competes with the substrate (S) for the enzyme active site (also known as the S-binding site). Binding of either of these molecules in the active site is a mutually exclusive event

The expression for the Michaelis-Menten expression in the presence of a reversible competitive inhibitor is:

Where Ki is the actual EI complex dissociation constant

The effects of the reversible competitive inhibitor on the kinetics are as follows:

The diagnostic criteria for reversible competitive inhibition is that while the apparent Km is affected by addition of the inhibitor, the value of vmax does not change 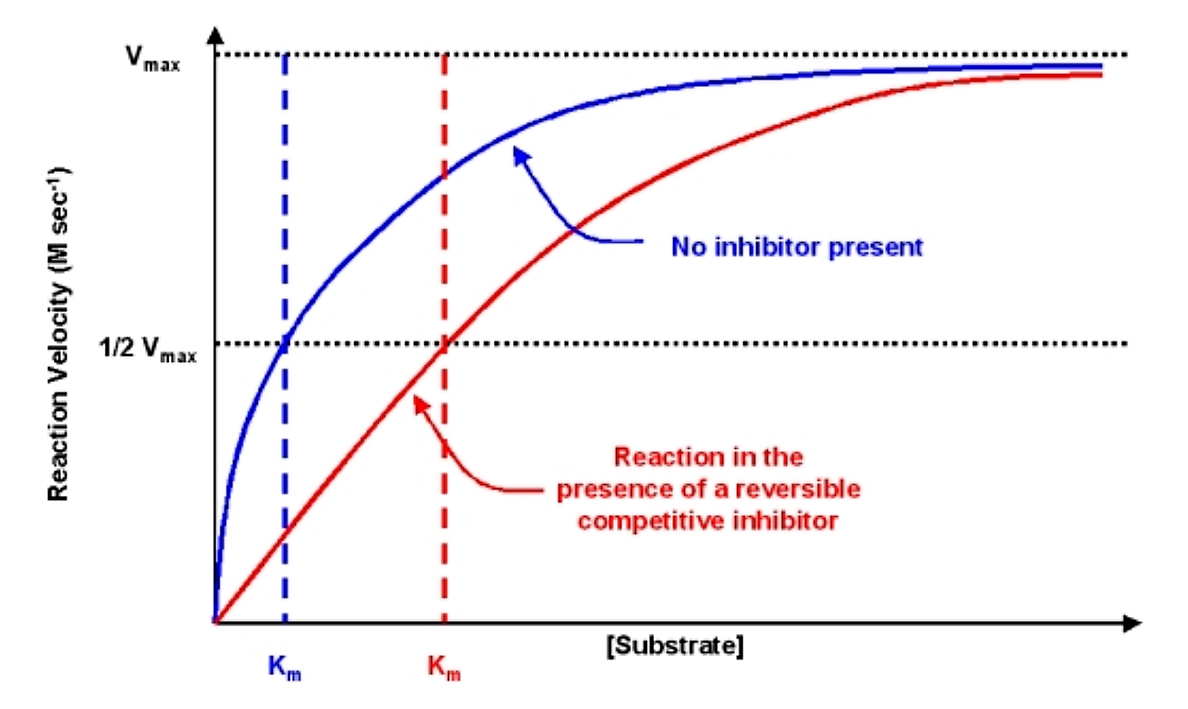 How is the Lineweaver-Burke double reciprocal plot affected by the presence of a reversible competitive inhibitor?