Molecular recognition is the foundation of many biological processes. A major emphasis in biotechnology is the development of synthetic recognition molecules and systems which are specific for a ligand of interest. One branch of molecular design involves the synthesis of molecules with specific stereochemical structure designed to recognize and interact with a particular ligand. In contrast, molecular imprinting is a method of constructing a molecule, with specific recognition properties, by having the ligand itself direct the assembly of the desired structure

The general approach of the technique is to combine the desired "imprint" molecule with a solution of small monomeric molecules which has several desired features. They have a variety of functional groups (e.g. hydrogen bond donors, acceptors, possibly acidic or basic groups, or aliphatic or aromatic groups). One or more of these groups can specifically interact with the imprint molecule (e.g. they can form specific hydrogen bonds). The monomeric molecules can be made to polymerize to form a rigid, or semi-rigid polymer. The imprint molecule is soluble in the monomer solution. The monomers, either in solution or during the polymerization process, do not form covalent bonds with the imprint molecule (the interaction is strictly non-covalent)

After polymerization of the monomers (in the presence of the imprint molecule) the general features of the polymer are as follows:

The typical polymer production technique has been to produce a bulk imprinted polymer and then grind it up to produce small particles (25 mm). Such small beads are appropriate for liquid chromatography methods (i.e. can be used as chromatographic resins and packed in a column). "Suspension" polymerization can yield beads directly from the polymerization process

Most of the reported molecular imprinted polymers reported have been made from monomers of acrylates, styrenes or silicates, and the imprinting step performed in organic solvents. Imprinting in organic solvents (e.g. low dielectric constant solvents) enhances hydrogen bonding (i.e. partial electrostatic) interactions. However, it can limit imprint molecules to those that are soluble in such solvents.

Imprinting of the amino acid L-phenylalanine with methacrylic acid monomers and the enantioselective binding of the imprint molecule. 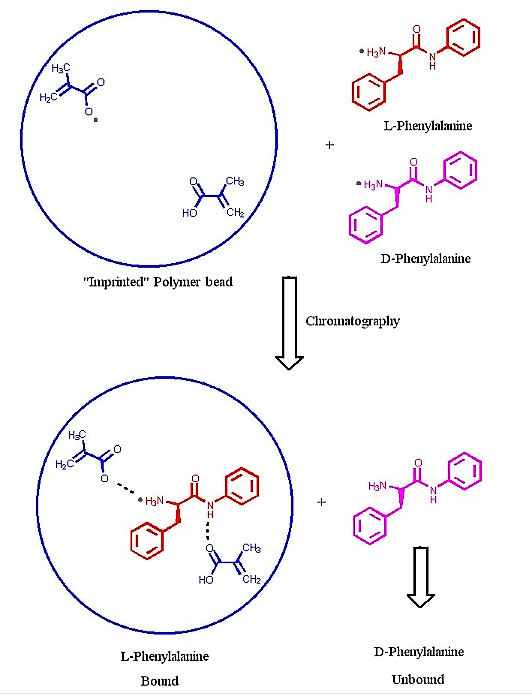 There are about 500 drugs on the market which are optically active, about 90% of these are administered as racemic mixtures. The FDA now requires that for optically active drugs both enantiomers must be treated as separate substances in pharmacokinetic and toxicology profiling. There is a great need for preparative methods of enantiomer separations

Figure 4.6.3: Closely related compounds that can be separated with MIP's

"biosensors" are devices which integrate specific receptor molecules with signal transduction devices. The transducer may convert the binding energy of the MIP/analyte into changes in protons, light absorbance, heat, etc. This physical/chemical signal is ampified and output to a measuring device. In principle, the analyte can be any molecule which can be specifically imprinted. For example, an environmental toxin. Although most work with MIP have involved small molecules, in principle it should be possible to extend MIP utility to include biomolecule recognition (i.e. proteins, nucleic acids). Such MIP should exhibit similar specificities. If MIP can mimic biomolecule binding sites, they may prove useful alternatives for the screening of new inhibitors, or antagonists. One potential limitation is that of "mutagenesis". Can a polymer which has already been imprinted be "mutagenized" (chemically modified?) to produce novel/enhanced recognition characteristics? Another limitation is that the exact stereochemical structure of the imprint is not known. Therefore, the structural information of a useful imprint is not available.