DNA (deoxyribonucleic acid) and RNA (ribonucleic acid) are composed of two different classes of nitrogen-containing bases: the purines and pyrimidines. The most commonly occurring purines in DNA are adenine and guanine: The most commonly occurring pyrimidines in DNA are cytosine and thymine: 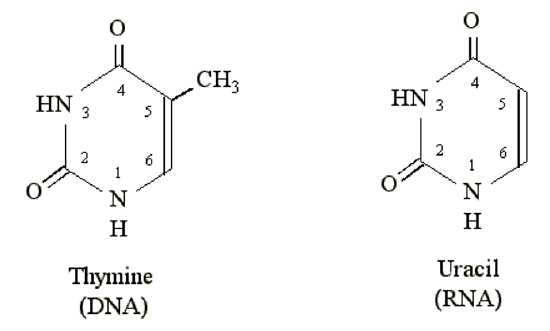 Purines and pyrimidines can form chemical linkages with pentose (5-carbon) sugars. The carbon atoms on the sugars are designated 1', 2', 3', 4' and 5'. It is the 1' carbon of the sugar that becomes bonded to the nitrogen atom at position N1 of a pyrimidine or N9 of a purine. DNA precursors contain the pentose deoxyribose. RNA precursors contain the pentose ribose (which contains an additional OH group at the 2' position): DNA and RNA are simply long polymers of nucleotides called polynucleotides. Only the a phosphate is included in the polymer. It becomes chemically bonded to the 3' carbon of the sugar moiety of another nucleotide: The primary chemical structure of polynucleotides was known (i.e. the 3'-5' phosphate linkage).

Take DNA from a variety of species and hydrolyze it to yield individual pyrimidines and purines. Determine the relative concentrations of the A, T, C and G bases.

Although different species had uniquely different ratios of pyrimidines or purines, the relative concentrations of adenine always equaled that of thymine, and guanine equaled cytosine.

X-ray diffraction studies of DNA fibers demonstrated that DNA adopted a highly ordered helical structure. Franklin concluded that two or more chains must coil around each other to form a helix. Some basic dimensions of the helix were calculated from the x-ray diffraction data.

Propose a three chain helical structure for DNA with the phosphate backbone in the center and the bases on the outside.

Identified a hydrogen bonding arrangement between models of thymine and adenine bases, and between cytosine and guanine bases which fullfilled Chargaff's rule: 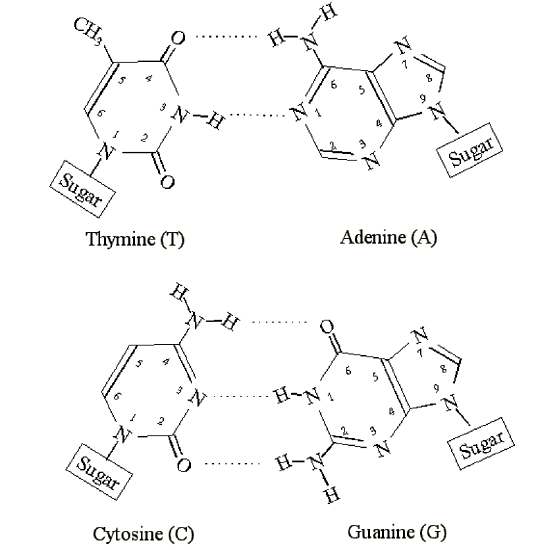 Note that the "TA" pair can overlay the "GC" pair with the bonds to the sugar groups in similar juxtaposition. In the "double helix" model of Watson and Crick the polynucleotide chains interact to form a double helix with the chains running in opposite directions. The bases are directed towards the center (and stack on top of one another) and the sugar backbones face the outside of the helix.

The Watson and Crick model had the following physical dimensions:

Consequenses of the model for genetic information:

The Watson and Crick paper was an exercise in brevity (1 page only in Nature). The structure was so rich with implication that quite a bit could be written. The authors, however, chose only to say "It has not escaped our notice that the specific pairing we have postulated immediately suggests a possible copying mechanism for the genetic material".