Water is a polar molecule. The oxygen atom in water has a greater electronegativity, or a stronger “pull,” on the electrons that it shares with the two hydrogens it is covalently bonded to. As a result, the molecule ends up having a partially negatively charged end, near the oxygen, and a partially positively charged end near the hydrogens. Much like a magnet, opposite charges will attract and similar ones will repel so that the slightly negatively charged oxygen of one water molecule will be attracted to the slightly positively charged hydrogen of a neighboring water molecule. This weak attraction and “sticking together” of polar molecules is called hydrogen bonding.

All life depends upon the unique features of water which result from its polar nature and ‘stickiness.’ Some of the unique properties of water that allow life to exist are:

Statistical analysis is used to collect a sample size of data which can infer what is occurring in the general population. Standard deviation (often reported as +/-) shows how much variation there is from the average (mean).

The formula for standard deviation is shown to the below, where     is the mean, xi is any given data value, and n is the sample size. Consider the following sample problem. Step 2: Determine the Deviation (xi - x̄ )2 from the mean for each value and square it, then add up all of the  total values.

mple size and variability. The formula used to calculate standard error of the mean is shown below. As standard error grows smaller, the likelihood that the sample mean is an accurate estimation of the population increases. It is common practice to add standard error bars to graphs, marking one or two standard error(s) above and below the sample mean (see figure to the right). Such bars give an impression of the precision of estimation of the mean in each sample. Typically, the length of the bars above and below the mean and the overlap of the bars as compared to one another is analyzed (see figures to the right). The length of the bars shows the spread around the mean. Shorter bars indicate less variability from the mean. If two or more error bars are the same size, they have similar spreads around their means. If a bar is longer than others, it has a larger spread around its mean.  In the graph shown, the white oak data shows the least amount of variation around its mean. 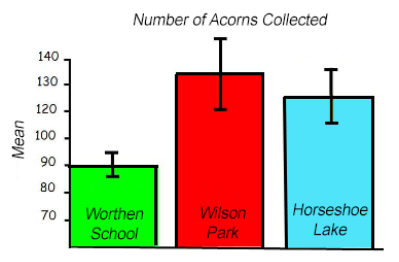 Pre-Lab Questions: Use the above background information and your textbook to answer the following questions.

1. Why is water considered to be polar?

2. Sketch a molecule of water (include the partial charges).

3. Which type of bonds form between the oxygen and hydrogen atoms of TWO DIFFERENT water molecules?

4. Which type of bonds form between the oxygen and hydrogen atoms of WITHIN a water molecule?

5. Explain what shorter error bars mean when you are analyzing data from a graph.

Question:  How will soap or alcohol affect the hydrogen bonds between different water molecules? Data Table 1: Number of Drops of Distilled Water Contained on the Surface of a Penny

Data Table 2: Statistical Analysis of the Number of Drops of Distilled Water Contained on the Surface of a Penny

Create an appropriately labeled bar graph to illustrate the sample means for the penny within 95% confidence (+/- 2 SEM). Don’t forget a title that includes the independent and dependent variables and axes labels with units. 1. Make a Claim about how soap and alcohol affects hydrogen bonds between water molecules.  This can be written as two separate claims.

2. Using data from this experiment, provide Evidence from your investigation that supports the claim(s).

3. Using background knowledge and data from this lab, provide Reasoning that uses the evidence to justify the claim and comment on how confident you are in your conclusions. Here, you may want to include deductive reasoning that uses the properties of water to explain why you obtained the results.

4. Suggest another experiment that you could perform that deals with surface tension. Write your question/hypothesis below and a brief description of how you would conduct the experiment.