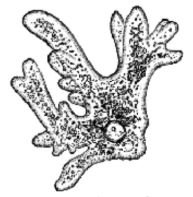 The ameba (also spelled amoeba) is a protozoan that belongs to the Kingdom Protista. The name ameba comes from the Greek word “amoibe”, which means "change". Protists are microscopic unicellular organisms that don't fit into the other kingdoms. Some protozoans are considered plant-like, such as algae, and others are considered animal-like. The ameba is considered an animal-like protist because it moves and consumes its food, but it is not classified as an animal because it consists of a single cell; it is unicellular.

Protists are also classified by how they move, some have cilia or flagella, but the ameba has an unusual way of creeping along by stretching its cytoplasm into fingerlike extensions called pseudopodia. The word "pseudopodia" means "false foot". On the coloring sheet, there are several pseudopodia, use a yellow highlighter or pencil to highlight each of them . When looking at ameba under a microscope, an observer will see that no ameba looks the same as any other, the cell membrane is very flexible and allows for the ameba to change shape. Color the cell membrane red . Amebas live in ponds or puddles, and can even live inside people.

There are two types of cytoplasm in the ameba, the darker cytoplasm toward the interior of the protozoan is called endoplasm, and the clearer cytoplasm that is found near the cell membrane is called ectoplasm. On the coloring, the endoplasm is indicated by the dotted area, and the ectoplasm by the white area. Color the endoplasm blue , and leave the ectoplasm uncolored. By pushing the endoplasm toward the cell membrane, the ameba causes its body to extend and creep along. It is also by this method that the ameba consumes its food. The pseudopodia extend out and wrap around a food particle in a process call phagocytosis. The engulfed food then becomes a food vacuole. There are several food vacuoles on the drawing – color each brown . The food will eventually be digested by the cell’s lysosomes.

Also visible in the ameba is the nucleus, which contains the ameba's DNA. Color the nucleus purple . In order to reproduce the ameba goes through mitosis, where the nucleus duplicates its genetic material and the cytoplasm splits into two new daughter cells, each identical to the original parent. This method of reproduction is called binary fission. Another structure easily seen in the ameba is the contractile vacuole, whose job is to pump out excess water so that the ameba does not burst. Color the contractile vacuole orange.

During unfavorable conditions, the ameba can create a cyst, this hard-walled body can exist for a long period of time until conditions become favorable again. At this point it opens up and the ameba emerges. Often cysts are created during cold or dry periods where the ameba could not survive in its normal condition. Color the cyst green.

Amebas can cause disease. A common disease caused by the ameba is called Amebic Dysentery. A person becomes infected by drinking contaminated water. The ameba then upsets the person's digestive system and causes cramps and diarrhea. A person is most likely to be infected in countries where the water is not filtered or purified.