HOW TO DETERMINE OXYGEN REQUIREMENTS

An excellent way to determine the oxygen needs of your bacterium is to grow it in different oxygen environments---atmospheric oxygen of 22%, no oxygen at all (GasPak jar), and reduced oxygen at less than 10% (candle jar)--and compare the quality and quantity of growth. The candle jar at right has 3-5% CO2 and 8-10% O2 (0.3% and 21% in the atmosphere, respectively). This is a handy way to determine if you have an aerobe which is microaerophilic, since they grow optimally under reduced (but present) oxygen conditions as in the candle jar. Many microaerophilic bacteria will grow poorly at 22% O2, whereas some will not grow at all (e.g. Neisseria gonorrhoea). Possibly the by-products of aerobic respiration, superoxide radicals and hydrogen peroxide, make it difficult for the microaerophiles to do well in 22% O2. Some microaerophiles are actually capnophilic (requiring elevated CO2 levels to grow). Strict aerobes may not grow well in a candle jar, depending on the species. The Gram+ genus Bacillus and Gram– genus Pseudomonas include aerobic bacillus-shaped bacteria. On the left is a GasPak jar, with a gas generator envelope inside. The environment is 0% O2,.

The newer anaerobic system (seen at right) consists of a plastic container (for the agar plates) and a paper gas generating sachet. The sachet contains ascorbic acid and activated carbon which reacts on exposure to air, when removed from the enclosed envelope. Oxygen is rapidly absorbed and CO2 is produced. When the paper sachet is placed in a sealed plastic pouch, this reaction will create ideal atmospheric conditions for the growth of anaerobes—anaerobic within 2.5 hours.
Because a GasPak jar looks the same, whether it has oxygen inside or not, an indicator strip, containing methylene, is included in the jar. Methylene blue is blue when oxidized, colorless when reduced. The carbon within the pouch reacts with free oxygen in the jar, producing 10-15% CO2.

Quite a few human pathogens are strict anaerobes, exemplified by the bacillus-shaped genera---Gram– Bacteroides, Bacillus (anthracis), and Gram+ Clostridium(tetani, botulinum).

Aerotolerants are anaerobes that can grow in the presence of O2 (compared to the strict anaerobes which would likely die), but they do not use it. And last, but very common, are the facultative anaerobes which prefer to use O2 when present but will grow without it.

Another way to culture and grow anaerobes is the use of reduced media--media without oxygen. Thioglycollate broth has a reducing agent in it---the chemical thioglycollate---which binds any free oxygen within the medium. You will also notice that these tubes have screw caps, allowing a tight closure, to reduce oxygen entry. However, some oxygen will be in the tube between the cap and the broth and there is no way to get rid of it. So there will be some diffusion of oxygen into the top portion of the broth, and that is where any aerobic bacteria may grow. An indicator, resazurin, in the medium will be a light pink in the area of higher oxygen. You can determine whether the bacterium is an anaerobe, facultative anaerobe, or an aerobe by checking out where the organism grows in the column of media. DO NOT SHAKE IT!

Oxygen will permeate the broth when this medium sits around for a while.

Check for the pink color: if so, boil the broth for 5 minutes (removes the oxygen). 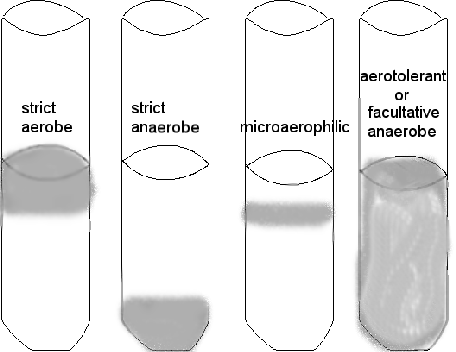 growth is indicated by gray area

Your instructor will give you the names at beginning of lab

Your instructor will set up the strict aerobe and the strict anaerobe cultures in thioglycollates for the class to view.

Compare the presence/absence of growth, as well as the quantity of growth on the 3 plates. Determine whether aerobic, anaerobic, or facultatively anaerobic.

Determine WHERE the most amount of growth occurs in the column of liquid---the top, the bottom, top to bottom. DO NOT SHAKE IT! Can you determine if the bacterium is aerobic, anaerobic, or facultatively anaerobic?

WRITE IN NAMES OF BACTERIA.

LABEL WITH NAMES OF BACTERIA.