The life of actively growing bacteria is not separated into a time for duplicating genes (i.e., DNA synthesis) and one for binary fission (dividing and partitioning the duplicated DNA into new cells). Instead, the single circular chromosmome of a typical bacterium is replicating even before fission is complete, so that the new daughter cells already contained partially duplicated chromosomes. Cell growth, replication and fission are illustrated below The roughly 30-60 minute life cycle of an actively growing bacterium is not divided into discrete phases. On the other hand, typical eukaryotic cells have a roughly 16-24 hour cell cycle (depending on cell type) that is divided into four separate phases. In the late 1800s, light microscopy revealed that some cells lost their nuclei while forming chromosomes (from chroma, colored; soma, bodies). In mitosis, paired, attached chromosomes (chromatids) were seen to separate and to be drawn along spindle fibers to opposite poles of dividing cells. Thus homologous chromosomes were equally partioned to the daughter cells at the end of cell division. Because of the same chromosomal behavior was observed in mitosis in diverse organisms, chromosomes were soon recognized as the stuff of inheritance, the carrier of genes!

The short period of intense mitotic activity was in stark contrast to the much longer ‘quiet’ time in the life of the cell, called interphase. The events of mitosis itself were described as occurring in 4 phases occupyiing a short time as shown below 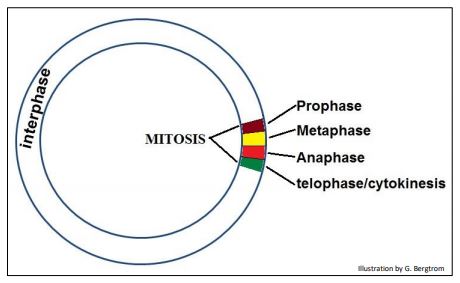 Depending on whom you ask, cytokinesis (the cell movements of actually dividing a cell in two) is not part of mitosis. In that sense, we can think of three stages in the life of a cell: interphase, mitosis and cytokinesis. Of course, it turned out that interphase is not cellular ‘quiet time’ at all!

A. Defining the Phases of the Cell Cycle

Correlation of the inheritance of specific traits with that of chromosomes was demonstrated early in the early 20th century, most elegantly in genetic studies of the fruit fly, Drosophila melanogaster. At that time, chromosomes were assumed to contain the genetic material and that both were duplicated during mitosis. The first clue that this was not so came only after the discovery that DNA was in fact the chemical stuff of genes. The experiment distinguishing the time of chromosome formation from the time of DNA duplication is summarized below.

If DNA replicates in chromosomes undergoing mitosis, then when the developed film is placed back over the slide, any dark spots should lie over the cells in mitosis, and not over cells that are not actively dividing. The experimental is illustrated below 340 Experiments that Reveal Replication in Interphase of the Cell Cycle

Next a series of pulse-chase experiments were done to determine when in the cell cycle DNA synthesis actually takes place. Cultured cells given a short pulse (exposure) to 3H-thymine and then allowed to grow in non-radioactive medium for different times (the chase). At the end of each chase time, cells were spread on a glass slide and again prepared for autoradiography. Analysis of the autoradiographs identified distinct periods of activity within interphase: Gap1 (G1), a time of DNA synthesis (S) and Gap 2 (G2). Here are the details of these very creative experiments, performed before it became possible to synchronize cells in culture so that they would all be growing and dividing at the same time. The plot defines the duration of events, or phases of the cell cycle as follows:

So at last, here is our cell cycle with a summary of events occurring in each phase. During all of interphase (G1, S and G2) , the cell grows in size, preparing for the next cell division. Growth in G1 includes the synthesis of enzymes and other proteins that will be needed for replication.

DNA is replicated during the S phase, along with the synthesis of new histone and other proteins that will be needed to assemble new chromatin. G2 is the shortest time of interphase and is largely devoted to preparing the cell for the next round of mitosis and cytokinesis. Among the proteins whose synthesis increases in this time are the tubulins and proteins responsible for condensing chromatin into the paired chromatids representing the duplicated chromosomes. Cohesin is a more recently discovered protein made in the run-up to mitosis. It holds centromeres of chromatids together until they are ready to separate.

341 Events in the Phases of the Cell Cycle

In a final note, typical dividing cells have generation times ranging from 16 to 24 hours. Atypical cells, like newly fertilized eggs, might divide every hour or so! In these cells, events that normally take many hours must be completed in just fractions of an hour.

B. When Cells Stop Dividing

Terminally differentiated cells are those that spend the rest of their lives performing a specific function. These cells no longer cycle. Instead, shortly after entering G1 they are diverted into a phase called G0, as shown below.