Pests are organisms that occur where they are not wanted or that cause damage to crops or humans or other animals (figure \(\PageIndex{a}\)). Thus, the term “pest” is a highly subjective term. A pesticide is a term for any substance intended for preventing, destroying, repelling, or mitigating any pest. Though often misunderstood to refer only to insecticides, the term pesticide also applies to herbicides (weed killers), fungicides, and various other substances used to control pests. Chemical pesticides can be effective, fast acting, adaptable to all crops and situations. When first applied, pesticides can result in impressive production gains of crops. However, despite these initial gains, excessive use of pesticides can be ecologically unsound (see Disadvantages of Industrial Agriculture). By their very nature, most pesticides create some risk of harm—pesticides can cause harm to humans, animals, and/or the environment because they are designed to kill or otherwise adversely affect living things. At the same time, pesticides are useful to society because they can kill potential disease-causing organisms and control insects, weeds, worms, and fungi. Figure \(\PageIndex{a}\): The cotton boll weevil is considered a major pest because of the damage it does to cotton plants. Image by ARS USDA (public domain).

Industrial agriculture employs monoculture farming, which involves growing only one species of crop in a large area (figure \(\PageIndex{b}\)). The plants in a monoculture are evenly spaced and have the same planting, irrigation, fertilizer, harvesting, etc. requirements, and this uniformity results in efficient use of farming machinery. Often, the crop is a high yield variety (high yielding variety; HYV), which is produced through selectively breeding individual plants with desirable characteristics. Compared to traditional crops, HYVs can produce more per unit area of land. Monoculture farming compromises genetic and species diversity in agriculture, however, promoting the spread of pests and risking that all the plants for hundreds of acres could be susceptible to the same disease (see Genetic Diversity). Figure \(\PageIndex{b}\): Monocultures like this potato farm (left) and cotton farm (right) make it easier to use farming equipment; however, this reduces genetic diversity and consumes fossil fuels. Left image by NightThree (CC-BY) and right image by Kimberly Vardeman (CC-BY) . Figure \(\PageIndex{c}\): Corn yields in metric tons (tonnes; 1000 kilograms) per hectare over time. While yields have fluctuated from year to year, they have overall increased since the 1940s. This improving agricultural efficiency is partly due to industrial agricultural practices. (Image by Hannah Ritchie and Max Roser/Our World in Data (CC-BY). Figure \(\PageIndex{d}\): The arable (farmable) land required to produce a fixed amount of a crop has decreased over time due to improved agricultural efficiency. Image by Hannah Ritchie and Max Roser/Our World in Data (CC-BY) Figure \(\PageIndex{e}\): Many of us carefully inspect produce at the grocery store and select those without blemishes. This visually appealing produce results from synthetic pesticides use. Image by Amanda Mills (public domain).

Industrial agriculture expands where crops can be cultivated. Applying synthetic fertilizers to poor soils can make them fertile. Additionally, irrigation systems promote high agricultural productivity in regions and during seasons that would otherwise only support the most drought-tolerant species. For example, about 25% of the food consumed in the United States is produced in California's Central Valley, which receives little rain in the summer months (figure \(\PageIndex{f}\)). Economically, the U.S. agricultural sector includes a history of increasingly large federal expenditures. Also observed is a widening disparity among the income of farmers and the escalating concentration of agribusiness—industries involved with manufacture, processing, and distribution of farm products—into fewer and fewer hands. Market competition is limited and farmers have little control over prices of their goods, and they continue to receive a smaller and smaller portion of consumer dollars spent on agricultural products.

Economic pressures have led to a tremendous loss to the number of farms, particularly small farms, and farmers during the past few decades. More than 155,000 farms were lost from 1987 to 1997. Economically, it is very difficult for potential farmers to enter the business today because of the high cost of doing business. Farming equipment is expensive, and the industrial agricultural system favors large corporate farms, which can more easily invest in this equipment. While this equipment promotes efficiency, it also reduces the number of jobs in agriculture (figure \(\PageIndex{g}\)). The mechanical farming equipment required for industrial agriculture relies on fossil fuels. Burning fossil fuels releases air pollution, including greenhouse gases, which cause climate change. Additionally, the synthetic fertilizers and pesticides used in industrial agriculture are produced from fossil fuels. Furthermore, agriculture areas rarely contain as much biomass (organic matter that comprises living things) as biodiverse, intact ecosystems. Biomass is an important carbon sink because its organic molecules store carbon that could otherwise be in the atmosphere as carbon dioxide or methane, both greenhouse gases. Soils with a substantial organic component are also carbon sinks. Industrial agricultural practices that deplete these soils (see below) contribute to climate change, but alternative practices can promote this benefit of healthy soils (see Sustainable Agriculture).

While synthetic fertilizers provide crops with the necessary nutrients for high productivity, excess nutrients from fertilizers can enter bodies of water through runoff. This can lead to a bloom of algae or photosynthetic bacteria in lakes, rivers, and bays in a process called eutrophication. These photosynthetic microorganisms sometimes produce toxins that kill aquatic animals and can even harm the humans who consume these animals. Furthermore, they block aquatic plants from accessing light. Eventual decomposition of algal blooms requires oxygen, which results in hypoxia (low levels of dissolved oxygen), further harming aquatic species. Additionally, industrial agriculture pollutes water with pesticides and sediments. Pesticides are not only widespread in surface waters, but pesticides from every chemical class have been detected in groundwater.

Industrial agricultural practices often deplete soil quality. For example, wind and water erosion of exposed topsoil removes particles and nutrients from the soil (which also contributes to eutrophication and sediment pollution). Tilling (mixing the soil) and overgrazing of livestock exacerbates erosion. When livestock remove too much vegetation from an area, plant roots no longer anchor the soil in place, and erosion ensues. Farming equipment compacts the soil. This limits infiltration of water into the soil (decreases soil permeability), makes it more difficult for roots to penetrate the soil, and hinders gas exchange in roots. In extreme cases, soil has eroded and lost its ability to retain water that once arable (farmable) land becomes a desert-like (desertification; see Soil Degradation; figure \(\PageIndex{h}\)). 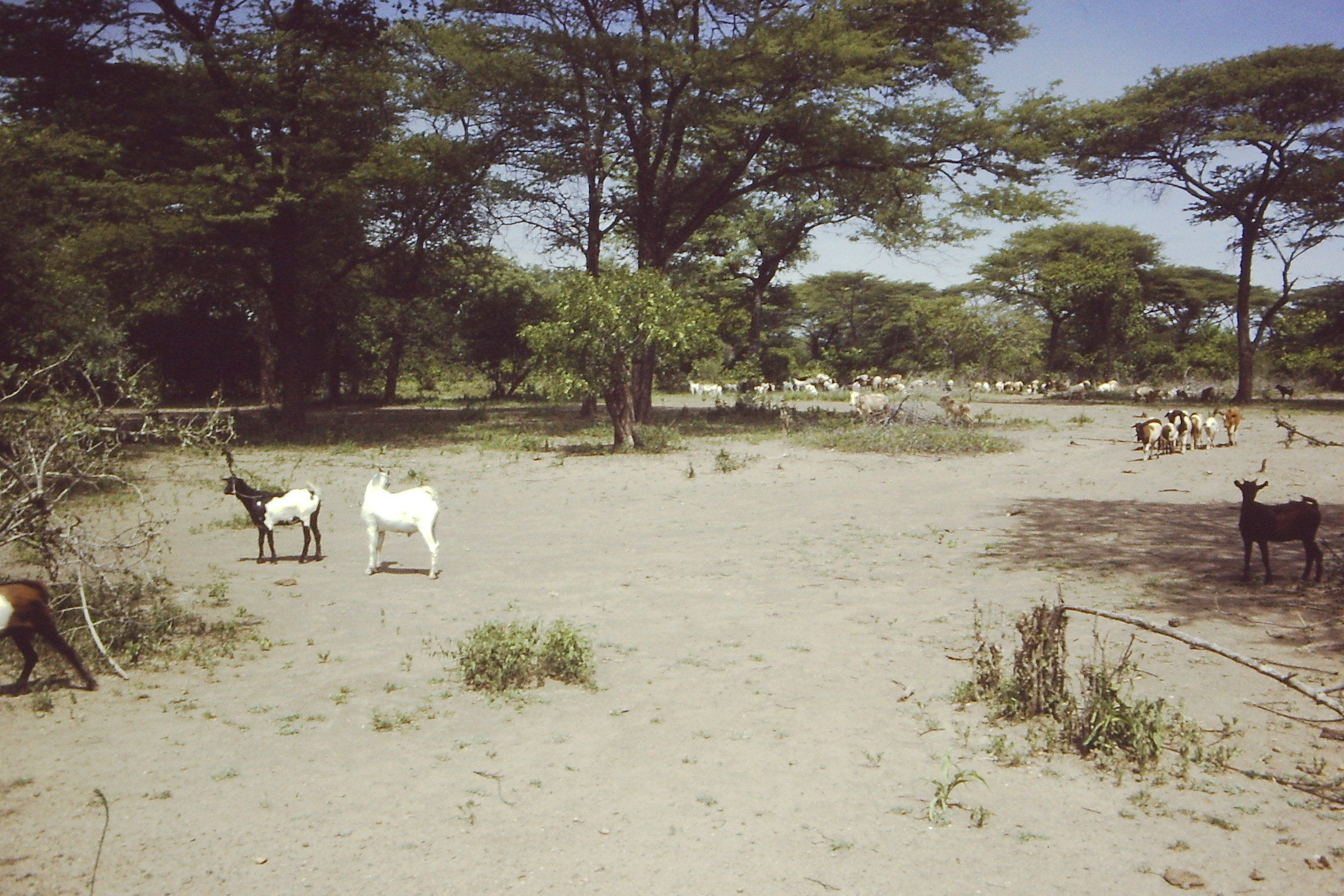 Irrigation can lead to salinization (increased salinity). While the water itself eventually evaporates, is transpired, or drains from the soil, the minerals dissolved in the water may remain in the soil. Over time, these minerals can accumulate to levels that are toxic for most plants. As discussed in Water Usage, irrigation for agriculture accounts for 69% of global water usage. Withdrawal of sufficient water for irrigation contributes to water shortages and diverts water from ecosystems (see Aqueducts).

Repeated pesticide application exerts selective pressure on insects, fungi, and other crop pests to evolve pesticide resistance. By chance, some individuals in a pest population may carry gene versions that confer pesticide resistance. When these populations are exposed to pesticides, individuals with these gene versions are the most likely to survive and reproduce. They then pass these genes to their offspring, and pesticide resistance becomes more and more common in the population over time (figure \(\PageIndex{i}\)). At this point, pesticides may need to be applied at greater concentrations or more frequently to achieve the same effect. If pesticide that was initially used is no longer effective at all, the farmer would be forced to find a different pesticide. Over 400 insects and mite pests and more than 70 fungal pathogens have become resistant to one or more pesticides. Figure \(\PageIndex{i}\): Pesticide application can exert selection for the evolution of pesticide resistance. In this hypothetical example, the purple beetle has a gene version that makes it resistant to pesticides (upper left). Pesticides are applied, killing most of the susceptible individuals (white beetles; upper right). In a later generation, purple, resistant beetles are more common because they had a better chance of surviving and reproducing (lower left). Upon another pesticide application, an even greater proportion of the population is resistant. Image modified from Delldot (CC-BY-SA).

Pesticides have also placed stresses on pollinators and other beneficial insect species. They can lead to the destruction of natural enemies, which would regulate pest populations in an intact ecosystem. For example, once apple growers began controlling pests with the pesticide dichlorodiphenyltrichloroethane (DDT), which has since been banned, they quickly found their orchards being attacked by scale insects and mites. The reason: DDT had killed off their natural enemies. More generally, pollution from industrial agriculture along with habitat loss due to converting healthy ecosystems into agricultural fields is a major threat to biodiversity. As mentioned previously, monoculture farming limits biodiversity in crops.

With respect to animal agriculture, keeping livestock are kept in close quarters increases the risk of disease spread among them. For these reason, food animals are commonly given antibiotics, either preventatively or to treat existing infections. As discussed in the Infectious Diseases section, the overuse of antibiotics (whether in humans or farm animals) increases selection for the evolution of antibiotic-resistant strains of bacteria or other disease-causing organisms. Infections by antibiotic-resistant strains are more difficult to treat.

As with many industrial practices, potential health hazards are often tied to farming practices. Under research and investigation currently is the sub-therapeutic use of antibiotics in animal production, and pesticide and nitrate contamination of water and food. Farm worker health is also a consideration in all farming practices.