One of the most important environmental goals is to provide clean water to all people. Fortunately, water is a renewable resource and is difficult to destroy. Evaporation and precipitation combine to replenish our fresh water supply constantly; however, water availability is complicated by its uneven distribution over the Earth.

The water crisis refers to a global situation where people in many areas lack access to sufficient water, clean water, or both. Arid climate and densely populated areas have combined in many parts of the world to create water shortages, which are projected to worsen in the coming years due to population growth, water overuse, water pollution, and climate change. Specifically, climate change shifts precipitation patterns and causes the snow pack that recharges rivers to melt earlier in the year. Furthermore, rising sea levels associated with climate change worsen saltwater intrusion.

Water scarcity refers to water shortages, which can be physical or economic (figure \(\PageIndex{a}\)). Physical water scarcity is the lack of sufficient water resources in an area; that is, water is depleted more quickly than it is replenished. Unpredictable precipitation patterns associated with climate change, which increase the risk of flooding and drought, exacerbates physical water scarcity. Economic water scarcity occurs when people cannot afford access to water. The United Nations estimates that over half of the global population faces water scarcity for one or more months of the year (see The Sustainable Development Goals Report 2019). According to the World Health Organization and UNICEF, 785 million people lack access to even a basic drinking water service (see Drinking Water) and two billion people lack access to improved sanitation as simple as a pit latrine (see Sanitation), and three billion people lack a facility to wash their hands (see Hand Hygiene for All). As a result, nearly 829,000 people die every year from diarrheal diseases, and 297,000 of those deaths occur among children under the age of five (see Drinking Water). Reservoirs (artificial lakes) that form behind dams in rivers can collect water during wet times and store it for use during dry spells (figure \(\PageIndex{b}\)). They also can be used for urban water supplies. Other benefits of dams and reservoirs are hydroelectricity, flood control, and recreation. Some of the drawbacks are evaporative loss of water in arid climates and downstream river channel erosion. Additionally, dams reduce water flow downstream, which could lead to political conflicts when rivers span states or countries.

The negative ecosystem impacts of dams are another major drawback. For example, dams change a river to a lake habitat and interfere with migration and spawning of fish. Furthermore, warming of the surface water in the reservior influences the temperature of the water downstream, impacting the fish and aquatic invertebrates that are adapted to colder water. Dams also trap sediments that would otherwise continue to flow down the river, creating habitat and supplying nutrietns downstream. Figure \(\PageIndex{b}\): The Hoover Dam on the Colorado River in Nevada. Behind the dam is Lake Mead, the largest reservoir in the United States. Image by Dsimic (CC-BY-SA). Figure \(\PageIndex{c}\): The components of a rainwater harvesting system include (1) the collection system consisting of the roof surface and gutters that capture rain water and send it to (2) the inlet filter, a screen that catches large debris. (3) The first flush diverter removes debris not captured by the inlet filter from the initial stream of rainwater. (4) The storage tank is composed of food-grade polyester resin material approved by the U.S. Food and Drug Administration (FDA), which is green in color and helps to reduce bacterial growth. (5) The overflow is a drainage spout that releases excess water if the storage tank is full. The (6) control system monitors the water level and filtration system, and the (7) treatment system is responsible for filtration and disinfection, treating water until it is potable (safe to drink). The (8) pump moves water through the system to where it will be used, and the (9) backflow preventer ensures that water cannot flow backwards through the system in cases of low water pressure (when the storage tank is low). (10) The flow meter (with data logger) measure water production. The (11) power supply may rely on conventional energy sources or solar energy, and the (12) water level indicator monitors the water level in the storage tank. Caption modified from and image from Office of Energy Efficiency and Renewable Energy, Department of Energy (public domain). 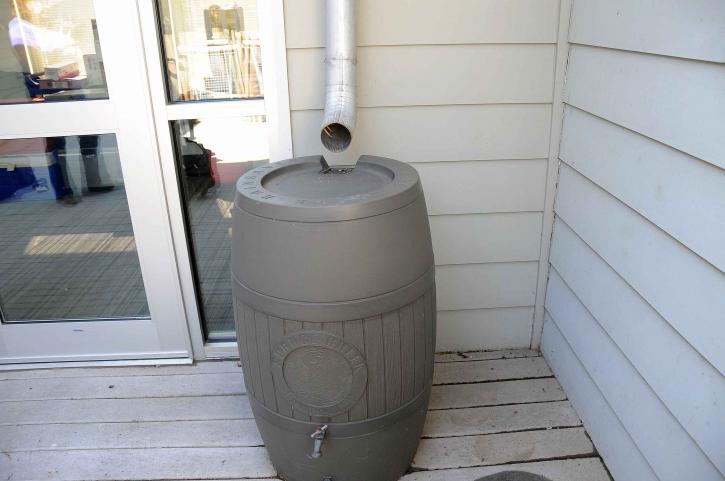 Aqueducts can move water from where it is plentiful to where it is needed. Aqueducts can be controversial and politically difficult especially if the water transfer distances are large. One drawback is the water diversion can cause drought in the area from where the water is drawn. For example, Owens Lake and Mono Lake in central California began to disappear after their river flow was diverted to the Los Angeles aqueduct (figure \(\PageIndex{e}\)). Without water supply, Owens Lake dried and became a major source of particulate matter, polluting the air during dust storms (see Air Pollution). Owens Lake remains almost completely dry, but Mono Lake has recovered more significantly due to legal intervention. Learn more about the Los Angeles Aqueduct here. 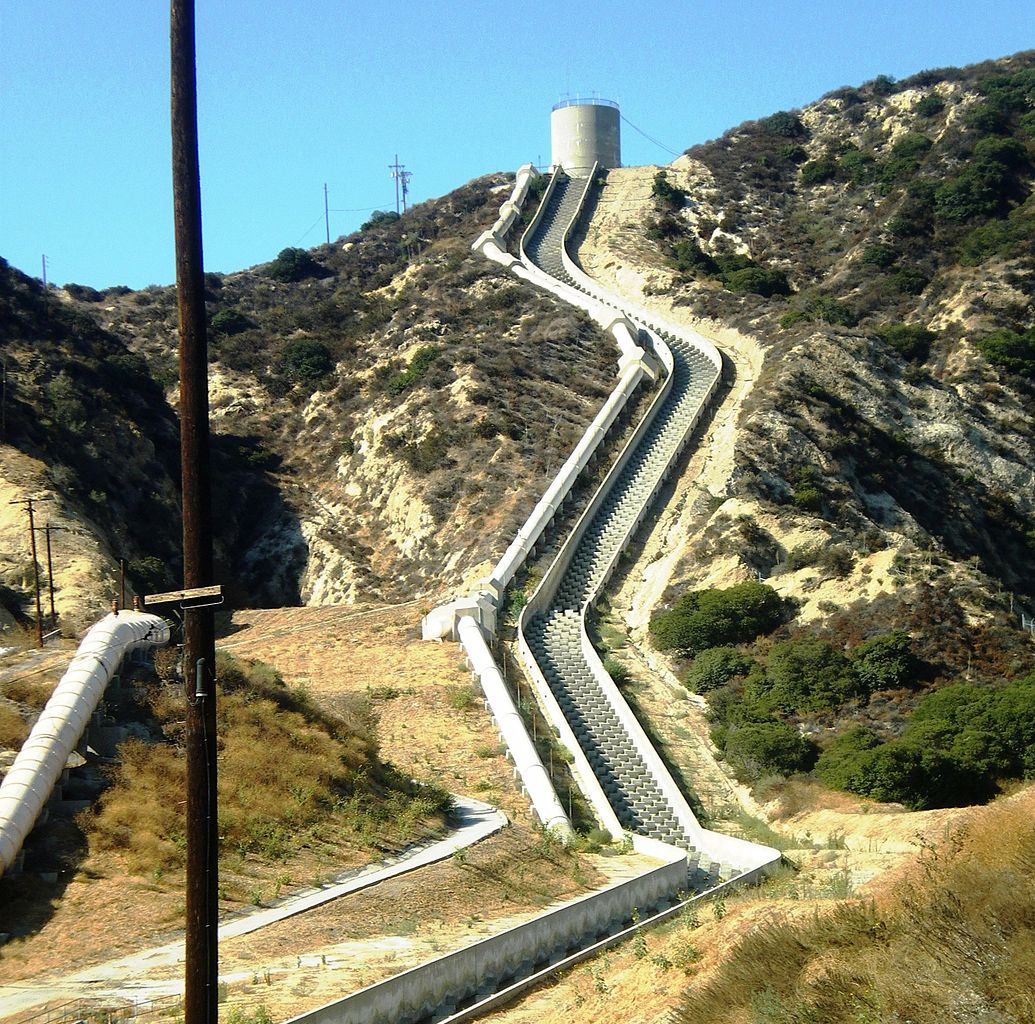 One method that can actually increase the amount of freshwater on Earth is desalination, which involves removing dissolved salt and minerals from seawater or saline groundwater (figure \(\PageIndex{f}\)). An advantage of this approach is that there is a virtually unlimited supply of saltwater. There are several ways to desalinate seawater including boiling, filtration, electrodialysis (applying an electric current to removed the ions which comprise salts), and reverse osmosis (figure \(\PageIndex{g}\)). All of these procedures are moderately to very expensive and require considerable energy input, making the water produced much more expensive than freshwater from conventional sources. In addition, the process creates highly saline wastewater, which must be disposed of and creates significant environmental impact. Desalination is most common in the Middle East, where energy from oil is abundant but water is scarce. Figure \(\PageIndex{g}\): Reverse osmosis is one method of desalination. In this process, pressure (A) is applied to salt water, which contains ions (charged atoms or molecules) and other contaminants (C). The water is forced through a semipermeable membrane (D), through which the contaminants cannot pass. Clean freshwater that is safe to drink (E) is then distributed (F). Image by Colby Fisher (CC-BY-SA).

Water recycling refers to reusing water for appropriate purposes such as agriculture, municipal water supply, industrial processes, and environmental restoration (figure \(\PageIndex{h}\)). This could occur at the scale of a single household, for example, installing plumbing that reroutes water drained from the sink to flush the toilet. Water recycling can also occur at large scales. For example, wastewater from the sewage system is regularly treated to an extent, but it can be treated further to produce potable water (which is safe to drink) and then pumped into depleted aquifers. This approach limits saltwater intrusion of aquifers near the coast and reduces dependence on precipitation and subsequent infiltration to recharge aquifers. Orange County Water District in California employed this system following an information campaign to explain the purification process and ensure public confidence in the safety of the treated wastewater. Water conservation refers to using less water and using it more efficiently. Around the home, conservation can involve both water-saving technologies and behavioral decisions. Examples of water-saving technologies include high-efficiency clothes washers and low-flow showers and toilets. Water-conserving behaviors include turning off the water while you brush your teeth, taking shorter showers and showers instead of baths, and fixing leaky faucets. A dishwasher uses less water than washing dishes by hand, particularly the dishwasher is only run when it is full. Similarly, running fewer, larger loads of laundry conserves water relative to more frequent, smaller loads. Choosing foods with a low water footprint (like eggs) over those with a high water footprint (like beef) can also conserve water.

Gardening offers several water-saving opportunities. If you live in a dry climate, consider growing only native, drought-tolerant vegetation, which requires little irrigation (figure \(\PageIndex{h}\)). When you do irrigate your garden, do so only as needed and early in the morning, when less water will be lost to evaporation. Drip systems assist in delivering only the needed amount of water in a way that minimizes evaporation. These strategies can also be applied at large scales in agriculture, which is extremely important considering the high agricultural demands on our water supply relative to municipal use. Water conservation strategies in agriculture include growing crops in areas where the natural rainfall can support them, more efficient irrigation systems such as drip systems, and no-till farming, which reduces evaporative losses by covering the soil. Bottled water is not a sustainable solution to the water crisis. Bottled water is not necessarily any safer than the U.S. public water supply, it costs on average about 700 times more than U.S. tap water, and every year it uses approximately 200 billion plastic and glass bottles that have a relatively low rate of recycling. Compared to tap water, it uses much more energy, mainly in bottle manufacturing and long-distance transportation. (Purchasing a water filter is a more sustainable solution than bottled water if you do not like the taste of tap water.)