Often objects appear colored because of their absorption of light within selective regions of the visible spectrum. The light from such objects that strikes our eyes (whose color we perceive) is composed of those wavelengths that the object DID NOT absorb.

Even though the sample is "greener" with higher concentrations of chlorophyll, this is not due to an increase in the intensity of the green wavelength of light; it is due to a reduction in the violet/blue and orange/red wavelengths of light. It is this reduction that we can use to quantitate the concentration of chlorophyll. Although the sample appears green we cannot quantitate it by monitoring the green wavelength of light.

Light is strange stuff, it is a radiative form of energy transfer, and in order to understand its properties we have to consider it to have both wave and particle properties. The different wavelengths of light differ in the energy they carry; the energy is directly proportional to the frequency of the light (the higher the frequency, the higher the energy):

The energy unit is the erg (1Joule = 107ergs) and the frequency unit is Hertz (i.e. cycles per second, or just units of sec-1). The constant of proportionality is Planck's constant, h, with a value and units of 6.6 x 10-27 erg sec

The frequency (n) of light is inversely proportional to the wavelength (l):

Frequency has units of sec-1 and wavelength has units of meters. The constant of proportionality is c (the speed of light) with a value and units of 3 x 108m/sec:

This relationship is true in a vacuum; however, "optically dense" materials can slow the speed of light requiring the following correction to the above equation:

Therefore, the energy of light is inversely proportional to the wavelength:

The "photon" is a corpuscular (particle) description of light that is the carrier of the "quanta" of energy defined in the above equation. When light is absorbed by a molecule it transfers its quanta of energy, and the photon ceases to exist. Where did the energy go? 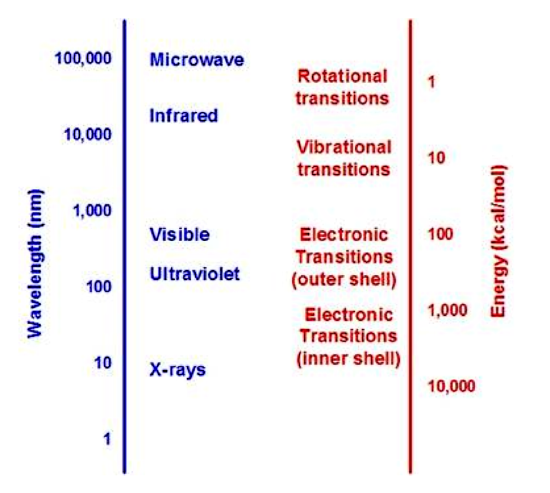 The atomic bonds, chemical and electronic structure of molecules are unique properties and differ from one type of molecule to another.

In the example of chlorophyll given above the intensity of light passing through the sample is termed the "light transmittance" of the sample:

It is important to note the distinction between transmittance and absorption: they are inversely proportional

How are transmittance (T) and absorption (A) quantified? How is the transmittance affected by the sample concentration and physical size (i.e. path length)?

Thus, we expect the equation relating T to c and l to take the general form of:

Transmittance turns out to decrease exponentially with increases in the concentration and path length, thus the equation has the form:

The constant of proportionality is the extinction coefficient e:

Since log values are dimensionless, the units of e would appear to be inverse concentration and inverse distance (e.g. M-1cm-1)

Values for ε and l

· In this case a 10mg/ml solution of the molecule will have an absorbance reading of 14.5 (dimensionless units) at l = 280nm (the absorption at other wavelengths may not be known). The units of concentration are g/L, thus e will have dimensions of g-1 L cm-1.

The relationship between changes in A, T and c

· The inverse log relationship between transmittance and absorbance can be stated as:

Spectrophotometers are precision instruments, however, conceptually they involve a relatively few number of parts. A simple design would look something like this: A modification of this design, a "dual beam" spectrophotometer, can permit simultaneous measurement of I and I0: 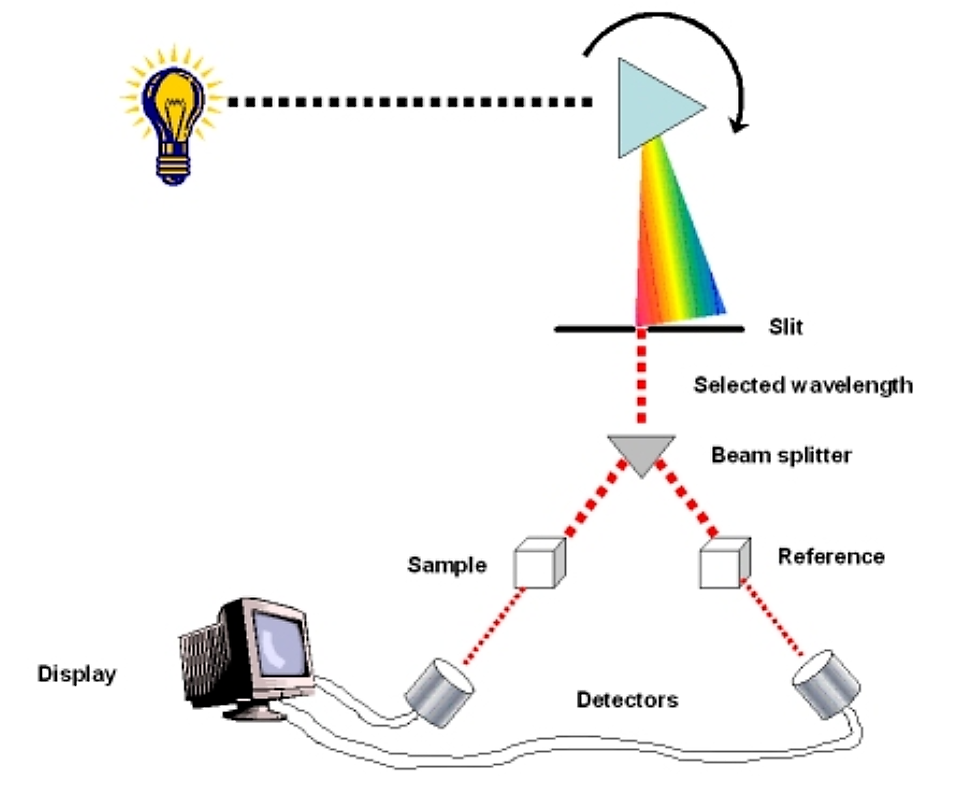 Both the single and dual beam detectors allow the investigator to monitor the absorbance properties for a single wavelength of light (the wavelength selected by the prism/slit settings. A modification that incorporates an array of detectors can permit simultaneous measurement of a spectrum of wavelengths: Figure 5.1.8: Simultaneous measurement of a spectrum

Proteins do not absorb in the visible wavelength unless they have a prosthetic group (e.g. Fe2+) or an unnatural amino acid. However, the amino acids tryptophan, tyrosine and cysteine absorb light in the UV wavelength: The aromatic rings in the bases of nucleic acids also absorb in the UV range: Note that samples of nucleic acids and proteins can both absorb at 280nm, therefore, samples of biological molecules should be pure in order to quantitate using UV absorption spectroscopy.