Comparison of the Folded and Denatured Forms of Proteins

Protein unfolding involves the conversion of the highly ordered native state (N), or folded (F), state to a unfolded (U), or denatured (D) state. During the unfolding process the primary structure (e.g. covalent bonds) of the protein does not change. The folded state usually has a single, well defined, and unique tertiary structure with a significant fraction of amino acids buried in the core of the protein, sequestered from the solvent. In the completely unfolded state, all amino acid sidechains will be exposed to the solvent. The denatured form of the protein is seldom biologically active while the folded or native state is usually the biologically active form of the protein.

The major differences between these two states is listed below:

Features of the Folded State of Globular Proteins Answer the following questions based on the Jmol protein structure shown on the left. Use these buttons to:

view both mainchain and sidechain atoms c. both helical and sheet residues

highlight the helix in red and the sheet in green 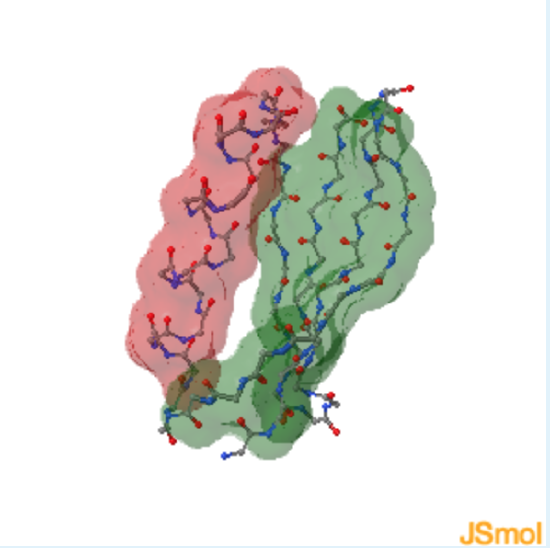 Use these checkboxes to inspect the aspects of this structure in order to answer the questions below: Use these checkboxes to inspect the aspects of this structure in order to answer the questions below:

Based on the protein G Jmol , which of the following is the best description for the distribution of residues in a folded globular protein?

c. both exterior and interior

It is helpful to watch the molecule rotate to get a better sense of interior versus exterior.

Thermodynamic Factors that affect the Stability of the Native State

between the two states is positive, indicated that the native state (N) is more stable (lower in Gibbs energy) than the unfolded (U) state. \(\Delta G\)o is the change in the energy of the system when one mole of reactant(s) are converted to one mole of product(s). The standard energy change can be related to the equilibrium position of the reaction:

A positive value for \(\Delta G\) will give an equilibrium constant that is less than one (\(e^{-x}\) < 1), another indication that the concentration of reactants (N-state) is higher than the product (U-state).

Both the enthalpy and entropy contribute to the overall Gibbs energy of the system as follows:

where \(\Delta H^{\circ}\) and \(\Delta S^{\circ}\) are the standard changes in enthalpy and entropy, respectively. The contribution of each of these terms to the stability of the folded state is discussed in the following sections.

Enthalpy (\(\Delta H\)) is the amount of heat generated/consumed by the reaction when 1 mole of reactants are converted to one mole of products.

The enthalpy is related to changes in molecular interactions (i.e. hydrogen bonds, van der Waals, etc.). In biochemistry, these interactions usually involve non-covalent changes. A positive enthalpy is unfavorable since it implies that bonds have been broken, (e.g. hydrogen bonds), because heat has been added to the system. Reactions that release heat (decrease in \(\Delta H\)o) are favorable, from an enthalphic point of view. The \(\Delta H^{\circ}\) associated with van der Waals forces is unfavorable for unfolding. Van der Waals interactions are more stable in the native form of the protein because of the optimal surface contact between residues in the folded form. Electrostatic forces: Although these forces can contribute to Δ Ho changes in many biochemical interactions, they are usually not important for protein folding because the charged residues remain on the surface and therefore interact with water equally well in both the native and the denatured state. The energetic cost of burying a single charge in the core of a protein is extremely high, largely due to desolvation of the ion during the folding process. Note that in some proteins charge-pairs are buried. These are stable because the loss of energy due to desolvation is regained by favorable electrostatic interactions in a low dielectric media.

\(\Delta S^{\circ}\) is the change in entropy when 1 mole of reactant(s) are converted to one mole of product(s).

A positive entropy change is favorable since the disorder in the system is increased. A positive change in entropy leads to a decrease in \(\Delta G\)o since

The entropy is related to the change in the number of possible configurations (\(W\)) of the system when the reaction occurs. The entropy can be calculated from Boltzmann’s equation:

Conformational entropy of proteins: When a protein unfolds the entropy of the molecule increases dramatically due to a change in the conformational freedom of the phi and psi angles of the mainchain, as well as disordering of the sidechain. The change in the number of conformations that a residue can obtain in the unfolded state can be estimated as follows:

The contribution of the enormous number of conformations to the stability of the unfolded state is enormous. For a 50 residue protein:

Hydrophobic effect - Entropy Changes of the Solvent: The hydrophobic effect is due to the entropy of the water in the system. When a non-polar side chain is exposed to water it orders, or decreases the entropy, of the water molecules. However, when the non-polar residue become buried in the non-polar center of the protein it releases all of the water which coated it. The released water can now freely diffuse in the solvent, resulting in an increase in entropy of the water. This effect is the principle reason why the cores of globular proteins are non-polar; considerable energy is released when the ordered water becomes disordered as the non-polar residues become buried in the core of the protein.

The left side of the figure shows a section of solvent, divided into four quadrants, and a folded protein with a buried Phe sidechain. Six possible distributions of the two solvent water molecules are possible when the protein is folded, i.e. \(W_{solvent}\)=6. In the unfolded state (right) the sidechain atoms of the solvated Phe residue order the two water molecules, i.e. \(W_{solvent}\)=1. During the unfolding event (left to right), the solvent becomes more ordered, which is unfavorable.

The order of hydrophobic residues can have a large effect on the final structure of a protein. The left part of the diagram shows a 12 residue protein that contains five non-polar amino acids (black balls). It can fold into a large number of structures. Two possible ones are shown on the right, a jelly roll structure (A), or an "S" shaped structure (B). Based on your knowledge of the hydrophobic effect, which of these will be more stable?

The structure that buries more hydrophobic residues will be more stable.

Hydrophobicity of Amino Acid Residues: The hydrophobicity, or entropy change when a non-polar group is buried in a non-polar environment (e.g, during protein folding) depends on the non-polar surface area, as illustrated in the figure below. Overall Energy Balance in Protein Folding. Protein stability is determined by the overall balance of forces that stabilize the native state and forces that destabilize it. The formation of hydrogen bonds and van der Waals interactions are favorable for folding. The hydrophobic effect also stabilizes the native state due to the non-polar nature of the core. The large conformational entropy stabilizes the denatured state. The role of each of these effects on the energy of a 50 residue protein are:

This table shows the contribution of entropy and enthalpy to the overall stability of a 50 residue protein. Entropy changes have been converted to free energy changes using \(\Delta G=-T\Delta S\). Positive values indicate that the native state is stabilized, i.e. energy is required to unfold the protein.

There are two important features to note:

Enthalpic (red) contributions from H-bonds and van der Waals interactions, as well as entropy gains (blue) from the hydrophobic effect stabilize the native state. The increase in conformational entropy (blue) during unfolding stabilizes the unfolded state.

The following features of a folded globular protein are a consequence of the thermodynamics forces that stabilize the folded form of the protein, listed in order of significance, from left to right. Conformational entropy has been left off of this chart, remember it is very destabilizing for the folded state.

Use the Jmol protein structure to answer the following questions Alpha-helices and beta-sheets are equally stable from the perspective of the mainchain atoms, why is one favored over another?

How does the sidechain orientation differ for the two structures?

The periodicity of buried non-polar residues in the sequence will determine the secondary structure. An alpha-helix will form if every 3.4 residues are non-polar, as this structure will place all non-polars on the same face of the helix. a. little increase in the entropy of protein.

b. large decrease in the entropy of the protein.

c. no change in the entropy of the protein.

d. large increase in the entropy of the protein.

e. little decrease in the entropy of the protein.

Does the protein chain become more disordered when the protein unfolds? What is the relationship between disorder and entropy?

d. (The number of possible conformations of each residue in the unfolded form is considerably higher than in the folded form, leading to large changes in entropy.)

2. Which of the following 'forces' is the most favorable for protein folding?

Which force seems to tip the balance towards the folded state?

b. (The release of water that occurs when non-polar residues are buried in the protein causes a large favorable (positive) change in entropy.)

3. wo proteins (A,B) that have the same composition (four non-polar residues) but different sequences fold into an arrangement of 4x3 atoms (right diagram).

A: Pick the structure that buries more hydrophobic residues.

B: Since the sequences are different, the structures are likely different.