The dipole moment, \(\mu\), is defined by the following equation:

where \(q\) is the charge on the atom and r is the distance to the center of mass.

The ammonia molecule (NH3) has three identical polar N-H bonds that are equally spaced around the nitrogen atom. Ammonia has a net dipole moment of 1.4 D, similar to that of water (1.85 D).

Based on this information, do you think ammonia is a planer molecule or not? Briefly justify your response.

What orientations of the individual dipole would give rise to a net dipole of zero?

Answer
Ammonia is not planer. If it were planer than the dipole moments associated with each N-H bond would cancel, giving a net dipole of zero.

Drag the model with your mouse to rotate it in 3D space. Use your right mouse button or "control" click on the Jmol to bring up a menu of options for manipulating the model. 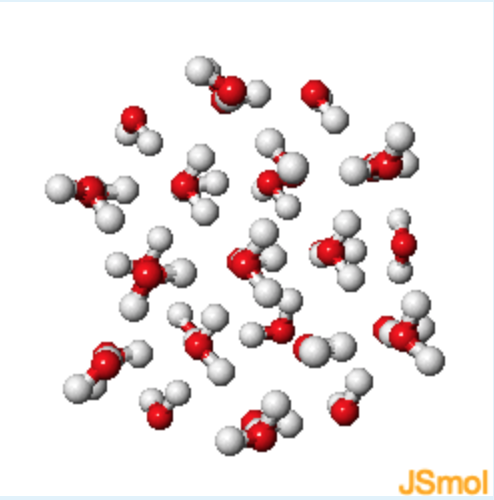 1. Identify the following atoms based on the colors from the figures above

focus on a single water molecule.

2. Which set of atoms on different molecules will have a greater distance between them? Hydrogen to Hydrogen or Hydrogen to Oxygen? 3. Describe the relative orientation of the hydrogen atoms (white) with respect to the oxygen atoms (red). How does this orientation differ between water and ice?

What is the physical basis for this orientation?

It may be helpful to rotate the molecules to see the relative positions of the atoms.

4. Compare liquid water and ice, which seems to have the lower density, and why?

view the physical property of ice that causes this phenomena. a. H-bonds are stable because of electron sharing across the bond (i.e. a weak covalent bond) and an electrostatic attraction between:

e. Number of hydrogen bonds depend on temperature, 4/molecule at 0\(^{\circ}C\). 1. Which of the following sets of atoms will not form a strong hydrogen bond?

The donor hydrogen should be attached to a strongly electronegative atom.

a. (the donor hydrogen is not attached to an electronegative atom.)

2. Which of the following hydrogen bonds would be the strongest (lowest in energy)?

The optimal distance between donor and acceptor depend on the balance between van der Waals forces and electrostatic forces.

b. (this is very close to the optimal distance for the electrostatic interaction in hydrogen bonds.)

3. Which of the following hydrogen bonds would be the weakest?

a. ( hydrogen bonds are also partially covalent and optimal overlap of the shared electrons occurs when they are linear.)

Ionic compounds are readily solvated by water. There are two factors that favor a dissolved solution of ions over the crystalline form.

Amphipathic (or amphiphilic) compounds are both polar (or charged) and nonpolar. An example is a fatty acid, which has a charged carboxylate (red) and a non-polar hydrocarbon chain (yellow). These can form micelles if the nonpolar part is sufficiently large. Micelles are aggregates of amphipathic molecules that sequester the nonpolar part on the inside, much like the inside of an orange. Micelles will form spontaneous driven by the hydrophobic effect.

DID I GET THIS

a. a covalent bond.

b. a hydration shell.

c. (The statement is a fairly complete definition of the hydrogen bond; Hydration shell refers to organization of water molecules around a non-polar group; "Hydrophobic Bond" is not a real term, don't confuse it with a "hydrogen bond"; Partial charges cannot be involved in ionic bonds, only full charges can form ionic bonds.)

2. A hydrogen bond that is linear is more stable than one that is bent.

True (A linear geometry is more stable due to the partial covalent nature of the hydrogen bond.)

Look carefully at the Jmol images and static picture of hydrogen bonds in ice and water.

4. Which of the following alcohols would be most soluble in water?

All of these compound have the same polar group (-OH). In what way do they differ?

a. (The alcohol with the least amount of non-polar character would be the most soluble.)

a. are responsible for the surface tension of water

b. are stronger than covalent bonds

c. can hold two ions together

Hydrophobic compounds do not contain polar atoms and therefore cannot interact with water via hydrogen bonding.