When I got to class today, Mrs. Hooke had a bunch of gross looking liver set out. I’ve never liked liver, so I was really hoping we weren’t going to have to eat it. Mrs. H explained that we were going to observe an enzyme in the liver. Since we always start labs off with questions, I quickly went back to my notes to refresh my memory about what an enzyme was. My notes had the definition as “a protein that speeds up a chemical reaction.”  I would be ready to answer if Mrs. Hooke called on me.

The bell rang and Mrs. Hooke addressed the class.  “Class, today we are going to learn about an enzyme found in liver. It’s called CATALASE.” She held up a chunk of liver with tweezers that was dripping with blood. While trays with materials were being passed out, Mrs. Hooke asked me to read the lab introduction out loud.

So how do cells deal with the build-up of hydrogen peroxide?  They actually have a protein that breaks it down into harmless components:  water and oxygen.

Enzymes are proteins that speed up the rate of reactions, and there is a particular enzyme that can help break down hydrogen peroxide.  The name of the enzyme is CATALASE. "

Mrs. Hooke then asked Polly to write the equation on the board so everyone could see it. She went to the board and wrote in big purple letters the equation for how the hydrogen peroxide is broken into water and oxygen.

Mrs. Hooke paused in passing out the trays “You will need to refer back to that equation as you complete the lab. On your desk, you have beakers with hydrogen peroxide, pipettes, and petri dishes. Before I give you the liver to start your experience, you will need to show me you completed the pre-lab questions.” 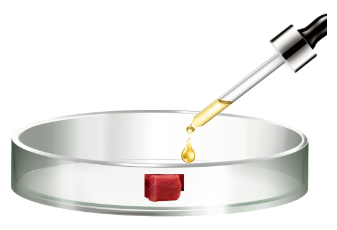 Mrs. H came by and checked my paper then dropped a few chunks of liver on my tray.  The paper towel soaked up some of the blood, but it didn’t bother me, even though it grossed out my lab partner.

The instructions said to put a chunk of liver on a dish and add 3 ml of hydrogen peroxide, then observe what happens. It took a few seconds and then I could see a bunch of little bubbles in the dish around the chunk of liver. Woah! I wondered what those bubbles were made of.

Next we tilted the petri dish and poured off the liquid into another dish. The instructions said to add more hydrogen peroxide but to hold the dish in your hand while you did that.  I asked my lab partner to do the pouring while I held the dish. It didn’t take long and I noticed that the dish was getting warm.  I asked around to see if anyone else noticed that. When Mrs. H overheard us talking, she asked if we remembered from chemistry what kind of reaction gives off heat.  Everyone was really stumped on that question, even me. Finally, Mrs. H just told us the answer. “It’s an EXOTHERMIC reaction.”

I then remembered a little bit from last year, endothermic reactions absorb heat. The reaction we were observing was definitely ectothermic because it felt warm. I also realized that no matter how much we hydrogen peroxide we put on the liver, it just kept bubbling. The enzyme in the liver was not getting used up in the reaction.

Our next step was to run some tests on the liquid that we poured out after the bubbling stopped.  We were supposed to find out if we added liver to that liquid if it would bubble. I looked at the equation again, if the peroxide was getting changed into water and oxygen when it bubbled, wouldn’t the liquid we poured off just be water? I mentioned that to my lab partner, but she didn’t agree, she thought we would get more bubbles. The only way to find out was to add more liver. I carefully placed a bit of liver in the water that bubbled up from the last test. It just sat there. No bubbles. I gave my lab partner the “I told you so” look.

The last section of the experiment asked us to observe the reaction if the liver had been heated up. I had to go to the front to get the warm liver which had been sitting under a heat lamp. The dish was warm, but not hot. This time when I added the hydrogen peroxide the bubbles went really fast. I was lucky we had a paper towel handy because some of the bubbles overflowed the dish and made a mess. Polly was afraid to touch the liquid that poured over the dish, but I told her it was just water and not to worry.