Ecological Succession of Bacteria in Milk

The communities within ecosystems develop over time, from very simple species assemblages, to complex, rich ecosystems. In this process, called succession, each succeeding species facilitates changes in environment which allow new species to come into the ecosystem. As the community becomes more and more complex, the biodiversity of the ecosystem also increases. Both biotic and abiotic processes can reset the succession process. That is, events cause by both the community itself, and outside events can return the community to an earlier succession state. The gradual changes in the community are both orderly and predictable in many ecosystems. The peak or most complex, advanced community that can develop in any abiotic environment is called the climax community. The picture below describes the developing communities as a series of steps, each of which can be driven against the succession process by disturbances:

One example of a severe disturbance, reducing the land to bare ground, is the passage of a glacier. Though glaciers have not covered this part of North America for ten thousand years, there are parts of the continent that are even now becoming uncovered by receding glaciers. One area is the pacific northwest. From Juneau to Glacier Bay, many glaciers which have previously fallen directly into the ocean are now leaving bare soil which has not been exposed for more than fifty thousand years. Because the glaciers retreat very slowly, we can watch communities change across time in a single snap shot. Take the glaciers of Glacier Bay National Park, midway between Juneau and Anchorage, Alaska. The glaciers there have been retreating since the explorer Vancouver’s first expedition in 1794. Since then, the retreat has covered over 100 km, including new coastline, meadows and mountains: 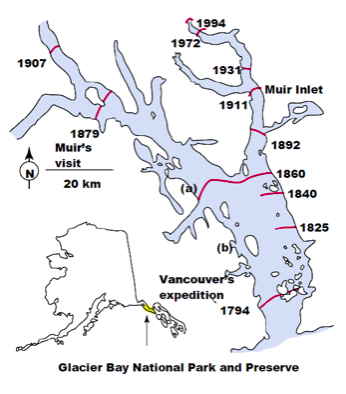 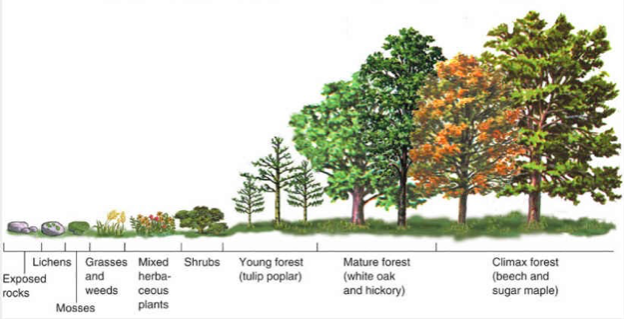 As the glacier retreats, it leaves nutrient poor soil which can only support simple plants such as liverworts, lichens, and other primitive plants. As they photosynthesize and die, we see them enter the decomposer pathway and increase the quality of the soil for later plants. However, this slow glacier retreat is a unique situation. To set up an experiment to test our understanding of succession would require hundreds of years, longer than a scientists lifetime. However, some organisms and communities proceed at a much faster rate, within your own refrigerators. The process of milk decomposition from a community of bacteria can test the same processes and theories in a much more reasonable time frame. This substitution of a simpler and faster community for experimental purposes is called a ‘model’ system.

Milk is a highly nutritious food containing carbohydrates (lactose, or milk sugar), proteins (casein, or curd), and lipids (butterfat). This high level of nutrition makes milk an excellent medium for the growth of bacteria. Pasteurizing milk does not sterilize it (sterilizing kills all bacteria) but merely destroys pathogenic bacteria, leaving many bacteria that can multiply and these bacteria will begin to grow and bring about milk spoilage. Biologists have discovered that as milk ages, changing conditions in the milk bring about a predictable, orderly succession of microorganism communities.

In this laboratory exercise, you will observe successional patterns in several types of milk. You will record changes in the environmental conditions of the types of milk as they age. These changes are a result of changes in the bacterial communities. Here are some of the major bacteria found at various stages.

Just as in any of our experiments, you must use effective scientific method. Develop hypotheses (at least 2—one with different milk types and one with either temperature or time as an independent variable) that you can test in the process of the milk community succession.

We will be performing a gram stain on our milk samples. Remember from our microbiology section that bacteria can be either gram negative (pink) or gram positive (purple). We will also look at these bacteria under a microscope to identify their shapes. Recall that bacteria can be cocci, bacilli, or spirillum.

On each lab bench are several small beakers. You will obtain a sample of the milk samples you need for your experimental design and test the pH, color, consistency, smell and other characteristics of each sample. For each milk sample: