All mollusks have a visceral mass, a mantle, and a foot. The visceral mass contains the digestive, excretory, and reproductive organs. The mantle is a covering. It may secrete a shell. The foot is muscular and is used for locomotion, attachment, and/or food capture.

The mantle and foot can be seen in the figure 1. The visceral mass is underneath the gill. 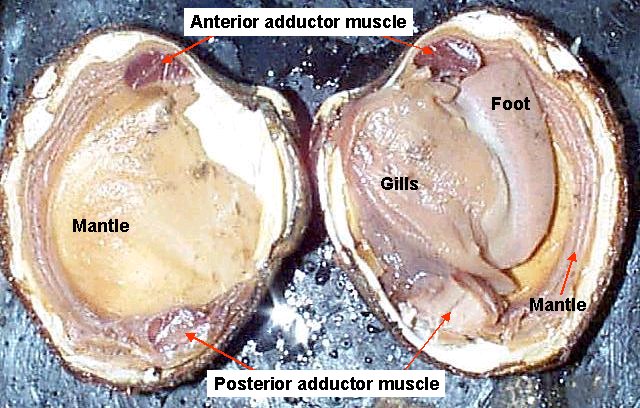 There may be a radula, a structure that resembles a tongue but contains hard plates and is often used for scraping food. The coelom is reduced and limited to the region near the heart.

Most mollusks have an open circulatory system but cephalopods (squids, octopus) have a closed circulatory system. The blood pigment of mollusks is hemocyanin, not hemoglobin. The heart of a clam can be seen in the photograph below. Bivalves have three pairs of ganglia but do not have a brain.

Most mollusks have separate sexes but most snails (gastropods) are hermaphrodites. Some marine mollusks have a ciliated larval form called a trochophore.

Chitons have a dorsal shell composed of 8 plates. A ventral foot is used for locomotion and for attachment to rocks. It pulls itself close to rocks for protection. Observe the chiton on display.

Gastropods have an elongated, flattened foot and usually a head and shell although nudibranchs (sea slugs) and terrestrial slugs lack a shell.

Most are marine but there are also numerous freshwater and terrestrial species. Herbivorous gastropods use a radula to scrape food from surfaces. Carnivores may use a radula to bore a hole through surfaces such as bivalve (clam) shells. Some gastropods such as the slug (below) do not have a shell.

The larvae undergo torsion during development. It is a twisting that positions the visceral mass so that the anus is above the head. It is due to one side of the visceral mass growing faster than the other. The advantage (or function) of torsion is uncertain but it may be to balance the animal or it may be to allow the head to be withdrawn into the shell first when predators approach.

Observe the snails and slugs on display. 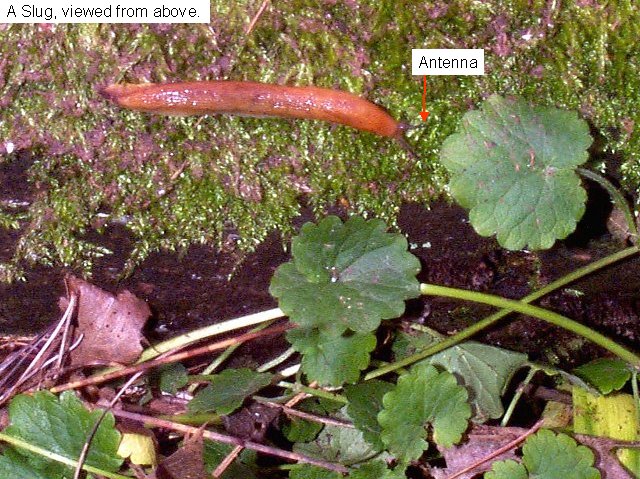 Figure 3. A slug. Slugs do not have shells.

Some gastropod species are terrestrial and have lungs for gas exchange, others are aquatic and use gills.

Bivalves have two shells (valves) held closed by powerful muscles. The shell is produced by the underlying mantle; it grows along the outer margins. They use their foot for burrowing. Mussels use their foot for the production of threads for attachment.

The gills are large because they are used for filter-feeding as well as respiration. Food is trapped by mucus on the gills and moved by cilia. Water enters and exits through siphons.

Obtain a preserved clam for dissection and place it on a dissecting tray. Remove one of the valves (shells) by inserting a scalpel and cutting the adductor muscles on each side of the hinge. See the diagram below for the location of the adductor muscles. 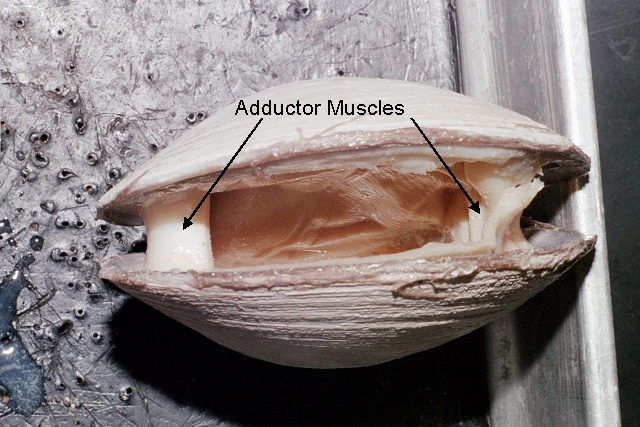 Figure 4. Adductor muscles of a clam.

Figure 5. The anterior and posterior adductor muscles being cut so that the valves can be pulled apart.

Identify the foot, visceral mass, gills, and labial palps. The gills are large because they are used for filter-feeding as well as respiration. Food is trapped by mucus on the gills and moved by cilia to the mouth. Cilia on the labial palps also direct food and mucus to the mouth. 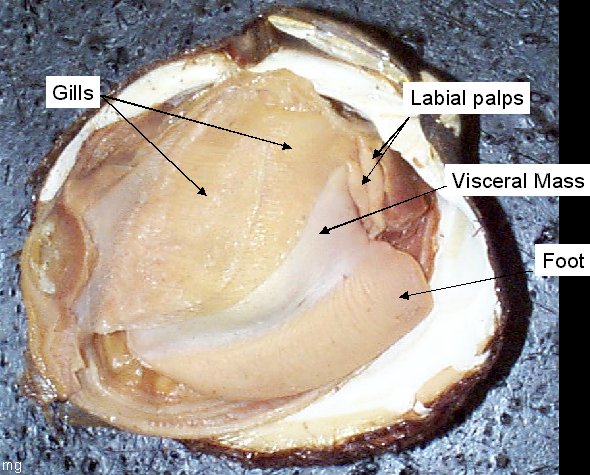 The heart can be found in the area dorsal to and slightly posterior to the visceral mass. The coelom of bivalves is reduced and limited to the area surrounding the heart. Because the coelom is reduced, it is difficult to see the digestive organs. Cut through the visceral mass and identify the intestine. 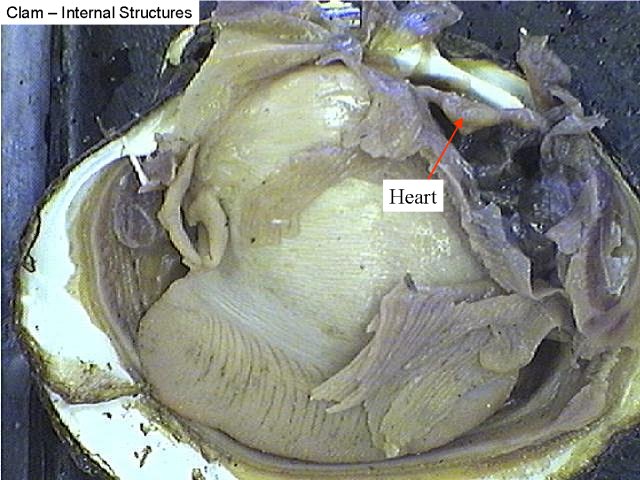 In the photograph below, the foot and visceral mass have been lifted so that the mouth can be seen. Notice the labial palps on either side of the mouth. 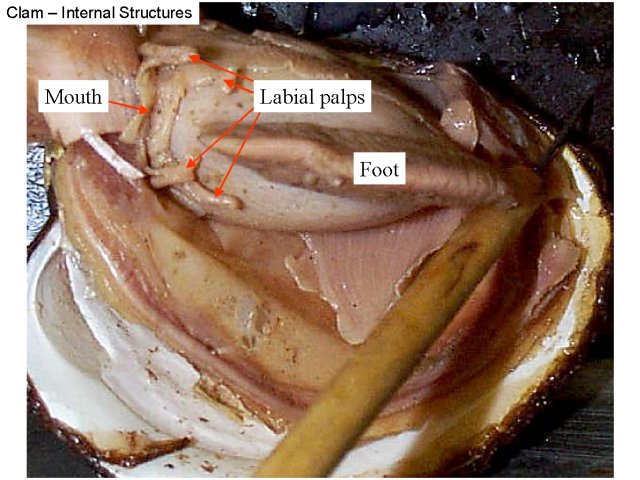 Cephalopods are predators and live in a marine environment. A closed circulatory system allows them to move rapidly in pursuit of prey. They move by jet propulsion; water in the mantle cavity is squirted rapidly through a siphon. The foot has evolved into tentacles around head. Cephalopods have a powerful beak-like structure to tear apart prey. The sense organs of cephalopods are well developed.

Well-developed brains (especially in octopuses) give them a high learning capacity. Cephalopods can hide from enemies by releasing a dark colored fluid from ink sacs.

The shell of a nautilus encloses the animal. A squid’s shell is small and internal. Octopuses do not have shells. Examine representative cephalopods on display.