Flatworms are flattened and have bilateral symmetry.

They are triploblastic (have 3 embryonic tissue layers: ectoderm, mesoderm, and endoderm) and therefore have organ-level of organization. There is no body cavity, so they are acoelomate.

Flatworms have a gastrovascular cavity with one opening (a sac-like gut).

Planarians have a branching sac-like gut (one opening).

The main function of the excretory system is for water regulation. It consists of two structures called protonephridia. Each protonephridium contains flame cells that move excess water into tubes that open to the outside.

Planarians have a head region with sense organs. The nervous system of Dugesia is somewhat more complex than the nerve net of Cnidarians. It consists of a brain and nerve cords arranged in a ladder-like configuration.

Planarians have ocelli (eyespots) allow the presence and intensity of light to be determined. These structures are covered but have an opening to one side and forward. They can tell the direction of light because shadows fall on some of the receptor cells while others are illuminated. They move away from light.

Planarians are hermaphroditic, that is, they contain both male and female sex organs. They can reproduce asexually simply by pinching in half; each half grows a new half.

Movement is accomplished by the use of cilia and also by muscular contractions.

Members of this group are primarily parasites (feed on a host species).

Observe either a preserved liver fluke or a slide of a liver fluke using a dissecting microscope.

Tapeworms live in the intestines of vertebrates.

They may reach 10 m in length (>30 feet). They have no digestive or nervous tissue. Attachment to the intestinal wall is by a scolex, a structure that contains hooks and suckers. 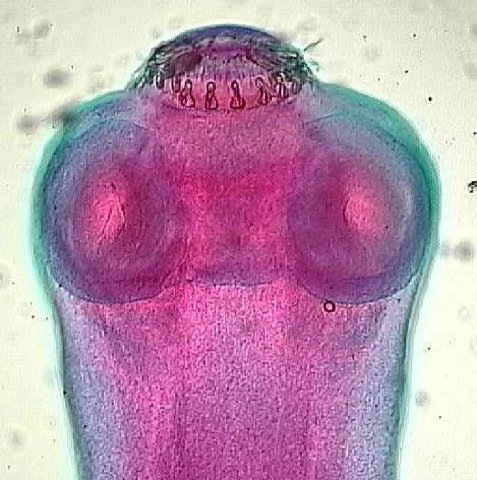 The segments (proglottids) each contain male and female reproductive organs. Eggs are fertilized from sperm, which often come from other proglottids of the same individual. After fertilization, other organs within the proglottid disintegrate and the proglottid becomes filled with eggs.

The intermediate hosts are usually pigs or cattle. They can become infected by drinking water contaminated with human feces.

Tapeworms can be passed to humans in undercooked meat, especially pork.

The photographs below show the scolex and proglottids at increasing distances from the scolex. Those segments closest to the scolex (on the left) are the smallest. Those furthest away (on the right) become filled with zygotes, break away, and pass out with the feces.