An ecosystem is defined as an association of life and the physical environment. Ecosystems take into account both living organisms and the nonliving components like water, soil, light, etc. Ecosystems can be either terrestrial (dessert, forest, grassland) or aquatic (coral reef, pond, estuary).

Within ecosystems scientists study energy transformations. Energy typically enters the ecosystem from the sun, is transferred to photosynthetic organisms (primary producers) and then to organisms that need to eat others for energy, the consumers or heterotrophs. An ecosystem will typically have several levels of consumers. The transfer of energy from organism to organism can be illustrated through trophic levels. A trophic level includes all organisms the same number of transfer steps away from the energy input into an ecosystem. A simple trophic level diagram for a forest ecosystem is illustrated below. Notice the photosynthetic organisms like plants are on the first trophic level, one step away from the energy source. The squirrel is a primary consumer (eating plants directly) but on the second tropic level two steps away from the primary energy source. At each step along the pathway some energy is lost as heat. Therefore at higher tropic levels there are fewer organisms (as noted by the pyramid shape) and most ecosystems support no more than four or five total trophic levels. 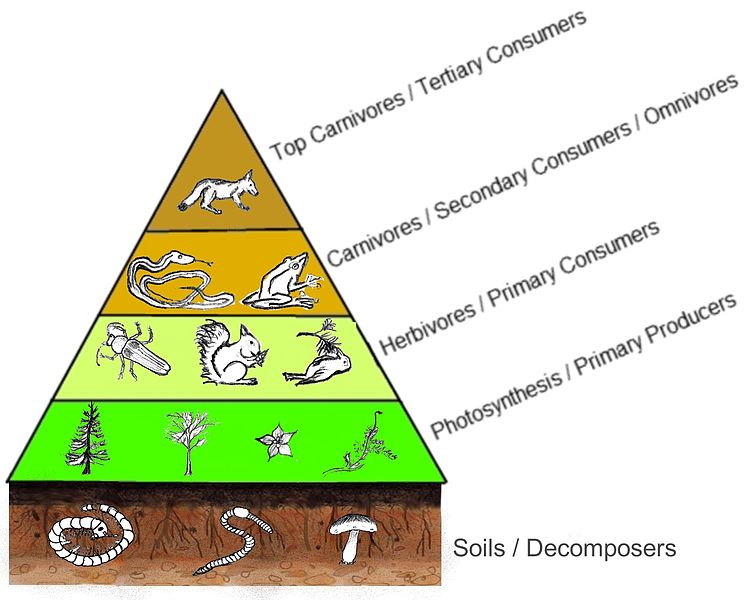 Ecosystems are changing due to human behaviors. Humans negatively impact natural ecosystems through activities such as deforestation, hunting, and pollution. Today’s lab focuses on the impact of eutrophication on aquatic ecosystems. Through eutrophication bodies of water acquire extremely high concentrations of nutrients. The source of these nutrients can be natural or artificial. Humans cause cultural eutrophication through behaviors like run off from agricultural fields, wastewater from sewage treatment plants, and excel detergents running into bodies of water. The excess nutrients fuel photosynthesis causing an increased growth in algae, a photosynthetic primary producer protist, and an algae bloom. During the bloom the algae cover the surface of the water. When the algae die, decomposers in the ecosystem break down the protists using up the oxygen available in the aquatic environment through respiration. As oxygen levels decrease (hypoxia), fish die, and the balance of the ecosystem is destroyed.

In an effort to understand ecosystems and human impact on ecosystems scientists often use models. Modeling of ecosystems serves two main functions. First, the model represents scientist’s best understanding of the relationships/functions that define the ecosystem. Second, models allow scientists to investigate questions that would be impossible to pursue in reality.

Ecosystem models fall into two categories, analytical models and simulation models. Analytical models use math to explain simple linear relationships. Simulation models, more widely used, are used to illustrate complex non linear relationships in ecosystems. Since the natural ecosystem has numerous interactions between living and non living components ecosystem models must simplify this real world situation. Models incorporate only the most important components or group similar components in an effort to effectively represent the ecosystem in a straightforward fashion.

This lab will utilize the Silver Spring model, an analytical model, developed by H. T. Odum in 1957. Silver Springs is a real aquatic ecosystem located in central Florida. Odum developed his model to illustrate energy flow through the different trophic levels. The main organisms in Sliver Sping organized by trophic level are:

The Silver Springs model is on Blackboard as an Excel file. The general model structure is pictured on the next page. Odum’s model contains five state variables representing energy inputs into the four tropic levels and the decomposers. Flux rates describe the addition/removal of energy to/from the various parts of the system and the rate of transfer of energy between the components of the system. In the Excel file you can change the initial values (X) of any or all of the state variables and coefficients (P), and control the length of time simulated. Following a simulation “run” you will be easily able to view graphs of the state variables or community respiration versus time. To change the initial values, simply type over the current value and press return. Use the model to investigate the scenarios below:

We will use the model in two different scenarios in today’s lab, to understand eutrophication and to determine the impact of bread on the ecosystem.

To understand more about eutrophication, you will conduct a laboratory experiment (Part 1) and use the Silver Springs computer model (Part 2)

One potential way to decrease cultural eutrophication is by having higher trophic level organisms consume the algae. We will investigate this possibility using Daphnia, a zooplankton that feeds on green algae, and an alga species called Chorella. Although the information we gain from this activity is useful, it is an over simplification as to what might really occur in the aquatic environment.

Now that you have observed trophic interactions and cultural eutrophication in a lab experiment, apply that knowledge to the computer model. Use the model to analyze the sensitivity of the Silver Springs ecosystem to cultural eutrophication. Remember that alga is a photosynthetic producer on the first trophic level. The Daphnia would be one of the herbivores in the environment on the second trophic level. Change the levels in the model to simulate a eutrophication situation. View the graphs to see how the different trophic level populations change through the simulation.

Eutrophication is not the only way that human activities affect aquatic ecosystems. Tourism in the Silver Spring area has grown lately as a result of more of vacationers visiting Central Florida. When visiting Silver Spring, tourists enjoy feeding the ducks. But, the ducks are gaining weight and becoming dependent on the tourists as a food source disrupting the normal food chain in the environment. Some environmental organizations have voiced displeasure regarding the dependence of ducks on bread handouts from visitors to the lake. Is it feasible to stop feeding the ducks or have they become too reliant on the tourists and the bread handouts?

Use the model to analyze the sensitivity of long-term duck populations to an increase or decrease in bread input. There is a separate variable for bread and the ducks would be on the second trophic level as herbivores. View the graphs to see how the different trophic level populations change through the simulation.