The diagram below shows evolutionary relationships among the major clades of chordates but avoids classification into subphylum and classes. For example, the close relationship between Myxini and the rest of the vertebrates can be seen even though there is uncertainty in the classification of Myxini. 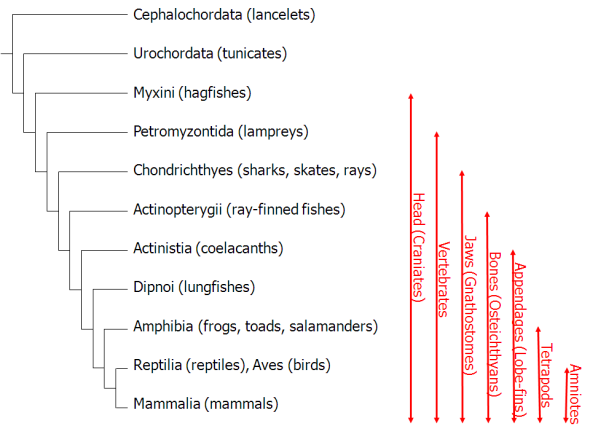 Chordates have the following characteristics at some point in their life history:

The larvae of tunicates resemble the ancestral chordate. It has chordate characteristics and looks like a tadpole. The free-swimming larva develops into a sessile, filter-feeding adult.

The adult has a thick-walled body sac and an incurrent siphon and an excurrent siphon. Gill slits are the only chordate feature retained by the adult form. In some tunicates, the adult form may have been lost. These animals retained the larval form as adults. 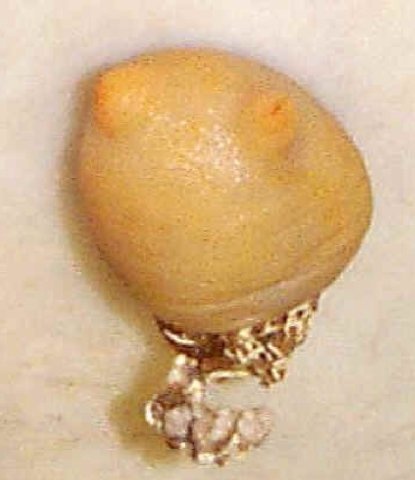 Examine a slide of a lancelet using a dissecting microscope.

Although this animal is not a vertebrate, it has all three of the chordate characteristics. Identify the notochord, nerve chord, and pharyngeal gill slits.

Notice the segmented pattern of the muscles, also a chordate characteristic.

Examine a preserved lancelet and observe the segmented pattern of muscles and the atriopore located on the ventral surface posterior to the pharynx. 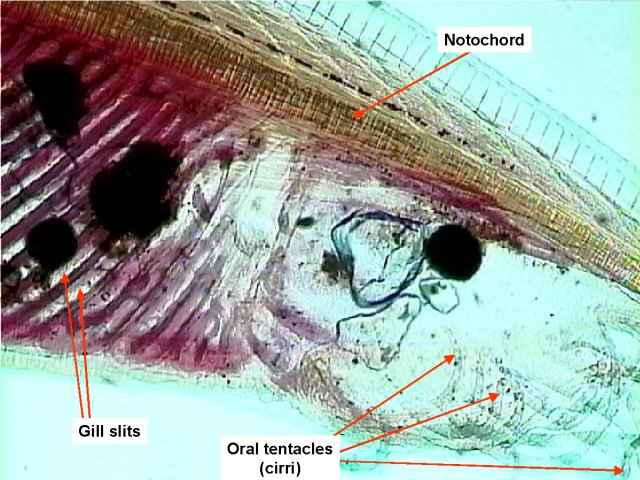 Craniates are chordates with a head. The head contains sensory organs because it is in front of the animal as it moves through the environment.

The evolution of a head with well-developed sensory organs and a corresponding large brain enabled these animals to be active and to feed by predation or other means that required an active animal.

Hagfishes have a cartilaginous skull but do not have jaws. They do not have vertebrae; their notochord provides the support necessary for their muscles to produce movement.

The notochord of vertebrates is generally replaced by a vertebral column composed of numerous small bones called vertebrae that are joined together to form a flexible supporting structure. In most vertebrates, the vertebrae surround the spinal cord.

The vertebral column allows the body to flex and provides attachment sites for muscles. In addition, it surrounds and protects the nerve cord.

Lampreys do not have jaws. Most species of lampreys are parasites. They attach to host fish and feed on the blood of the host.

The larvae are filter feeders that live in freshwater streams. As they mature, they move downstream to the ocean (or lakes) and begin a parasitic life style.

The skeleton is cartilage and the notocord persists in the adult.

Gnathostomes are vertebrates with jaws. The evolution of jaws promoted the switch from filter-feeding to predation and thus promoted an active life style. Jaws evolved from the forward gill supports in fish.

The appearance of jaws transformed the worlds ecology due to improved predation and herbivory. As a result, complex food chains evolved.

Aquatic gnathostomes have a lateral line system. This system is composed of a line of sensory organs on each side of the body. It is able to detect vibrations in the water.

Chondrichthyes include the sharks, and rays. The cartilage skeleton of sharks is partially hardened with calcium. This type of skeleton is strong and is more flexible and lighter than a bony skeleton. The bodies of cartilaginous fish are covered with small toothlike scales. Their teeth are larger versions of these scales.

They do not have a swim bladder but the oil-storing capacity of their livers improves their buoyancy. The shape of the head and caudal fin also lift the animal as it swims. Sharks must swim to keep from sinking.

Some sharks are fast-swimming predators; others are filter feeders.

Fertilization is internal. The pelvic fin is used to transfer sperm to the female.

Some species are oviparous—they lay eggs that hatch outside the mother’s body; some are ovoviviparous—the eggs are retained within the body and young are born alive; and a few are viviparous—they receive some nourishment via a placenta that develops from the yolk sac of the egg.

The reproductive, digestive and excretory system exit the body through a common opening called a cloaca.

Osteichthyans have an ossified (bony) skeleton. The skeleton is hardened with calcium phosphate.

The gills are covered by an operculum so that the gill chamber is enclosed and protected. A swim bladder and is used for buoyancy. It evolved from lungs. The gas content, and thus buoyancy, can be regulated by transfer to and from the blood.

Bony fish have broad, flat scales. The skin contains mucous secreting glands that reduce friction as the fish swims through the water. A lateral line system detects vibrations in the water. Most species are oviparous. Bony fish are the largest group of vertebrates. Approximately 49,000 species have been identified.

The fins are supported by spinelike rays. In ray-finned fishes, the lungs gave rise to the swim bladder which gives the fish buoyancy.

Coelacanths were thought to have been extinct for 75 million years until one was captured in 1938 off the southeastern coast of Africa. The first vertebrate animals to develop lungs were fish. The lungs developed from a sac-like pocket of tissue that formed in the pharynx.

Lungfishes are a group of lobe-finned fish that inhabit stagnant fresh water ponds that dry up. Their lungs allow them to gulp oxygen from the air when it has been depleted from the water. Their lobe fins enable them to walk under water.

The ancestors of lungfish gave rise to amphibians.