Many prokaryotic genes are organized in operons, linked genes transcribed into a single mRNA encoding two or more proteins. Operons usually encode proteins with related functions. Regulating the activity of an operon (rather than multiple single genes encoding single proteins) allows better coordination of the synthesis of several proteins at once. In E. coli, the regulated lac operon encodes three enzymes involved in the metabolism of lactose (an alternative nutrient to glucose). Regulation of an operon (or of a single gene for that matter) can be by repression or by induction. When a small metabolite in a cell binds to a regulatory repressor or inducer protein, the protein undergoes an allosteric change that allows it to bind to a regulatory DNA sequence…, or to un-bind from the DNA. We will see examples of such regulation in the lac and trp operons. Lac operon gene regulation is an example of gene repression as well as induction. Trp (tryptophan) operon regulation is by gene repression. In both the operons, changes in levels of intracellular metabolites reflect the metabolic status of the cell and elicit appropriate changes in gene transcription. We will look at the regulation of both operons.

The mRNA transcribed from the lac operon is simultaneously translated into those three enzymes, as shown below. A. Mechanisms of Control of the Lac Operon

In the animal digestive tract (including ours), genes of the E. coli lac operon regulate the use of lactose as an alternative nutrient to glucose. Think cheese instead of chocolate! The operon consists of lacZ, lacY, and lacA genes that were called structural genes. By definition, structural genes encode proteins that participate in cell structure and metabolic function. As already noted, the lac operon is transcribed into an mRNA encoding the Z, Y and A proteins.

Let’s take a closer look at the structure of the lac operon and the function of the Y, Z and A proteins (below).

The lacZ gene encodes β-galactosidase, the enzyme that breaks lactose (a disaccharide) into galactose and glucose. The lacY gene encodes lactose permease, a membrane protein that facilitates lactose entry into the cells. The role of the lacA gene (a transacetylase) in lactose energy metabolism is not well understood. The I gene to the left of the lac Z gene is a regulatory gene (to distinguish it from structural genes). Regulatory genes encode proteins that interact with regulatory DNA sequences associated with a gene to control transcription. The operator sequence separating the I and Z genes is a transcription regulatory DNA sequence.

The E. coli lac operon is usually silent (repressed) because these cells prefer glucose as an energy and carbon source. In the presence of sufficient glucose, a repressor protein (the I gene product) is bound to the operator, blocking transcription of the lac operon. Even if lactose is available, cells will not be use it as an alternative energy and carbon source when glucose levels adequate. However, when glucose levels drop, the lac operon is active and the three enzyme products are translated. We will see how limiting glucose levels induce maximal lac operon transcription by both derepression and direct induction, leading to maximal transcription of the lac genes only when necessary (i.e., in the presence of lactose and absence of glucose). Let’s look at some of the classic experiments that led to our understanding of E. coli gene regulation in general, and of the lac operon in particular.

In the late 1950s and early 1960s, Francois Jacob and Jacques Monod were studying the use of different sugars as carbon sources by E. coli. They knew that wild type E. coli would not make the \(\beta \)-galactosidase, \(\beta \)-galactoside permease or \(\beta \)-galactoside transacetylase proteins when grown on glucose. Of course, they also knew that the cells would switch to lactose for growth and reproduction if they were deprived of glucose! They then searched for and isolated different E. coli mutants that could not grow on lactose, even when there was no glucose in the growth medium. Here are some of the mutants they studied:

Since double mutants are very rare and triple mutants even rarer, Jacob and Monod inferred that the activation of all three genes in the presence of lactose were controlled together in some way. In fact, it was this discovery that defined the operon as a set of genes transcribed as a single mRNA, whose expression could therefore be effectively coordinated. They later characterized the repressor protein produced by the lacI gene. Jacob, Monod and Andre Lwoff shared the Nobel Prize in Medicine in 1965 for their work on bacterial gene regulation. We now know that negative and positive regulation of the lac operon (described below) depend on two regulatory proteins that together, control the rate of lactose metabolism.

1. Negative Regulation of the Lac Operon by Lactose

Refer to the illustration below to identify the players in lac operon derepression. The repressor protein product of the I gene is always made and present in E. coli cells. I gene expression is not regulated! In the absence of lactose in the growth medium, the repressor protein binds tightly to the operator DNA. While RNA polymerase is bound to the promoter and ready to transcribe the operon, the presence of the repressor bound to the operator sequence close to the Z gene physically blocks its forward movement. Under these conditions, little or no transcript is made. If cells are grown in the presence of lactose, the lactose entering the cells is converted to allolactose. Allolactose binds to the repressor sitting on the operator DNA to form a 2-part complex, as shown below. 2. Positive Regulation of the Lac Operon; Induction by Catabolite Activation

The second control mechanism regulating lac operon expression is mediated by CAP (cAMP-bound catabolite activator protein or cAMP receptor protein). When glucose is available, cellular levels of cAMP are low in the cells and CAP is in an inactive conformation. On the other hand, if glucose levels are low, cAMP levels rise and bind to the CAP, activating it. If lactose levels are also low, the cAMP-bound CAP will have no effect. If lactose is present and glucose levels are low, then allolactose binds the lac repressor causing it to dissociate from the operator region. Under these conditions, the cAMP-bound CAP can bind to the operator in lieu of the repressor protein. In this case, rather than blocking the RNA polymerase, the activated Camp-bound CAP induces even more efficient lac operon transcription. The result is synthesis of higher levels of lac enzymes that facilitate efficient cellular use of lactose as an alternative to glucose as an energy source. Maximal activation of the lac operon in high lactose and low glucose is shown below. 217 Regulation of the Lac Operon

cAMP-bound CAP is an inducer of transcription. It does this by forcing the DNA in the promoter-operator region to bend. And since bending the double helix loosens H-bonds, it becomes easier for RNA polymerase to find and bind the promoter on the DNA strand to be transcribed…, and for transcription to begin. cAMP-CAPinduced bending of DNA is illustrated below. 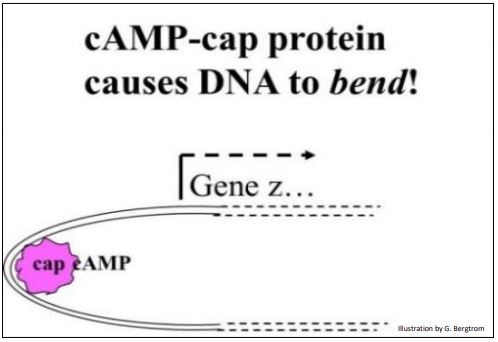 In recent years, additional layers of lac operon regulation have been uncovered. In one case, the ability of lac permease to transport lactose across the cell membrane is regulated. In another, additional operator sequences have been discovered to interact with a multimeric repressor to control lac gene expression.

a) Regulation of Lactose use by Inducer Exclusion

When glucose levels are high (even in the presence of lactose), phosphate is consumed to phosphorylate glycolytic intermediates, keeping cytoplasmic phosphate levels low. Under these conditions, unphosphorylated EIIAGlc binds to the lactose permease enzyme in the cell membrane, preventing it from bringing lactose into the cell. High glucose levels block lactose entry into the cells, effectively preventing allolactose formation and the derepression of the lac operon. Inducer exclusion is thus a logical way for the cells to handle an abundance of glucose, whether or not lactose is present. On the other hand, if glucose levels are low in the growth medium, phosphate concentrations in the cells rise sufficiently for a specific kinase to phosphorylate the EIIAGlc. Phosphorylated EIIAGlc then undergoes an allosteric change and dissociates from the lactose permease, making it active so that more lactose can enter the cell. In other words, the inducer is not “excluded” under these conditions!

The kinase that phosphorylates EIIAGlc is part of a phosphoenolpyruvate (PEP)- dependent phosphotransferase system (PTS) cascade. When extracellular glucose levels are low, the cell activates the PTS system in an effort to bring whatever glucose is around into the cell. But the last enzyme in the PTS phosphorylation cascade is the kinase that phosphorylates EIIAGlc. Phosphorylated EIIAGlc dissociates from the lactose permease, re-activating it, bringing available lactose into the cell from the medium.

The lac repressor is a tetramer of identical subunits (below). Each subunit contains a helix-turn-helix motif capable of binding to DNA. However, the operator DNA sequence downstream of the promoter in the operon consists of a pair of inverted repeats spaced apart in such a way that they can only interact two of the repressor subunits, leaving the function of the other two subunits unknown… that is, until recently!

Two more operator regions were recently characterized in the lac operon. One, called O2, is within the lac z gene itself and the other, called O3, lies near the end of, but within the lac I gene. Apart from their unusual location within actual genes, these operators, which interact with the remaining two repressor subunits, went undetected at first because mutations in the O2 or the O3 region individually do not contribute substantially to the effect of lactose in derepressing the lac operon. Only mutating both regions at the same time results in a substantial reduction in binding of the repressor to the operon.

B. Mechanism of Control of the Tryptophan Operon

Enzyme 1 is a multimeric protein, made from polypeptides encoded by the trp5 and trp4 genes. The trp1 and trp2 gene products make up Enzyme 3. If cellular tryptophan levels drop because the amino acid is rapidly consumed (e.g., due to demands for proteins during rapid growth), E. coli cells will continue to synthesize the amino acid, as illustrated below. On the other hand, if tryptophan consumption slows down, tryptophan accumulates in the cytoplasm. Excess tryptophan will bind to the trp repressor. The trp-bound repressor then binds to the trp operator, blocking RNA polymerase from transcribing the operon. The repression of the trp operon by trp is shown below.

In this scenario, tryptophan is a co-repressor. The function of a co-repressor is to bind to a repressor protein and change its conformation so that it can bind to the operator.

219 Repression of the Tryptophan (TRP) Operon