4) Which class of molecules is the most antigenic?

7) Which type of antigen-presenting molecule is found on all nucleated cells?

8) Which type of antigen-presenting molecule is found only on macrophages, dendritic cells, and B cells?

11) Cytotoxic T cells will bind with their TCR to which of the following?

12) A ________ molecule is a glycoprotein used to identify and distinguish white blood cells.

14) Which of the following would be a T-dependent antigen?

15) Which of the following would be a BCR?

16) Which of the following does not occur during the lag period of the primary antibody response?

17) A patient is bitten by a dog with confirmed rabies infection. After treating the bite wound, the physician injects the patient with antibodies that are specific for the rabies virus to prevent the development of an active infection. This is an example of:

18) A patient gets a cold, and recovers a few days later. The patient's classmates come down with the same cold roughly a week later, but the original patient does not get the same cold again. This is an example of:

19) For many uses in the laboratory, polyclonal antibodies work well, but for some types of assays, they lack sufficient ________ because they cross-react with inappropriate antigens.

20) How are monoclonal antibodies produced?

21) When using an EIA to study microtubules or other structures inside a cell, we first chemically fix the cell and then treat the cells with alcohol. What is the purpose of this alcohol treatment?

22) In a direct fluorescent antibody test, which of the following would we most likely be looking for using a fluorescently-labeled mAb?

23) There are two critically important aspects of adaptive immunity. The first is specificity, while the second is ________.

24) ________ immunity involves the production of antibody molecules that bind to specific antigens.

26) The variable regions of the heavy and light chains form the ________ sites of an antibody.

28) MHC II molecules are made up of two subunits (α and β) of approximately equal size, whereas MHC I molecules consist of a larger α subunit and a smaller subunit called ________.

29) A ________ T cell will become activated by presentation of foreign antigen associated with an MHC I molecule.

30) A ________ T cell will become activated by presentation of foreign antigen in association with an MHC II molecule.

31) A TCR is a protein dimer embedded in the plasma membrane of a T cell. The ________ region of each of the two protein chains is what gives it the capability to bind to a presented antigen.

32) Peripheral tolerance mechanisms function on T cells after they mature and exit the ________.

33) Both ________ and effector T cells are produced during differentiation of activated T cells.

35) T-independent antigens can stimulate B cells to become activated and secrete antibodies without assistance from helper T cells. These antigens possess ________ antigenic epitopes that cross-link BCRs.

36) A(n) ________ pathogen is in a weakened state; it is still capable of stimulating an immune response but does not cause a disease.

37) ________ immunity occurs when antibodies from one individual are harvested and given to another to protect against disease or treat active disease.

38) In the practice of ________, scabs from smallpox victims were used to immunize susceptible individuals against smallpox.

39) When we inject an animal with the same antigen a second time a few weeks after the first, ________ takes place, which means the antibodies produced after the second injection will on average bind the antigen more tightly.

41) If we used normal mouse mAbs to treat human disease, multiple doses would cause the patient to respond with ________ against the mouse antibodies.

42) A polyclonal response to an infection occurs because most antigens have multiple ________,

44) To detect antibodies against bacteria in the bloodstream using an EIA, we would run a(n) ________, which we would start by attaching antigen from the bacteria to the wells of a microtiter plate.

45) What is the difference between humoral and cellular adaptive immunity?

46) What is the difference between an antigen and a hapten?

48) What is the basic difference in effector function between helper and cytotoxic T cells?

49) What necessary interactions are required for activation of helper T cells and activation/effector function of cytotoxic T cells?

50) Briefly compare the pros and cons of inactivated versus live attenuated vaccines.

52) Explain why hemolysis in the complement fixation test is a negative test for infection.

53) What is meant by the term “neutralizing antibodies,” and how can we quantify this effect using the viral neutralization assay?

54) Why is it important in a sandwich ELISA that the antigen has multiple epitopes? And why might it be advantageous to use polyclonal antisera rather than mAb in this assay?

55) Which mechanism of antigen presentation would be used to present antigens from a cell infected with a virus?

56) Which pathway of antigen presentation would be used to present antigens from an extracellular bacterial infection?

57) A patient lacks the ability to make functioning T cells because of a genetic disorder. Would this patient’s B cells be able to produce antibodies in response to an infection? Explain your answer.

58) Suppose you were screening produce in a grocery store for the presence of E. coli contamination. Would it be better to use a polyclonal anti-E. coli antiserum or a mAb against an E. coli membrane protein? Explain.

59) Both IgM and IgG antibodies can be used in precipitation reactions. However, one of these immunoglobulin classes will form precipitates at much lower concentrations than the other. Which class is this, and why is it so much more efficient in this regard?

61) Label the primary and secondary antibodies, and discuss why the production of end product will be proportional to the amount of antigen. 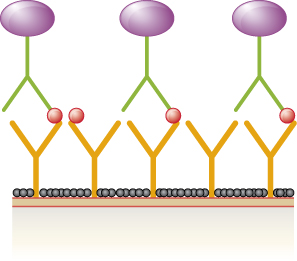