In order to protect against infection, one of the first things the body must do is detect the presence of microorganisms. The body initially does this by recognizing molecules unique to groups of related microorganisms and are not associated with human cells. These unique microbial molecules are called pathogen-associated molecular patterns or PAMPs. In addition, unique molecules displayed on stressed, injured, infected, or transformed human cells also be recognized as a part of innate immunity. These are often referred to as danger-associated molecular patterns or DAMPs . In all, the innate immune system is thought to recognize approximately 103 molecular patterns. 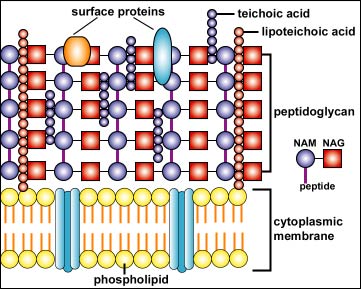 Figure 1: (left) Structure of a Gram-Negative Cell Wall. The Gram-negative cell wall is composed of a thin, inner layer of peptidoglycan and an outer membrane consisting of molecules of phospholipids, lipopolysaccharides (LPS), lipoproteins and surface proteins. The lipopolysaccharide consists of lipid A and O polysaccharide. (right) The Gram-positive cell wall appears as dense layer typically composed of numerous rows of peptidoglycan, and molecules of lipoteichoic acid, wall teichoic acid and surface proteins.

Examples of microbial-associated PAMPs include: Figure 2: Structure of an Acid-Fast Cell Wall. In addition to peptidoglycan, the acid-fast cell wall of Mycobacterium contains a large amount of glycolipids, especially mycolic acids. The peptidoglycan layer is linked to arabinogalactan (D-arabinose and D-galactose) which is then linked to high-molecular weight mycolic acids. The arabinogalactan/mycolic acid layer is overlaid with a layer of polypeptides and mycolic acids consisting of free lipids, glycolipids, and peptidoglycolipids. Other glycolipids include lipoarabinomannan and phosphatidyinositol mannosides (PIM). Because of its unique cell wall, when it is stained by the acid-fast procedure, it will resist decolorization with acid-alcohol and stain red, the color of the initial stain, carbol fuchsin. With the exception of a very few other acid-fast bacteria such as Nocardia, all other bacteria will be decolorized and stain blue, the color of the methylene blue counterstain.

Examples of DAMPs associated with stressed, injured, infected, or transformed host cells and not found on normal cells include:

To recognize PAMPs such as those listed above, various body cells have a variety of corresponding receptors called pattern-recognition receptors or PRRs capable of binding specifically to conserved portions of these molecules. Cells that typically have pattern recognition receptors include macrophages , dendritic cells , endothelial cells , mucosal epithelial cells, and lymphocytes .

What are DAMPs and why would it be an advantage for them to initiate an inflammatory response similar to PAMPs?