Where does the DNA live?

The answer depends on if the cell is prokaryotic or eukaryotic. The main difference between the two types of cells is the presence of a nucleus. And in eukaryotic cells, DNA lives in the nucleus.

The nucleus is a membrane-enclosed organelle found in most eukaryotic cells. The nucleus is the largest organelle in the cell and contains most of the cell's genetic information (mitochondria also contain DNA, called mitochondrial DNA, but it makes up just a small percentage of the cell’s overall DNA content). The genetic information, which contains the information for the structure and function of the organism, is found encoded in DNA in the form of genes. A gene is a short segment of DNA that contains information to encode an RNA molecule or a protein strand. DNA in the nucleus is organized in long linear strands that are attached to different proteins. These proteins help the DNA coil up for better storage in the nucleus. Think how a string gets tightly coiled up if you twist one end while holding the other end. These long strands of coiled-up DNA and proteins are called chromosomes. Each chromosome contains many genes. The function of the nucleus is to maintain the integrity of these genes and to control the activities of the cell by regulating gene expression. Gene expression is the process by which the information in a gene is "decoded" by various cell molecules to produce a functional gene product, such as a protein molecule or an RNA molecule.

The degree of DNA coiling determines whether the chromosome strands are short and thick or long and thin. Between cell divisions, the DNA in chromosomes is more loosely coiled and forms long, thin strands called chromatin. Before the cell divides, the chromatin coil up more tightly and form chromosomes. Only chromosomes stain clearly enough to be seen under a microscope. The word chromosome comes from the Greek word chroma (color), and soma(body), due to its ability to be stained strongly by dyes.

The nucleus of many cells also contains a non-membrane bound organelle called anucleolus, shown in Figure below. The nucleolus is mainly involved in the assembly of ribosomes. Ribosomes are organelles made of protein and ribosomal RNA (rRNA), and they build cellular proteins in the cytoplasm. The function of the rRNA is to provide a way of decoding the genetic messages within another type of RNA (called mRNA), into amino acids. After being made in the nucleolus, ribosomes are exported to the cytoplasm, where they direct protein synthesis. 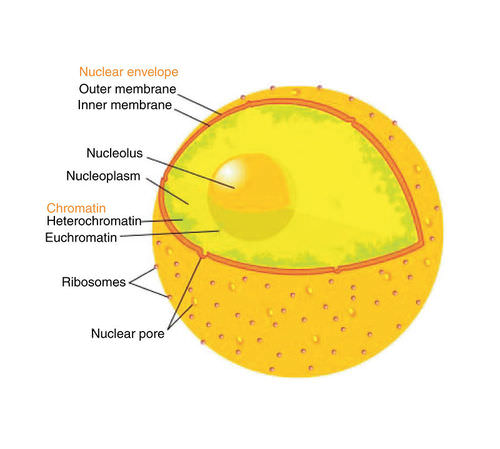 The eukaryotic cell nucleus. Visible in this diagram are the ribosome-studded double membranes of the nuclear envelope, the DNA (as chromatin), and the nucleolus. Within the cell nucleus is a viscous liquid called nucleoplasm, similar to the cytoplasm found outside the nucleus. The chromatin (which is normally invisible), is visible in this figure only to show that it is spread throughout the nucleus.