Recall the Central Dogma of molecular biology: DNA is transcribed into RNA, which is translated into protein. We will cover the material in that order, since that is the direction that information flows.

The liberated pyrophosphate is cleaved in the cell to 2 Pi, an energetically favorable reaction that drives the reaction in the direction of synthesis. In the presence of excess PPi, the reverse reaction of pyrophosphorolysis can occur. Synthesis always proceeds in a 5' to 3' direction (with respect to the growing RNA chain). The template is read in a 3' to 5' direction.

1. This one RNA polymerase synthesizes all classes of RNA

2. It is composed of four subunits.

a. Core and holoenzyme

Holoenzyme = a2bb's = core + s = can initiatetranscription accurately as the proper site, as determined by the promoter

A promoter can be defined in two ways. Mode of action of sfactors

The presence of the s factor causes the RNA polymerase holoenzyme to be selective in choosing the site of initiation. This is accomplished primarily through effects on the dissociation rate of RNA polymerase from DNA.

Events at initiation of transcription e. The incoming nucleotide is linked to the growing RNA chain by nucleophilic attack of the 3' OH on the a phosphoryl of the NTP, with liberation of pyrophosphate.

f. The reaction progresses (the enzyme moves) about 50 nts per sec. This is much slower than the rate of replication (about 1000 nts per sec).

a. Rifamycins, e.g. rifampicin: bind the b subunit to block initiation. The drug prevents addition of the 3rd or 4th nucleotide, hence the initiation process cannot be completed.

How do we know the site of rifampicin action is the b subunit? Mutations that confer resistance to rifampicin map to the rpoBgene.

b. Streptolydigins: bind to the b subunit to inhibit chain elongation.

These effects of rifamycins and streptolydigins, and the fact that they act on the b subunit, argue that the b subunit is required for nucleotide addition to the growing chain.

c. Heparin, a polyanion, binds to the b' subunit to prevent binding to DNA in vitro

1. Eukaryotes have 3 different RNA polymerases in their nuclei.

a. The genes and encoded proteins for the subunits of the yeast RNA polymerases have been isolated and the sequences determined, and some functional analysis has been done.

c. Some subunits are common to all three RNA polymerases.

e. The largest subunit has a carboxy‑terminal domain (CTD)with an unusual structure: tandem repeats of the sequence Tyr‑Ser‑Pro‑Thr‑Ser‑Pro‑Thr. The yeast enzyme has 26 tandem repeats and the mammalian enzyme has about 50. These can be phophorylated on Ser and Thr to give a highly charged CTD. It is not known if the same set of TAFs are in the TFIID for all promoters transcribed by RNA polymerase II, or if some are used only for certain types of promoters. TFIID is the only sequence‑specific general transcription factor so far characterized, and it binds in the minor groove of the DNA. It is also used at TATA‑less promoters, so the role of the sequence ‑specific binding is still under investigation.

Subunits of the human factor These studies show that RNA polymerase II can exist in several different states or complexes. One is in a very large holocomplex containing the mediator. In this state, it will accurately initiate transcription when directed by TFIID, and respond to activators (Table 3.1.6). The mediator subcomplex appears to be able to dissociate and reassociate with RNA polymerase II and GTFs. Indeed, this reassociation could be the step that was assayed in the identification of mediator. Without mediator, RNA polymerase II plus GTFs can initiate transcription at the correct place (as directed by TFIID), but they do not respond to activators. In the absence of GTFs, RNA polymerase II is capable of transcribing DNA templates, but it will not begin transcription at the correct site. Hence it is competent for elongation but not initiation. 7. Targets for the activator proteins

The targets for transcriptional activator proteins may be some component of the initiation complex. One line of investigation is pointing to the TAFs in TFIID as well as TFIIB as targets for the activators. Thus the activators may facilitate the ordered assembly of the intiation complex by recruiting GTFs. However, the holoenzyme contains the "mediator" or SRB complex that can mediate response to activators. Thus the activators may serve to recruit the holoenzyme to the promoter. Further studies are required to establish whether one or the other is correct, or if these are separate paths to activation.

a. Core promoter covers the start site of transcription, plus an upstream control element located about 70 bp further 5'.

b. The factor UBF1 binds to a G+C rich sequence in both the upstream control element and in the core promoter.

c. A multisubunit complex called SL1 binds to the UBF1‑DNA complex, again at both the upstream and core elements.

d. One of the subuntis of SL1 is TBP ‑ the TATA‑binding protein from TFIID!

e. RNA polymerase I then binds to this complex of DNA+UBF1+SL1 to initiate transcription at the correct nucleotide and the elongate to make pre‑rRNA. 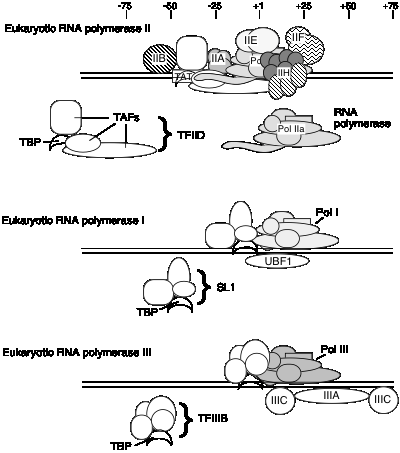 e. RNA polymerase III binds to the complex of TFIIIB+DNA to accurately and efficiently initiated transcription.

TBP seems to play a common role in directing RNA polymerase (I, II and III) to initiate at the correct place. The multisubunit factors that contain TBP (TFIID, SL1 and TFIIIB) may serve as positioning factors for their respective polymerases.