Epistasis (which means “standing upon”) occurs when the phenotype of one locus masks, or prevents, the phenotype of another locus. Thus, following a dihybrid cross fewer than the typical four phenotypic classes will be observed with epistasis. As we have already discussed, in the absence of epistasis, there are four phenotypic classes among the progeny of a dihybrid cross. The four phenotypic classes correspond to the genotypes: A_B_, A_bb, aaB_, and aabb. If either of the singly homozygous recessive genotypes (i.e. A_bb or aaB_) has the same phenotype as the double homozygous recessive (aabb), then a 9:3:4 phenotypic ratio will be obtained. For example, in the Labrador Retriever breed of dogs (Figure 6.5), the B locus encodes a gene for an important step in the production of melanin. The dominant allele, B is more efficient at pigment production than the recessive b allele, thus B_ hair appears black, and bb hair appears brown. A second locus, which we will call E, controls the deposition of melanin in the hairs. At least one functional E allele is required to deposit any pigment, whether it is black or brown. Thus, all retrievers that are ee fail to deposit any melanin (and so appear pale yellow), regardless of the genotype at the B locus (Figure 6.6).

Figure 6.6: Genotypes and phenotypes among the progeny of a dihybrid cross of Labrador Retrievers heterozygous for two loci affecting coat color. The phenotypes of the progeny are indicated by the shading of the cells in the table: black coat (black, E_B_); chocolate coat (brown, E_bb); yellow coat (yellow, eeB_ or eebb). (Original-Locke-CC:AN)

In some cases, a dominant allele at one locus may mask the phenotype of a second locus. This is called dominant epistasis, which produces a segregation ratio such as 12:3:1, which can be viewed as a modification of the 9:3:3:1 ratio in which the A_B_ class is combined with one of the other genotypic classes that contains a dominant allele. One of the best known examples of a 12:3:1 segregation ratio is fruit color in some types of squash (Figure 6.7). Alleles of a locus that we will call B produce either yellow (B_) or green (bb) fruit. However, in the presence of a dominant allele at a second locus that we call A, no pigment is produced at all, and fruit are white. The dominant A allele is therefore epistatic to both B and bb combinations (Figure 6.8). One possible biological interpretation of this segregation pattern is that the function of the A allele somehow blocks an early stage of pigment synthesis, before neither yellow or green pigments are produced. 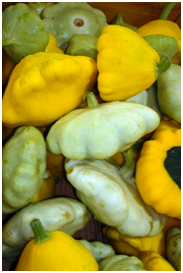 Figure 6.8: Genotypes and phenotypes among the progeny of a dihybrid cross of squash plants heterozygous for two loci affecting fruit color. (Original-Deyholos-CC:AN)

When a dihybrid cross produces progeny in two phenotypic classes in a 15:1 ratio, this can be because the two loci’s gene products have the same (redundant) functions within the same biological pathway. Yet another pigmentation pathway, in this case in wheat, provides an example of this duplicate gene action. The biosynthesis of red pigment near the surface of wheat seeds (Figure 6.9) involves many genes, two of which we will label A and B. Normal, red coloration of the wheat seeds is maintained if function of either of these genes is lost in a homozygous mutant (e.g. in either aaB_ or A_bb). Only the doubly recessive mutant (aabb), which lacks function of both genes, shows a phenotype that differs from that produced by any of the other genotypes (Figure 6.10). A reasonable interpretation of this result is that both genes encode the same biological function, and either one alone is sufficient for the normal activity of that pathway. Figure 6.10: Genotypes and phenotypes among the progeny of a dihybrid cross of a wheat plants heterozygous for two loci affecting seed color. (Original-Deyholos-CC:AN)

The progeny of a dihybrid cross may produce just two phenotypic classes, in an approximately 9:7 ratio. An interpretation of this ratio is that the loss of function of either A or B gene function has the same phenotype as the loss of function of both genes, due to complementary gene action (meaning that the functions of both genes work together to produce a final product). For example, consider a simple biochemical pathway in which a colorless substrate is converted by the action of gene A to another colorless product, which is then converted by the action of gene B to a visible pigment (Figure 6.11). Loss of function of either A or B, or both, will have the same result: no pigment production. Thus A_bb, aaB_, and aabb will all be colorless, while only A_B_ genotypes will produce pigmented product (Figure 6.12). The modified 9:7 ratio may therefore be obtained when two genes act together in the same biochemical pathway, and when their loss of function phenotypes are indistinguishable from each other or from the loss of both genes.

Figure 6.11: A simplified biochemical pathway showing complementary gene action of A and B. Note that in this case, the same phenotypic ratios would be obtained if gene B acted before gene A in the pathway. (Original-Deyholos-CC:AN) Figure 6.12: Genotypes and phenotypes among the progeny of a dihybrid cross of a hypothetical plant heterozygous for two loci affecting flower color. (Original-Deyholos-CC:AN)