Cells do not always part after mitosis, but sometimes stay together to form multicellular organisms. This increases their size, and hence provides a defense against predators. Unfortunately, it is not possible simply to increase the size of cell because the really big cell will have less surface (in relation to the volume), therefore it will have multiple difficulties with photosynthesis, respiration and other processes which relate with surface of cell. But many cells together will make surface big enough (Figure \(\PageIndex{1}\)). Multicellular organism has two modes of growth: scaling the body and multiplying cells. Figure \(\PageIndex{1}\) Origin of multicellularity. It is not feasible just to enlarge cell, surface is too small. But if cells do not part after mitosis, they might form the body which is big enough to escape from predators. This also provide with new mode of growth and possibility of the division of labor (colored cells).

Multicellularity allows these cells also to divide the labor and cooperate. This is extremely important for the future evolution.

Cells in the multicellular body are not connected forever. Sometimes, one or few cells escape and start a new body. This body will be exact copy (clone) of the previous one (vegetative reproduction). It is also possible that when these “escaped cells” go the different route: they become “sex delegates”, gametes. All gametes want syngamy, and these cells will search for the partner of the same species but with another genotype. In case of heterogamy and oogamy, it is easy to recognize because genders will provide a hint: male will search for the female. In case of isogamy, gametes search for the partner with different surface proteins. After they finally mate, a diploid cell (zygote) appears. Zygote may winter and then divide meiotically. This is the simplest life cycle of multicellular organism (Figure \(\PageIndex{2}\)), quite similar to the cycle discussed above for unicellular organism. Figure \(\PageIndex{2}\) Most ancient life cycle of the multicellular organism. Zygote does not grow, it divides meiotically. Somatic (“grey”) cells are going to die, only germ cells transfer their DNA to future generations.

“Escaped cells”, “sex delegates”, or mother cells of gametes from the above is a first stage of the division of labor when cells are separating into two types, germ cells and somatic cells. Somatic cells are those which will eventually die, but germ cells are capable of giving offspring. Having germ cells is not absolutely necessary for multicellular organisms, but most of them have well separated germ lines. Thus, origin of death is directly connected with this separation: somatic cells are not needed for future generations. Unicellular organisms are potentially immortal, and same are cancer cells which also escape from organism (but they cannot make the new one).

Life cycle of multicellular organism could be described starting from haplont (Figure \(\PageIndex{3}\)). When environment conditions are favorable, it has vegetative reproduction. One variant of vegetative reproduction is that cell (mitospore) separates itself from a haplont, then divides into more cells and becomes a new haplont. Sometimes, whole chunks are separated and grow into new haplonts. When conditions change, haplont may start the sexual reproduction: syngamy. In syngamy, one gamete separates from the haplont and unites with a gamete from another haplont. Together, gametes form a zygote. This zygote might go straight to meiosis (as it happens in unicellular eukaryotes) but more frequently, zygote will grow, divide mitotically and finally becomes a diplont. This diplont might be superficially almost identical to haplont but every cell of it contains diploid nucleus (every chromosome has a pair). Diplont (similarly to haplont) may reproduce itself vegetatively (make clones): cell separates itself from a diplont, then divides mitotically into more cells and becomes a new diplont.

The diplont is also capable for asexual reproduction: there could be a cell separates itself from a diplont and divides with meiosis creating four spores, each of them will grow into haplont. Figure \(\PageIndex{3}\) General life cycle. Haploid part is on the left, diploid on the right, syngamy on the top, meiosis on the bottom. "M" letter is used to label mitosis. 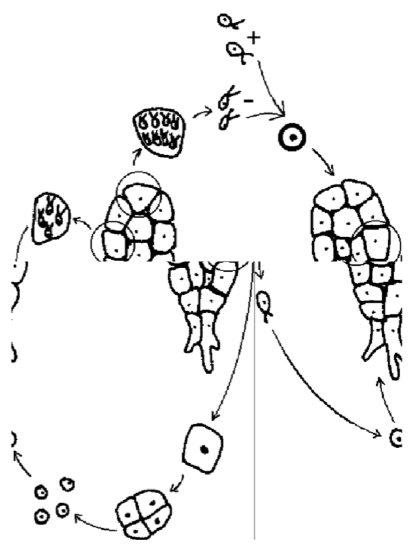 Figure \(\PageIndex{4}\) Sporic life cycle. Overview. Haploid part is on the left, diploid on the right, syngamy on the top, meiosis on the bottom.

In all, there are three types of life cycles: sporic, zygotic, which is the most similar to unicellular and most primitive; and gametic, which is used by animals and a few protists (Figure \(\PageIndex{5}\)). The zygotic life cycle starts with syngamy and goes to meiosis. It has no diplont. Gametic life cycle goes from meiosis to syngamy. It has no haplont.

Protists have all three types of life cycles whereas higher groups have only one. Animals exhibit gametic cycle, whereas plants\(_2\) retained the more primitive sporic cycle.

The most striking difference between unicellular and multicellular life cycles is that zygote of multicellular organism may start to make diploid body (diplont) which sometimes is visually almost identical to haplont. This is because in the evolutionary perspective, diplonts are “better” than haplonts. Frequent situation of gene dominance allows only one variant (allele) of the gene to work, that may save organism from lethal mutations. An increased number of genes could help to make more proteins. A third reason is that diplonts’ genomes are more diverse. One gene may be able to withstand one group of conditions, and the other variant may have a different set of possible conditions. Therefore, diplont is able to take advantage of the capabilities of both genetic variants. As a consequence, the evolution of life cycles goes from zygotic (similar to unicellular) to the sporic cycle (Figure \(\PageIndex{6}\)), and then to the more and more expressed domination of diplont, and finally to the complete reduction of haplont, gametic life cycle. It is still an open question how zygotic protists evolved to the sporic side. Most probably, zygote (which is diploid by definition) did not want to divide meiotically. Instead, it grows (which is seen in some protists) and divides mitotically, giving birth to the diplont. This is how first sporic cycle started. The last step of this evolutionary chain was a complete reduction of haplont: after meiosis, spores were replaced with gametes which immediately go to syngamy.

Ancestors of Vegetabilia (plants\(_2\)) were green algae with zygotic life cycle. It could be imagined that their zygote started to grow because these organisms inhabited shallow waters and want their spores to be distributed with a wind. One way for this to happen is to have the spores on the stalk of the plant. This is probably the reason of zygote growth: primordial diplonts of plants\(_2\) were simply sporangia, structures bearing spores. Then the benefits of diploid condition described above started to appear, and these primitive plants went onto the road of haplont reduction. However, some Vegetabilia (liverworts, mosses and hornworts), still have haplont domination. This is probably because their haplonts are poikilohydric (it is explained in next chapters), adaptation which is beneficial for small plants.

Life cycle of plants\(_2\) is sporic, but the science tradition uses plant-related names for the stages. The cycle (Figure \(\PageIndex{7}\)) begins with a diplont called a sporophyte, which produces spores. Sporophyte bears a sporangium, inside which mother cell of spores uses meiosis to make spores. The spores germinate and grow into haplont called gametophyte. Gametophyte produces gametes, specifically a spermatozoa (or simply “sperms”) and an oocyte (egg cell). These gametes are developed in special organs—gametangia. Gametangium which contains male gametes (sperms) is called antheridium, and female gametangium is archegonium, the last normally contains only one egg cell (oocyte).

By syngamy (oogamy in this case), the two gametes form a zygote. Next, a young sporophyte grows on the gametophyte, and finally, the cycle starts again. Again, sporophyte of Vegetabilia starts its life as a parasite on gametophyte. Even flowering plants have this stage called embryo. Maybe, this is why the gametophyte of plants\(_2\) has never been reduced completely to transform their cycle into gametic. Even in most advanced plant lineages, their male (which makes only sperms) and female gametophytes have minimum 3 and 4 cells, respectively, but not 0!