The goal of this exercise is to learn about the protists. We will study major groups and for most of the groups, we will study representative genera.

Kinetoplastids are flagellated and unicellular. They have a dark staining region of mitochondria called a kinetoplast.

Euglena are unicellular. Many Euglenids feed by phagocytosis. Many species of Euglenids are photosynthetic but can become heterotrophic when sunlight is unavailable (mixotrophs).

Euglena use flagella for moving. The outer covering called a pellicle, is flexible and assists in moving. Some have an eyespot with a photoreceptor is capable of detecting the presence of light. Reproduction is asexual.

Diatoms are the most numerous unicellular algae in the oceans and as such are an important source of food and oxygen. They are also important in freshwater environments. They capture 20 to 25% of solar energy captured by living organisms. The cell walls of diatoms contain silica (a component of glass) and are formed in 2 halves like a pillbox. Their remains form diatomaceous earth. It is used for filtering agents, and abrasives such as scouring powders. Diatoms are a major component of phytoplankton in freshwater and marine environments.

Brown algae are autotrophs (photosynthetic). Their characteristic brown color is due to carotenoid pigments. They are multicellular and range in size from small to very large. Some are 50 m to 100 m long. They are often found along rocky shores in temperate climates. The body (thallus) contains holdfasts for attachment, blades, and a stem-like structure that holds the blades is called a stipe. Many species have floats that function in floatation. Some have gas-filled floats. Mucilaginous (slimy) material in the cell walls retards drying in exposed individuals when the tide goes out. Most species have a life cycle with alternation of generations.

Fucus is a common “seaweed” found along the rocky coast. Some species of Fucus have diploid adults. 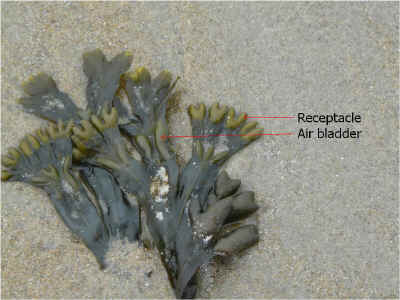 Figure 1. Gametes are produced in the receptacles.

Macrocystis and nereocystis are deep-water kelps.

Sargassam sometimes breaks off to form floating masses. Other marine organisms congregate around these masses.

Laminaria is a brown alga that is usually found attached just below the intertidal zone. It has a life cycle with alternation of generations.

Protective cellulose plates cover dinoflagellates and two flagella enable them to move. One of the flagella lies in a transverse groove that causes cell to spin as it moves.

Most are found in marine or freshwater environments and many are photosynthetic. They are important components of phytoplankton and thus are important in aquatic food chains. This group also includes many heterotrophic and many mixotrophic species.

Some species are responsible for red tides that kill fish and shellfish (Gymnodinium, Gonyaulax, Pfiesteria). Some live as symbiants within some invertebrates. For example, some corals grow faster with dinoflagellates living within their cells. Some species are capable of bioluminescence (they produce light).

The genus Vorticella belongs in this group. 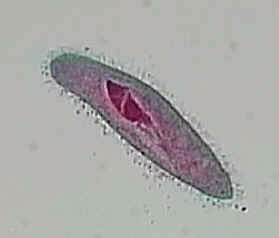 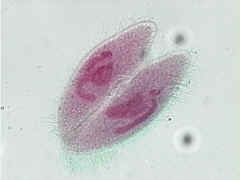 Some species are filamentous but most have a complex pattern of branching. Some coralline forms deposit calcium carbonate in their cell walls, which contributes to the development of coral reefs.

Four common forms of green algae are single-celled, colonial, filamentous, and multicellular. Green algae are thought to be ancestors of the first plants. Both kinds of organisms have the following characteristics in common:

Most species are freshwater but there are many marine species. Some live in damp soil.

Chlamydomonas is a single-celled organism with two flagella. Although this organism is a single cell, the life cycle is similar to that with haploid adults.

Most species of Chlamydomonas are isogamous (both gametes are the same size; they are isogametes), some are oogamous (gametes are two sizes; the larger gametes are eggs, the smaller ones are sperm).

Volvox is a colonial green algae. The cells are arranged in a gelatinous sphere with two flagella directed to the outside. They divide asexually to produce a daughter colony.

Spirogyra is a filamentous form. It has a ribbonlike spiral-shaped chloroplast. The life cycle has haploid adults.

Sexual reproduction occurs by conjugation. Conjugation refers to the process where gametes are transferred from one individual to another by a connection between the two.

The zygote is resistant and overwinters. In the spring, it divides by meiosis to produce haploid filaments.

Ulva is multicellular with a leaflike body that is two cells thick but up to one meter long. The life cycle is alternation of generations. Both the haploid and the diploid generations look alike (isomorphic). 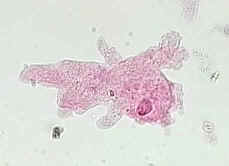 Tubulinids move by cytoplasmic extensions called pseudopodia. They feed by phagocytizing(engulfing) their prey. Tubulinids are found in soil, marine, and freshwater environments. Amoeba proteus (figure 7) is found in freshwater.