DNA is a negatively charged molecule, so DNA molecules will move toward the positive electrode side of the gel when a current is applied. Often times, before DNA is run on a gel, it has first been cut with restriction enzymes. These are enzymes that cut DNA at specific nucleotide sequences. When DNA has been cut by restriction enzymes, the different-sized fragments will migrate at different rates through the gel. DNA that has been exposed to restriction enzymes and then run on a gel will produce multiple bands on the gel. Each band contains DNA of a specific base pair size.

When forensic scientists try to determine the source of DNA found at a crime scene, they can cut the crime scene DNA and DNA from any suspects with the same restriction enzyme. These DNA samples can then be run side by side on a gel and compared to determine if the banding patterns are the same- this is commonly referred to as DNA fingerprinting. Today’s lab illustrates the process of gel electrophoresis with dyes instead of with DNA. Molecules of different dyes are different sizes and charges, so they should move different directions and at different rates.

1. What is the purpose of electrophoresis?

2. What purpose does the buffer serve?

3. Why do dye molecules migrate toward the anode (positive electrode)?

5. Draw your finished gel in the space below. Be sure to label which band is which dye on your figure. 6. Which dye molecule is the smallest? Which is the largest? List dyes by name, not appearance.

7. Which dyes are in the Explorer I mix? List dyes by name, not appearance.

8. Which dyes are in the Explorer II mix? List dyes by name, not appearance.

Exercise 2: Who ate the Cheese?!

In this simulation you will examine crime scene evidence to determine who is responsible for eating the Queen's special imported Lindbergher Cheese. You will model the process of electrophoresis and DNA fingerprinting.

Method of Entry: Unknown, no evidence of force on doors or windows.

Narrative: The cheese was allegedly stolen from the Queen's sitting room the night before the grand ball. The cheese was listed as a gift from the Manchurian diplomat. Officer Li Gase dusted for fingerprints and found none on the table or doors, the maid claimed that they had been wiped clean earlier. The wheel of cheese was on a platform in the sitting room, and half of it had been eaten. We took pictures of the half eaten cheese and sent it to the lab for further tests. Edna N. Zime, the lab technician said that saliva samples could be taken from the teeth imprints of the cheese that was left behind.

Description of Suspicion: The princess was seen entering the sitting room earlier in the evening. She is well known for her love of cheese.

Description of Suspicion: Electra was recently involved in a relationship with the Manchurian diplomat that sources say ended badly. Her motive may have been to sabotage the diplomat's gift to the Queen.

Description of Suspicion: Ada was the maid in charge of cleaning the sitting room. She had access to the cheese.

Description of Suspicion: Gene is the leader of the local Cheese-Makers Guild, he may not have wished for Queen Elizabeth to have cheese from anywhere but his own guild.

Narrative: After receiving the package with the plastic bag marked Crime Scene, the DNA was extracted. Because the sample was so small, the DNA was amplified using the polymerase chain reaction. We isolated the DNA from the four suspects and compared them to the crime scene DNA using DNA restriction analysis. 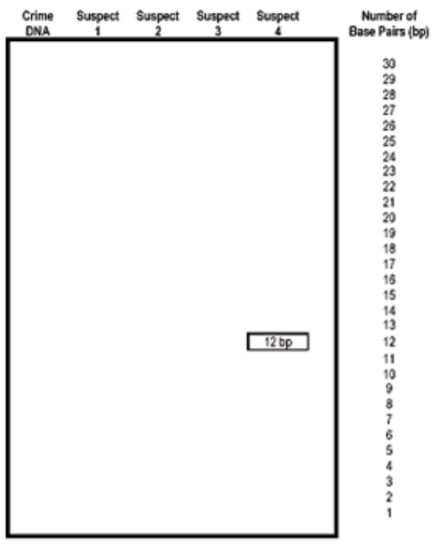 1. On the following page you will find several DNA sequences. Cut each out and turn the resulting strips right side up. The restriction enzyme cuts at every point it finds C C G G, always cutting between the C and the G. Use scissors to cut the DNA sequence at the C C G G points. Label the back of the slips with the suspect number so that you don't get them confused after cutting.

2. Count the number of base pairs (bp) in each piece of DNA that you created. Record the base pair number on the back side of the DNA fragment.

3. Make an enlarged chart like the one shown at left. Use a ruler to ensure that the lengths are uniform.

4. Tape your DNA fragments to the chart, using the base pair numbers as a guideline for fragment placement.

5. Compare the crime scene DNA to the suspects and indicate on your chart which suspect is guilty of eating the cheese. 6. For each of the following tasks performed in the activity, describe what they are actually simulating.

7. Describe how each technique below relates to DNA Fingerprinting: