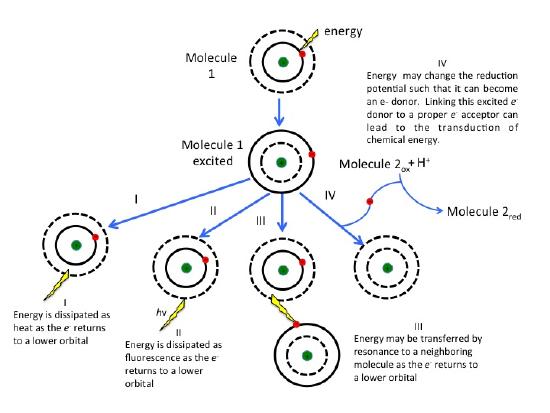 As the excited electron decays back to its lower energy state, the energy can be transferred in a variety of ways. While many so called antenna or auxiliary pigments absorb light energy and transfer it to something known as a reaction center (by mechanisms depicted in option III in Figure 2), it is what happens at the reaction center that we are most concerned with (option IV in the figure above). Here a chlorophyll or bacteriochlorophyll molecule absorbs a photon's energy and an electron is excited. This energy transfer is sufficient to allow the reaction center to donate the electron in a redox reaction to a second molecule. This initiates the electron transport reactions. The result is an oxidized reaction center that must now be reduced in order to start the process again. How this happens is the basis of electron flow in photophosphorylation and will be described in detail below. Figure 4. Cyclic electron flow. The reaction center P840 absorbs light energy and becomes excited, denoted with an *. The excited electron is ejected and used to reduce an FeS protein leaving an oxidized reaction center. The electron its transferred to a quinone, then to a series of cytochromes, which in turn reduces the P840 reaction center. The process is cyclical. Note the gray array coming from the FeS protein going to a ferridoxin (Fd), also in gray. This represents an alternative pathway the electron can take and will be discussed below in noncyclic photophosphorylation. Note that the electron that initially leaves the P480 reaction center is not necessarily the same electron that eventually finds its way back to reduce the oxidized P840. The reaction center of PSII (called P680) delivers its high-energy electrons, one at a time, to a primary electron acceptor, and through the electron transport chain (Pq to cytochrome complex to plastocyanine) to PSI. P680’s missing electron is replaced by extracting an electron from water; thus, water is split and PSII is re-reduced after every photoactivation step. Splitting one H2O molecule releases two electrons, two hydrogen atoms, and one atom of oxygen. Splitting two molecules of water is required to form one molecule of diatomic O2 gas. In plants, about ten percent of that oxygen is used by mitochondria in the leaf to support oxidative phosphorylation. The remainder escapes to the atmosphere where it is used by aerobic organisms to support respiration.

As electrons move through the proteins that reside between PSII and PSI, they take part in exergonic redox transfers. The free energy associated with the exergonic redox reaction is coupled to the endergonic transport of protons from the stromal side of the membrane to the thylakoid lumen. Those hydrogen ions, plus the ones produced by splitting water, accumulate in the thylakoid lumen and create a proton motive force that will be used to drive the synthesis of ATP in a later step. Since the electrons on PSI now have a greater reduction potential than when they started their trek (it is important to note that unexcited PSI has a greater redox potential than NADP+/NADPH), they must be re-energized in PSI before getting deposited onto NADP+. Therefore, to complete this process, another photon must be absorbed by the PSI antenna. That energy is transferred to the PSI reaction center (called P700). P700 is oxidized and sends an electron through several intermediate redox steps to NADP+ to form NADPH. Thus, PSII captures the energy in light and couples its transfer via redox reactions to the creation of a proton gradient. As already noted, the exergonic and controlled relaxation of this gradient can be coupled to the synthesis of ATP. PSI captures energy in light and couples that, through a series of redox reactions, to reduce NADP+ into NADPH. The two photosystems work in concert, in part, to guarantee that the production of NADPH will be in the right proportion to the production of ATP. Other mechanisms exist to fine tune that ratio to exactly match the chloroplast’s constantly changing energy needs. Figure 8. A diagram depicting the flow of electrons and the redox potentials of their carriers in oxygenic photosynthetic systems expressing both photosystem I and photosystem II.
Attribution: Marc T. Facciotti (own work)