Most people are familiar with carbohydrates, especially when it comes to what we eat. Carbohydrates are an essential part of our diet; grains, fruits, and vegetables are all natural sources. More generally, carbohydrates are one of the four classes of macromolecules that compose all cells. While we may be most familiar with the role carbohydrates play in nutrition, they also have a variety of other essential functions in humans, animals, plants, and bacteria. In this section, we will discuss and review basic concepts of carbohydrate structure and nomenclature, as well as a variety of functions they play in cells. Galactose (part of lactose, or milk sugar) and glucose (found in sucrose, glucose disaccharride) are other common monosaccharides. The chemical formula for glucose and galactose is C6H12O6; both are hexoses, but the arrangements of the hydrogens and hydroxyl groups are different at position C4. Because of this small difference, they differ structurally and chemically (and are known as chemical isomers) because of the different arrangement of functional groups around the asymmetric carbon; both of these monosaccharides have more than one asymmetric carbon (compare the structures in the figure below).

A second comparison can be made when looking at glucose, galactose, and fructose (the second carbohydrate that with glucose makes up the disaccharide sucrose, and is a common sugar found in fruit, hence the name). All three are hexoses; however, there is a major structural difference between glucose and galactose versus fructose: the carbon that contains the carbonyl (C=O). In glucose and galactose, it is on the C1 carbon, forming an aldehyde group; in fructose, it is on the C2 carbon, forming a ketone group. The former are called aldoses based on the aldehyde group that is formed; the latter are designated as ketoses based on the ketone group. Again, this difference gives fructose different chemical and structural properties from those of the aldoses, glucose, and galactose, although fructose, glucose, and galactose all have the same chemical composition: C6H12O6. Linear versus ring form of the carbohydrates

Monosaccharides can exist as a linear chain or as ring-shaped molecules; in aqueous solutions, they are usually found in ring forms (Figure 3). Glucose in a ring form can have two different arrangements of the hydroxyl group (OH) around the anomeric carbon (C1 that becomes asymmetric in the process of ring formation). If the hydroxyl group is below C1 in the sugar, it is said to be in the alpha (α) position, and if it is above the plane, it is said to be in the beta (β) position. Figure 3. Five and six carbon monosaccharides exist in equilibrium between linear and ring forms. When the ring forms, the side chain it closes on is locked into an α or β position. Fructose and ribose also form rings, although they form five-membered rings as opposed to the six-membered ring of glucose. 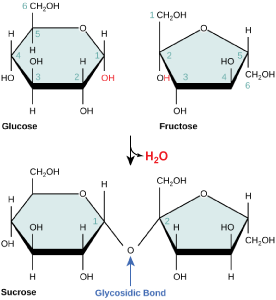 We have just discussed the various types and structures of carbohydrates found in biology. The next thing to address is how these compounds interact with other compounds. The answer to that is that it depends on the final structure of the carbohydrate. Because carbohydrates have many hydroxyl groups associated with the molecule, they are therefore excellent H-bond donors and acceptors . Monosaccharides can quickly and easily form H-bonds with water and are readily soluble. All of those H-bonds also make them quite "sticky." This also true for many disaccharides and many short-chain polymers. Longer polymers may not be so readily soluble.

A long chain of monosaccharides linked by glycosidic bonds is known as a polysaccharide (poly- = “many”). The chain may be branched or unbranched, and it may contain different types of monosaccharides. The molecular weight may be 100,000 daltons or more, depending on the number of monomers joined. Starch, glycogen, cellulose, and chitin are primary examples of polysaccharides. Cellulose is not very soluble in water when it is in a crystalline state; this can be approximated by the stacked cellulose fiber depiction above. Can you suggest a reason for why (based on the types of interactions) it might be so insoluble?