A functional group is a specific group of atoms within a molecule responsible for a characteristic of that molecule. Many biologically active molecules contain one or more functional groups. In BIS2A, we will review the major functional groups found in biological molecules. These include: hydroxyl, methyl, carbonyl, carboxyl, amino, thiol, and phosphate (see Figure 1).

A functional group may take part in a variety of chemical reactions. We depict some important functional groups commonly found in biological molecules above: hydroxyl, methyl, carbonyl, carboxyl, amino, thiol, and phosphate. These groups play an important role in the formation of molecules like DNA, proteins, carbohydrates, and lipids. Functional groups can sometimes have polar or nonpolar properties depending on their atomic composition and organization. The term polar describes something that has a property that is not symmetric about it — it can have different poles (more or less of something at different places). With bonds and molecules, the property we care about is usually the distribution of electrons and therefore the electric charge between the atoms. In a nonpolar bond or molecule, electrons and charge will be relatively evenly distributed. In a polar bond or molecule, electrons will concentrate in some areas than others. An example of a nonpolar group is the methane molecule (see discussion in Bond Types Chapter for more detail). Among the polar functional groups is the carboxyl group found in amino acids, some amino acid side chains, and the fatty acids that form triglycerides and phospholipids.

The methyl group is the only nonpolar functional group in our class list above. The methyl group comprises a carbon atom bound to three hydrogen atoms. In this class, we will treat these C-H bonds as effectively nonpolar covalent bonds (more on this in the Bond Types chapter). This means that methyl groups cannot form hydrogen bonds and will not interact with polar compounds such as water. 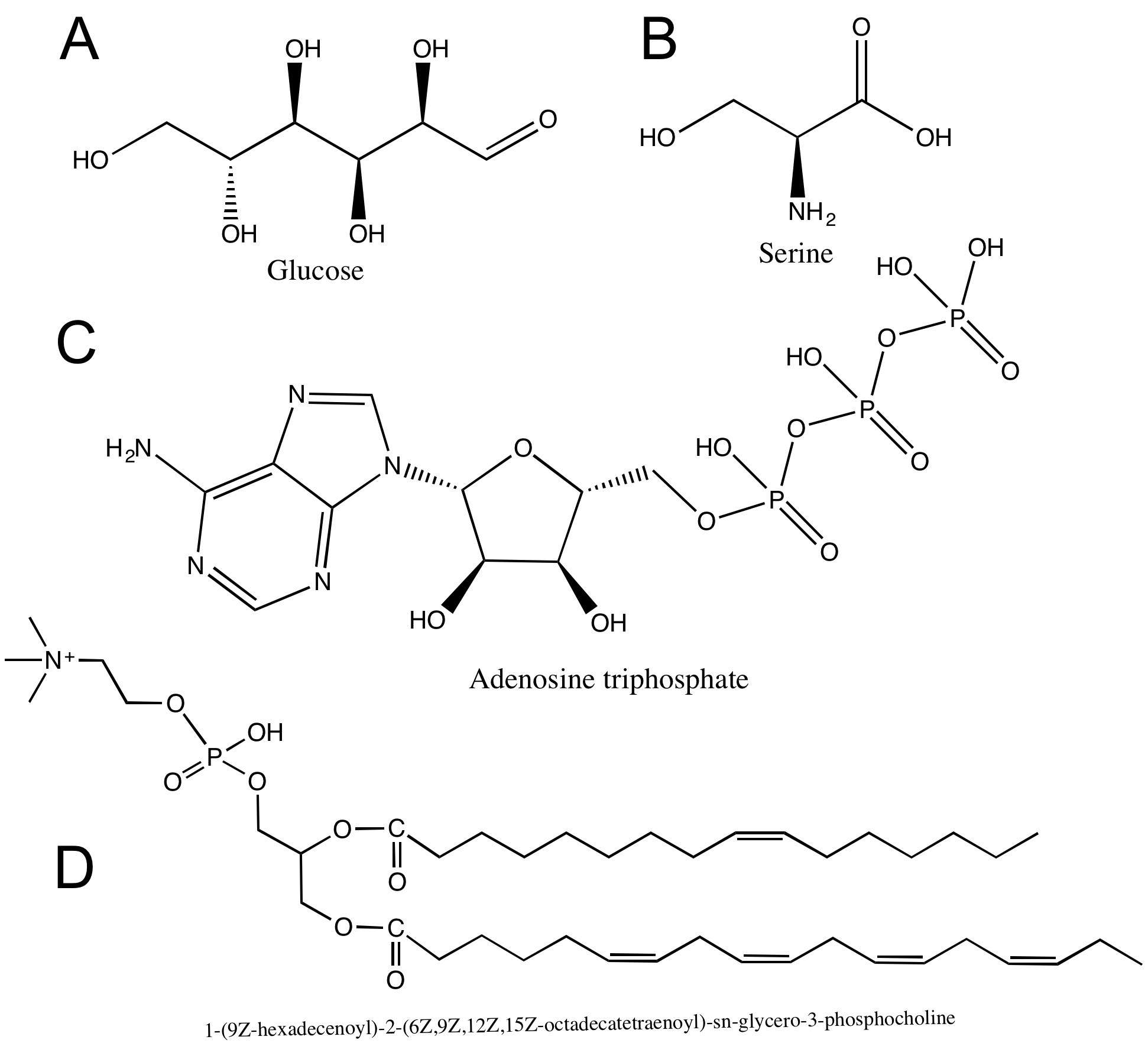 Amino groups can also act as bases, which means that the nitrogen atom can bond to a fourth hydrogen atom, as shown in Figure 6. Once this occurs, the nitrogen atom gains a positive charge and can now take part in ionic bonds.

You may also find it useful to get used to thinking about these molecules in three dimensions. The interactive figures below (try spinning the molecules) depict the two molecules above, deoxyadenosine monophosphate and phosphoserine as three-dimensional models. Getting used to three-dimensional representations of biomolecules and interacting with these models can help you form more detailed mental models of what biomolecules look like and how they might interact in "real life".

Water is a unique substance whose special properties are intimately tied to the processes of life. Life originally evolved in a watery environment, and most of an organism’s cellular chemistry and metabolism occur inside the water-solvated contents of the cell. Water solvates or "wets" the cell and the molecules in it, plays a key role as a reactant or product in an innumerable number of biochemical reactions, and mediates the interactions between molecules in and out of the cell. Many of water’s important properties derive from the molecule's polar nature, which derives from the asymmetric arrangement of its polar covalent bonds between hydrogen and oxygen.

In BIS2A, the ubiquitous role of water in nearly all biological processes is easy to overlook by getting caught up in the details of specific processes, proteins, the roles of nucleic acids, and in your excitement for molecular machines (it'll happen). It turns out, however, that water plays key roles in all of those processes and we will need to stay continuously aware of the role that water is playing if we are to develop a more functional understanding. Be on the lookout and also pay attention when your instructor points this out.

In a liquid state, individual water molecules interact with one another through a network of dynamic hydrogen bonds that are being constantly forming and breaking. Water also interacts with other molecules that have charged functional groups and/or functional groups with hydrogen bond donors or acceptors. A substance with sufficient polar or charged character may dissolve or be highly miscible in water and is referred to as being hydrophilic (hydro- = “water”; -philic = “loving”). Molecules with more nonpolar characters such as oils and fats do not interact well with water and separate from it rather than dissolve in it. We call these nonpolar compounds hydrophobic (hydro- = “water”; -phobic = “fearing”). We will consider some of the energetic components of these types of reactions in other another chapter. Since water is a polar molecule with slightly positive and slightly negative charges, ions and polar molecules can readily dissolve in it. Therefore, we refer to water as a solvent of other polar molecules and ionic compounds. Charges (or partial charges) associated with these molecules (the solutes) will interact electrostatically with water’s partial charges.  Polar bonds with the potential to donate or accept hydrogen bonds will form hydrogen bonds with water. Water molecules that interact directly with individual solute molecules will have their motions slightly constrained as will other nearby molecules. We refer to the layer or partially constrained waters surrounding a solute particle as a hydration layer, hydration shell or sphere of hydration.

When ionic salts are added to water, the individual ions interact with the polar regions of the water molecules, and the ionic bonds are likely disrupted in the process called dissociation. Dissociation occurs when atoms or groups of atoms break off from molecules and form ions. Consider table salt (NaCl, or sodium chloride). A dry block of NaCl is held together by ionic bonds and is difficult to dissociate. When NaCl crystals are added to water, however, the molecules of NaCl dissociate into Na+ and Cl– ions, and spheres of hydration form around the ions. The positively charged sodium ion is surrounded by the partially negative charge of the water molecule’s oxygen. The negatively charged chloride ion is surrounded by the partially positive charge of the hydrogen on the water molecule. One may imagine a model in which the ionic bonds in the crystal are "traded" for many smaller scale ionic bonds with the polar groups on water molecules.