Errors occurring during DNA replication are not the only way by which mutations can arise in DNA. Mutations, variations in the nucleotide sequence of a genome, can also occur because of physical damage to DNA. Such mutations may be of two types: induced or spontaneous. Induced mutations are those that result from an exposure to chemicals, UV rays, x-rays, or some other environmental agent. Spontaneous mutations occur with no exposure to any environmental agent; they result from spontaneous biochemical reactions taking place within the cell.

Mutations may have a wide range of effects.  silent mutations. Point mutations are those mutations that affect a single base pair. The most common nucleotide mutations are substitutions, . These can be of two types, either transitions or transversions. Transition substitution refers to a purine or pyrimidine being replaced by a base of the same kind; for example, . Transversion substitution refers to a purine being replaced by a pyrimidine, or vice versa; for example, cytosine, a pyrimidine, by adenine, a purine. Mutations can also the addition of a nucleotide, known as an insertion, or the removal of a base, also known as deletion. Sometimes a piece of DNA from one chromosome may get translocated to another chromosome or to another region of the same chromosome; as translocation.

As we will visit later, when a mutation occurs in a protein coding region, it may have several effects. Transition or transversion mutants may lead to no change in the protein sequence (known as silent mutations), change the amino acid sequence (known as missense mutations), or create a stop codon (known as a nonsense mutation). Insertions and deletions in protein coding sequences lead to frameshift mutations. Missense mutations that lead to conservative changes results in the substitution of similar but not identical amino acids. For example, the acidic amino acid glutamate being substituted for the acidic amino acid aspartate would conservative. We do not expect these types of missense mutations to be as severe as a non-conservative amino acid change; such as a glutamate substituted for a valine. Drawing from our understanding of functional group chemistry, we can correctly infer that this substitution may lead to severe functional consequences, depending upon location of the mutation.

Note that the preceding paragraph had a lot of potentially new vocabulary - it would be a good idea to learn these terms. Figure 1. Mutations can lead to changes in the protein sequence encoded by the DNA.

Mutations: Some nomenclature and considerations

Etymologically, the term mutation means a change or alteration. In genetics, a mutation is a change in the genetic material - DNA sequence - of an organism. By extension, a mutant is the organism in which a mutation has occurred. But what is the change compared to? The answer to this question is that it depends. We can make the comparison with the direct progenitor (cell or organism) or patterns seen in a population of the organism in question. It mostly depends on the specific context of the discussion. Since genetic studies often look at a population (or key subpopulations) of individuals, we begin by describing the term "wild-type".

What do we mean by "wild type"? Since the definition can depend on context, this concept is not entirely straightforward. Here are a few examples of definitions you may run into:

on the "norm" for a set of characteristics a specific trait compared to the overall population. In the "Pre-DNA sequencing Age" based on common phenotypes (what they looked like, where they lived, how they behaved, etc.). A "norm" for the species in question. For example, Crows display a common set of characteristics, they are large, black birds that live in specific regions, eat certain types of food and behave in a certain characteristic way. If we see one, we know a crow based on these characteristics. If we saw one with a white head, we would think either it is a different bird (not a crow) or a mutant, a crow that has some alteration from the norm or wild type.

In this class we take what is common about those varying definitions and adopt the idea that "wild type" is a reference standard against which we can compare members of a population.

If you were assigning wild type traits to describe a dog, what would they be? What is the difference between a mutant trait and variation of a trait in a population of dogs? Is there a wild type for a dog that we could use as a standard? How would we think about this concept dogs? 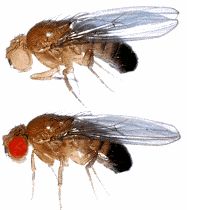 Mutations are changes from the "wild type", reference or parental sequence for an organism. While the term "mutation" has colloquially negative connotations, we remember that change is neither inherently "bad". Mutations (changes in sequences) should not primarily of as "bad" or "good", but as changes and a source of genetic and phenotypic diversity on which evolution by natural selection can occur. Natural selection ultimately determines the long-term of mutations. If the mutation confers a selective advantage to the organism, the mutation will and may eventually become very common in the population. Conversely, if the mutation is deleterious, natural selection will ensure that from the population. If the mutation is neutral, that is it neither provides a selective advantage or disadvantage, then it may persist in the population. Different a gene, including those associated with "wild type" and respective mutants, in a population alleles.

For an individual, the consequence of mutations may mean little or it may mean life or death. Some deleterious mutations are null or knock-out which result in a loss of function of the gene product. These mutations can arise by a deletion of the entire gene, a portion of the gene, or by a point mutation in a critical region of the gene that renders the gene product non-functional. These types of mutations are also referred to as loss-of-function mutations. Alternatively, mutations may lead to a modification of an existing function (i.e. the mutation may change the catalytic efficiency of an enzyme, a change in substrate specificity, or a change in structure). In rare cases a mutation may create a new or enhanced function for a gene product; to as a gain-of-function mutation. , mutations may occur in non-coding regions of DNA. These mutations can have a variety of outcomes including altered regulation of gene expression, changes in replication rates or structural properties of DNA and other non-protein associated factors.

Mutations can affect either somatic cells or germ cells. Sometimes mutations occur in DNA repair genes, in effect compromising the cell's ability to fix other mutations that may arise. If, of mutations in DNA repair genes, many mutations accumulate in a somatic cell, they may lead to problems such as the uncontrolled cell division observed in cancer. Cancers, including forms of pancreatic cancer, colon cancer, and colorectal cancer have with mutations like these in DNA repair genes. If a mutation in DNA repair occurs in germ cells (sex cells), the mutation will on to the next generation, as diseases like hemophilia and xeroderma pigmentosa. the case of xeroderma individuals with compromised DNA repair processes become very sensitive to UV radiation. In severe cases these individuals may get severe sun burns with just minutes of exposure to the sun. Nearly half of all children with this condition develop their first skin cancers by age 10.

Consequences of errors in replication, transcription and translation

Cells have evolved a variety of ways to make sure DNA errors are both detected and corrected, proof reading by the various DNA-dependent DNA polymerases, to more complex repair systems. Why did so many mechanisms evolve to repair errors in DNA? proof-reading mechanisms did NOT evolve for errors in transcription or translation. Why might this be? What would be the consequences of an error in transcription? Would such an error effect the offspring? Would it be lethal to the cell? What about translation? Ask the same questions about the process of translation. What would happen if into the growing polypeptide during the translation of a protein? Contrast this with DNA replication.

Mutations as instruments of change

Mutations are how populations can adapt to changing environmental pressures

Mutations in the genome of every organism, and this creates genetic diversity and a plethora of different alleles per gene per organism in every population on the planet. If mutations did not occur, and chromosomes and transmitted with 100% fidelity, how would cells and organisms adapt? Whether evolution keeps mutations in a population depends on whether the mutation provides selective advantage, poses some selective cost or at the very least, not harmful. that appear neutral may persist in the population for many generations and only be meaningful when a population with a new environmental challenge. apparently previously neutral mutations may provide a selective advantage.

The bacterium E. coli is sensitive to an antibiotic called streptomycin, which inhibits protein synthesis by binding to the ribosome. such that streptomycin no longer binds to the ribosome and inhibits protein synthesis. Wild type and L12 mutants grow equally and the mutation appears to be neutral in the . In the cells die and L12 mutants survive. This example shows how genetic diversity is important for the population to survive. If mutations did not randomly occur, when the population by an environmental event, such as the exposure to streptomycin, the entire population would die. For most populations this becomes a numbers game. If the mutation rate is 10-6 then a population of 107 cells would have 10 mutants; a population of 108 would have 100 mutants, etc. Lactate Dehydrogenase (LDH), the enzyme that catalyzes the reduction of pyruvate into lactic acid in fermentation, while virtually every organism has this activity, the corresponding enzyme and therefore gene differs immensely between humans and bacteria. they perform the same basic function but have a variety of differences, from substrate binding affinities and reaction rates to optimal salt and pH requirements. Each of these attributes have for each specific organism through multiple rounds of mutation and selection.

We can use comparative DNA sequence analysis to generate hypotheses about the evolutionary relationships between three or more organisms. One way to accomplish this is to compare the DNA or protein sequences of proteins found in each of the organisms we wish to compare. Let us, for example, imagine that we were to compare the sequences of lactate dehydrogenase (LDH) from three different organisms. The schematic below depicts the primary structures of LDH proteins from Organisms A, B, and C. The letters in the center of the proteins' line diagram represent amino acids at a unique position and the proposed differences in each sequences (Attribution: . Facciotti [original work]). Question: Is Organism C more closely related to Organism A or B? The simplest explanation is that Organism A is the earliest form, a mutation occurred giving rise to Organism B. Over time a second mutation arose in the B lineage to give rise to the enzyme found in Organism C. This is the simplest explanation, however we cannot rule out other possibilities. Can you think of other ways the different the LDH enzyme arose these three organisms?

As we have seen in the "Mutations and Mutants" module, changing even one nucleotide can have major effects on the translated product. Read more about an undergraduate's work on point mutations and GMOs here.

that results from exposure to chemicals or environmental agents

variation in the nucleotide sequence of a genome

type of repair mechanism in which after replication

type of DNA repair mechanism in which the wrong base, along with a few nucleotides upstream or downstream,

that affects a single base