In this class, most of the oxidation/reduction reactions that we discuss occur in metabolic pathways (connected sets of metabolic reactions) where compounds consumed by the cell down into smaller parts and then reassembled into larger macromolecules.

Transferring electrons between two compounds results in one of these compounds loosing an electron and one compound gaining an electron. For example, look at the figure below. If we use the energy story rubric to look at the overall reaction, we can compare the before and after characteristics of the reactants and products. What happens to the matter (stuff) before and after the reaction? Compound as neutral and becomes positively charged. Compound B starts as neutral and becomes negatively charged. Because electrons , we can follow the movement of electrons from compound A to B by looking at the change in charge. an electron (becoming positively charged), and we say that A has become oxidized. with the loss of s). B gains the electron (becoming negatively charged), and we say that B has become reduced. with the gain of electrons. We also know, since something happened that energy must have and/or reorganized in this process and we'll consider this shortly. 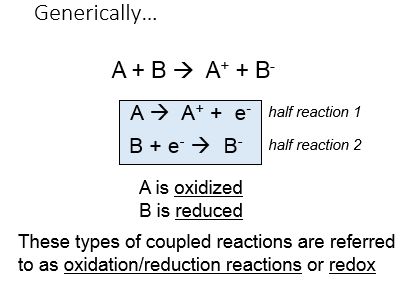 By convention we analyze and describe red/ox reactions with respect to reduction potentials, a term that quantitatively describes the “ability” of a compound to gain electrons. This value of the reduction potential is determined experimentally but for the purpose of this course we assume that the reader will accept that the reported values are reasonably correct. We can anthropomorphize the reduction potential by saying that it is related to the strength with which a compound can “attract” or “pull” or “capture” electrons. Not surprisingly this is is related to but not identical to electronegativity.

Different compounds, based on their structure and atomic composition have intrinsic and distinct attractions for electrons. This quality is termed reduction potential or E0’and is a relative quantity (relative to some “standard” reaction). If a test compound has a stronger "attraction" to electrons than the standard (if the two competed, the test compound would "take" electrons from the standard compound), we say that the test compound has a positive reduction potential whose magnitude is proportional to how much more it "wants" electrons than the standard compound. The relative strength of the compound compared to the standard is measured and reported in units of Volts (V)(sometimes written as electron volts or eV) or milliVolts (mV). The reference compound in most red/ox towers is H2.

All kinds of compounds can take part in red/ox reactions. Scientists have developed a graphical tool to tabulate red/ox half reactions based on their E0' values and to help us predict the direction of electron flow between potential electron donors and acceptors. Whether a particular compound can act as an electron donor (reductant) or electron acceptor (oxidant) depends critically on what other compound it is interacting with. The electron tower usually ranks a variety of common compounds (their half reactions) from most negative E0', compounds that readily get rid of electrons, to the most positive E0', compounds most likely to accept electrons. In addition, each half reaction is written by convention with the oxidized form on the left/followed by the reduced form on the right of the slash.
For example, we write the half reaction for the reduction of NAD+ to NADH:
NAD+/NADH. The tower below also lists the number of electrons that are transferred in each reaction. For example, the reduction of NAD+ to NADH involves two electrons, written in the table as 2e-.

A biochemical electron tower is shown below.