Secondary Structure of a Polypeptide Chain

Shows grouping of φψ combinations and relates them to structures in real proteins. Repetitive structures (α-helices, β-sheets) are common An alpha-helix is a right-handed coil of amino-acid residues on a polypeptide chain, typically ranging between 4 and 40 residues. This coil is held together by hydrogen bonds between the oxygen of C=O on top coil and the hydrogen of N-H on the bottom coil. Such a hydrogen bond is formed exactly every 4 amino acid residues, and every complete turn of the helix is only 3.6 amino acid residues. This regular pattern gives the alpha-helix very definite features with regards to the thickness of the coil and the length of each complete turn along the helix axis.

The structural integrity of an alpha-helix is in part dependent on correct steric configuration. Amino acids whose R-groups are too large (tryptophan, tyrosine) or too small (glycine) destabilize alpha-helices. Proline also destabilizes alpha-helices because of its irregular geometry; its R-group bonds back to the nitrogen of the amide group, which causes steric hindrance. In addition, the lack of a hydrogen on Proline's nitrogen prevents it from participating in hydrogen bonding.

Another factor affecting alpha-helix stability is the total dipole moment of the entire helix due to individual dipoles of the C=O groups involved in hydrogen bonding. Stable alpha-helices typically end with a charged amino acid to neutralize the dipole moment. 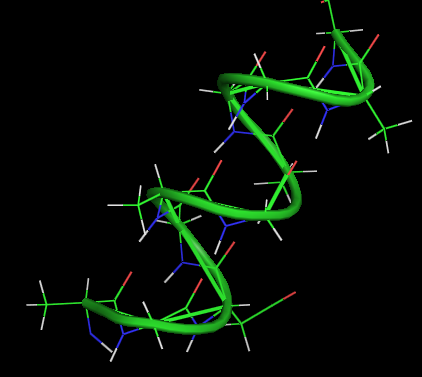 α-helices have a dipole moment; some side chains are preferred

This structure occurs when two (or more, e.g. psi-loop) segments of a polypeptide chain overlap one another and form a row of hydrogen bonds with each other. This can happen in a parallel arrangement: Or in anti-parallel arrangement: 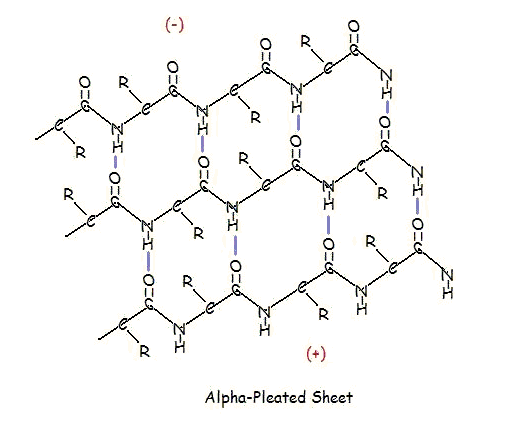 The folding of a protein reduces the free energy (ΔG) of the system.

The folding of a protein involves both protein and solvent.

ΔG = GF- GU
= ΔH - TΔS
=
+ ΔH(protein)
+ ΔH(solvent)
-- TΔS(protein)
-- TΔS(solvent)
ΔG for folding
is small (-20 to -60 kJ/mol) and primarily from hydrophobic interactions
Why so low?
Changes in shape are an important part of protein function and control.For example: a change in shape allows DNA methyltransferase to choose hemi-methylated me CG/GC for bimethylation to me CG/Gme C