Although they are both eukaryotic cells, there are unique structural differences between animal and plant cells.

Each eukaryotic cell has a plasma membrane, cytoplasm, a nucleus, ribosomes, mitochondria, peroxisomes, and in some, vacuoles; however, there are some striking differences between animal and plant cells. While both animal and plant cells have microtubule organizing centers (MTOCs), animal cells also have centrioles associated with the MTOC: a complex called the centrosome. Animal cells each have a centrosome and lysosomes, whereas plant cells do not. Plant cells have a cell wall, chloroplasts and other specialized plastids, and a large central vacuole, whereas animal cells do not.

The centrosome is a microtubule-organizing center found near the nuclei of animal cells. It contains a pair of centrioles, two structures that lie perpendicular to each other. Each centriole is a cylinder of nine triplets of microtubules. The centrosome (the organelle where all microtubules originate) replicates itself before a cell divides, and the centrioles appear to have some role in pulling the duplicated chromosomes to opposite ends of the dividing cell. However, the exact function of the centrioles in cell division isn’t clear, because cells that have had the centrosome removed can still divide; and plant cells, which lack centrosomes, are capable of cell division. 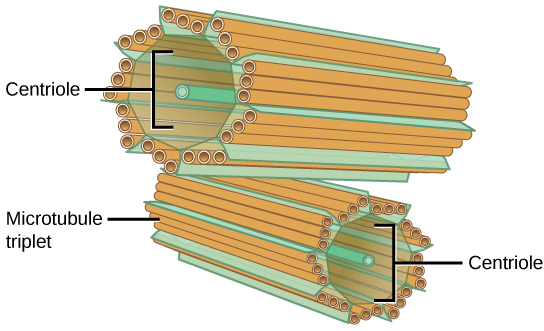 The Centrosome Structure: The centrosome consists of two centrioles that lie at right angles to each other. Each centriole is a cylinder made up of nine triplets of microtubules. Nontubulin proteins (indicated by the green lines) hold the microtubule triplets together.

Animal cells have another set of organelles not found in plant cells: lysosomes. The lysosomes are the cell’s “garbage disposal.” In plant cells, the digestive processes take place in vacuoles. Enzymes within the lysosomes aid the breakdown of proteins, polysaccharides, lipids, nucleic acids, and even worn-out organelles. These enzymes are active at a much lower pH than that of the cytoplasm. Therefore, the pH within lysosomes is more acidic than the pH of the cytoplasm. Many reactions that take place in the cytoplasm could not occur at a low pH, so the advantage of compartmentalizing the eukaryotic cell into organelles is apparent.

The cell wall is a rigid covering that protects the cell, provides structural support, and gives shape to the cell. Fungal and protistan cells also have cell walls. While the chief component of prokaryotic cell walls is peptidoglycan, the major organic molecule in the plant cell wall is cellulose, a polysaccharide comprised of glucose units. When you bite into a raw vegetable, like celery, it crunches. That’s because you are tearing the rigid cell walls of the celery cells with your teeth.

Like mitochondria, chloroplasts have their own DNA and ribosomes, but chloroplasts have an entirely different function. Chloroplasts are plant cell organelles that carry out photosynthesis. Photosynthesis is the series of reactions that use carbon dioxide, water, and light energy to make glucose and oxygen. This is a major difference between plants and animals; plants (autotrophs) are able to make their own food, like sugars, while animals (heterotrophs) must ingest their food.