1) Whose proposal of the endosymbiotic theory of mitochondrial and chloroplast origin was ultimately accepted by the greater scientific community?

2) Which of the following organelles is not part of the endomembrane system?

3) Which type of cytoskeletal fiber is important in the formation of the nuclear lamina?

4) Sugar groups may be added to proteins in which of the following?

5) Which of the following structures of a eukaryotic cell is not likely derived from endosymbiotic bacterium?

6) Which type of nutrient uptake involves the engulfment of small dissolved molecules into vesicles?

7) Which of the following is not composed of microtubules?

8) Which genus includes the causative agent for malaria?

9) Which protist is a concern because of its ability to contaminate water supplies and cause diarrheal illness?

10) A fluke is classified within which of the following?

11) A nonsegmented worm is found during a routine colonoscopy of an individual who reported having abdominal cramps, nausea, and vomiting. This worm is likely which of the following?

12) A segmented worm has male and female reproductive organs in each segment. Some use hooks to attach to the intestinal wall. Which type of worm is this?

13) Mushrooms are a type of which of the following?

14) Which of the following is the most common cause of human yeast infections?

15) Which of the following is an ascomycete fungus associated with bat droppings that can cause a respiratory infection if inhaled?

16) Which polysaccharide found in red algal cell walls is a useful solidifying agent?

17) Which is the term for the hard outer covering of some dinoflagellates?

18) Which protists are associated with red tides?

19) You encounter a lichen with leafy structures. Which term describes this lichen?

20) Which of the following is the term for the outer layer of a lichen?

21) The fungus in a lichen is which of the following?

27) A species of worm in which there are distinct male and female individuals is described as _________.

30) Some fungi have proven medically useful because they can be used to produce _________.

31) Structures in chloroplasts used to synthesize and store starch are called ________.

33) What evidence exists that supports the endosymbiotic theory?

34) What existing evidence supports the theory that mitochondria are of prokaryotic origin?

35) Why do eukaryotic cells require an endomembrane system?

38) Aside from a risk of birth defects, what other effect might a toxoplasmosis infection have?

40) What is the best defense against tapeworm infection?

41) Which genera of fungi are common dermatophytes (fungi that cause skin infections)?

42) What is a dikaryotic cell?

43) What is a distinctive feature of diatoms?

44) Why are algae not considered parasitic?

45) Which groups contain the multicellular algae?

46) Label the lettered parts of this eukaryotic cell. 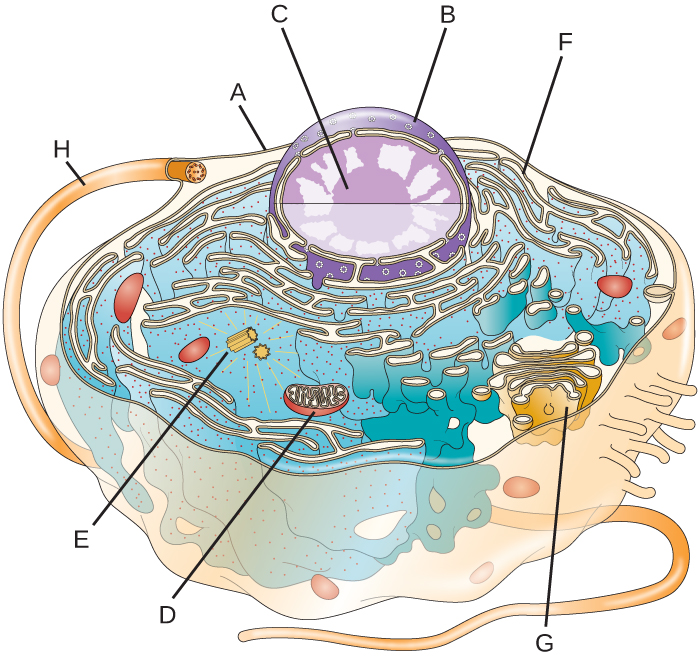 47) How are peroxisomes more like mitochondria than like the membrane-bound organelles of the endomembrane system? How do they differ from mitochondria?

48) Why must the functions of both lysosomes and peroxisomes be compartmentalized?

49) The protist shown has which of the following?

51) What characteristics might make you think a protist could be pathogenic? Are certain nutritional characteristics, methods of locomotion, or morphological differences likely to be associated with the ability to cause disease?

52) Given the life cycle of the Schistosoma parasite, suggest a method of prevention of the disease.

53) Which of the drawings shows septate hyphae?

54) Explain the benefit of research into the pathways involved in the synthesis of chitin in fungi.