Humans rely on technology to modify their environment and make it habitable. Other species cannot do this. Elimination of their habitat—whether it is a forest, coral reef, grassland, or flowing river—will kill the individuals in the species. Remove the entire habitat, and the species will become extinct, unless they are among the few species that do well in human-built environments. Habitat loss includes habitat destruction and habitat fragmentation.

Habitat destruction occurs when the physical environment required by a species is altered so that the species can no longer live there. Human destruction of habitats accelerated in the latter half of the twentieth century. Land conversion for agriculture has been the main driver of habitat loss since 1970. Figure 9.2.1a depicts commodities produced on previously forested land, with the greatest proportion from cattle and palm oil. Figure 9.2.1b illustrates the differences in land requirements for various crops.

Consider the exceptional biodiversity of Sumatra: it is home to one species of orangutan, a species of critically endangered elephant, and the Sumatran tiger, but half of Sumatra’s forest is now gone. The neighboring island of Borneo, home to the other species of orangutan, has lost a similar area of forest. Forest loss continues in protected areas of Borneo. The orangutan in Borneo is listed as endangered by the International Union for Conservation of Nature (IUCN), but it is simply the most visible of thousands of species that will not survive the disappearance of the forests of Borneo. The forests are removed for timber and to plant palm oil plantations (figure \(\PageIndex{a}\)). Palm oil is used in many products including food products, cosmetics, and biodiesel in Europe. According to Global Forest Watch, 9.7% of tree cover was lost globally from 2002 to 2019, and 9% of that occurred in Indonesia and Malaysia (where Sumatra and Borneo are located). Figure \(\PageIndex{b}\) shows the average annual change in forest area around the world from 1990 to 2015. 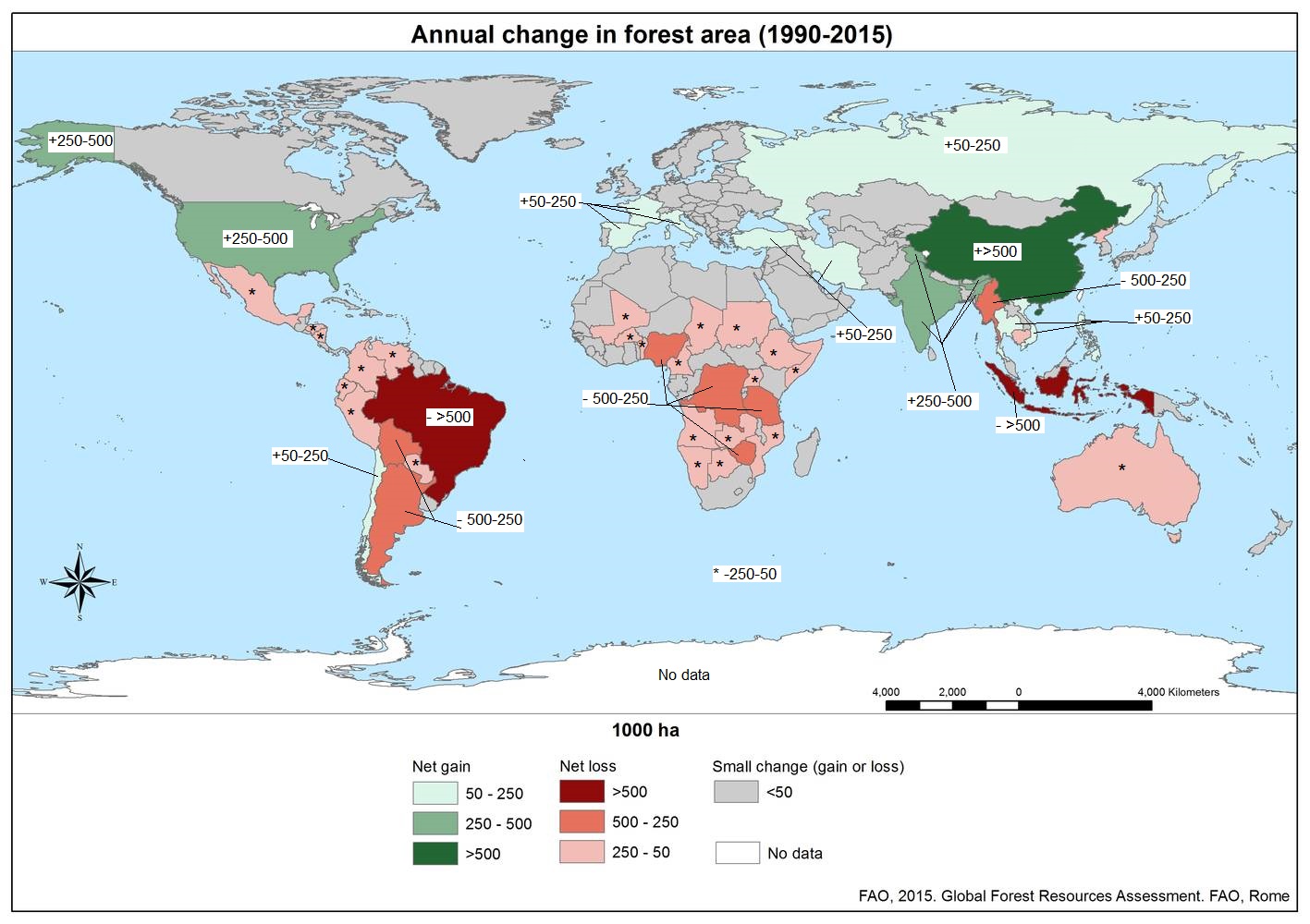 Most consumers do not imagine that the home improvement products they buy might be contributing to habitat loss and species extinctions. Yet the market for illegally harvested tropical timber is huge, and the wood products often find themselves in building supply stores in the United States. One estimate is that up to 10% of the imported timber in the United States, which is the world’s largest consumer of wood products, is illegally logged. A 2012 United Nations and Interpol report estimated that the illegal timber trade is worth $30-100 billion each year. Most of the illegal products are imported from countries that act as intermediaries and are not the originators of the wood.

How is it possible to determine if a wood product, such as flooring, was harvested sustainably or even legally? The Forest Stewardship Council (FSC) certifies sustainably harvested forest products (figure \(\PageIndex{c}\)). Looking for their certification on flooring and other hardwood products is one way to ensure that the wood has not been taken illegally from a tropical forest. There are certifications other than the FSC, but these are run by timber companies, thus creating a conflict of interest. Another approach is to buy domestic wood species. While it would be great if there was a list of legal versus illegal woods, it is not that simple. Logging and forest management laws vary from country to country; what is illegal in one country may be legal in another. Where and how a product is harvested and whether the forest from which it comes is being sustainably maintained all factor into whether a wood product will be certified by the FSC. It is always a good idea to ask questions about where a wood product came from and how the supplier knows that it was harvested legally. 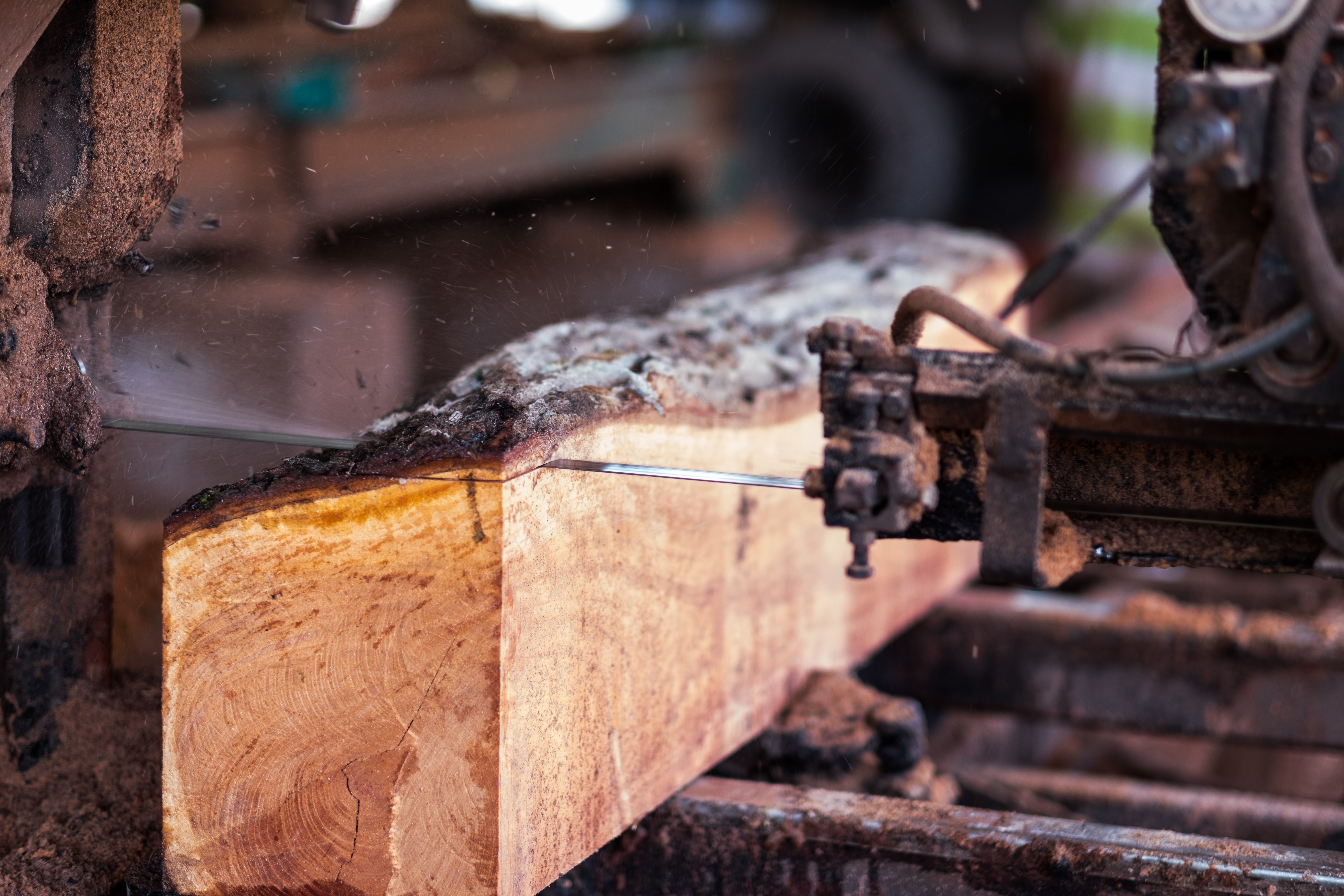 Figure \(\PageIndex{c}\): The sawmill in Uaxactun, Guatamala is Forest Stewardship Council (FSC) certified and provides good income from a sustainable resource for not only the saw operators but also many others who help keep the operation running. Image by Jason Houston for USAID (public domain).

Habitat Destruction of Rivers and Streams

Habitat destruction can affect ecosystems other than forests. Rivers and streams are important ecosystems and are frequently the target of habitat modification. Damming of rivers affects flow and access to habitat. Altering a flow regime can reduce or eliminate populations that are adapted to seasonal changes in flow. For example, an estimated 91% of riverways in the United States have been modified with damming or stream bank modification. Many fish species in the United States, especially rare species or species with restricted distributions, have seen declines caused by river damming and habitat loss. Research has confirmed that species of amphibians that must carry out parts of their life cycles in both aquatic and terrestrial habitats are at greater risk of population declines and extinction because of the increased likelihood that one of their habitats or access between them will be lost. This is of particular concern because amphibians have been declining in numbers and going extinct more rapidly than many other groups for a variety of possible reasons.

Habitat fragmentation occurs when the living space of a species is divided into discontinuous patches. For example, a mountain highway could divide a forest habitat into separate patches. This is especially problematic for consumers at the top of the food chain, which require large ranges to find adequate prey. Additionally, habitat fragmentation separates individuals from potential mates. Wildlife corridors mitigate the damage of habitat fragmentation by connecting patches with suitable habitat. For example, the bridge over a highway could allow animals to move between habitat patches (figure \(\PageIndex{d}\)). Riparian areas, areas of land adjacent to bodies of water, such as streams, can serve as natural wildlife corridors when left intact. 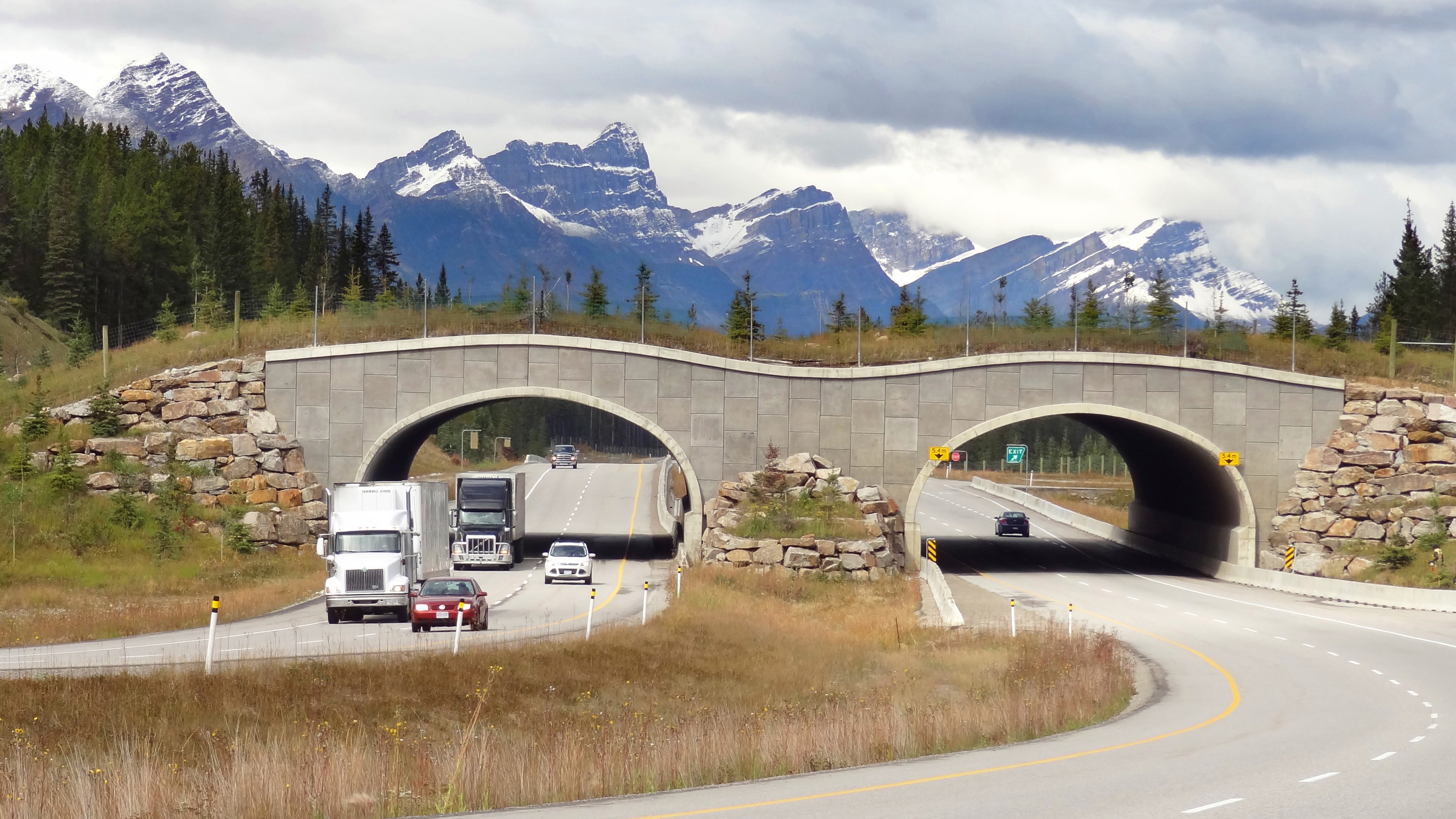 Figure \(\PageIndex{d}\): This overpass on the Trans-Canada Highway between Banff and Lake Louise, Alberta, serves as a wildlife corridor. Image by WikiPedant at Wikimedia Commons (CC-BY-SA).