This interesting image is a 19th-century representation of Earth that is based on an ancient Hindu myth. According to the myth, Earth rests on the backs of elephants, which in turn stand on the back of a giant turtle. Virtually all human cultures and religions have developed myths about Earth and its origins. For example, until fairly recently, many Westerners thought that Earth was created in a day and that this occurred just a few thousand years ago. However, a diversity of evidence has since convinced the scientific community that Earth actually formed by natural processes from stardust a mind-boggling 4.5 to 4.6 billion years ago. Evidence also suggests that life first appeared on Earth up to 4 billion years ago and has been evolving ever since.

Earth in a Day Figure \(\PageIndex{2}\): The geological clock: a projection of Earth's 4,5 Ga history on a clock ("Ma" = a million years (Megayear) ago; "Ga" = a billion years (Gigayear) ago). (WoudloperDerivative work: Hardwigg [Public domain]; via Wikimedia.org)

It can be difficult to wrap your mind around such vast amounts of time as the age of Earth and its early life forms. A useful way for envisioning the relative amounts of time that passed between Earth's origin and important events in biological evolution is to condense the total period of time to a 24-hour day, as shown in the figure below. On this scale, Earth would have formed at midnight, and the first life would have appeared at about 3:00 a.m. Humans would have appeared only during the last minute of the day. If we are such newcomers on planet Earth, how do we know about the vast period of time that went before us? How have we learned about the distant past?

Much of what we know about the history of life on Earth is based on the fossil record, so this is an extremely important tool in the study of evolution. The fossil record is the record of life that unfolded over four billion years on Earth as reconstructed from the discovery and analysis of fossils. Fossils are the preserved remains or traces of organisms that lived in the past. The soft parts of organisms almost always decompose quickly after death. On occasion, the hard parts — mainly bones, teeth, or shells — remain long enough to mineralize and form fossils. An example of a complete fossil skeleton is pictured below.

To be preserved as fossils, remains must be covered quickly by sediments or preserved in some other way. For example, they may be frozen in glaciers or trapped in tree resin or rock, like the frog shown below. Sometimes traces of organisms — such as footprints or burrows — are preserved. Fossilized dinosaur footprints are also shown below. The conditions required for fossils to form rarely occur. Therefore, the chance of any given organism being preserved as a fossil is extremely low. Figure \(\PageIndex{4}\): The photo on the left shows an ancient frog fossilized in rock. (Kevin Walsh from Oxford, England [CC BY 2.0 ]; via Wikimedia.org)

In order for fossils to “tell” us the story of life, their chronology must be established. This means that fossils must be dated. Only then can they help scientists reconstruct how life changed over time. Fossils can be dated in two different ways, called relative dating and absolute dating. 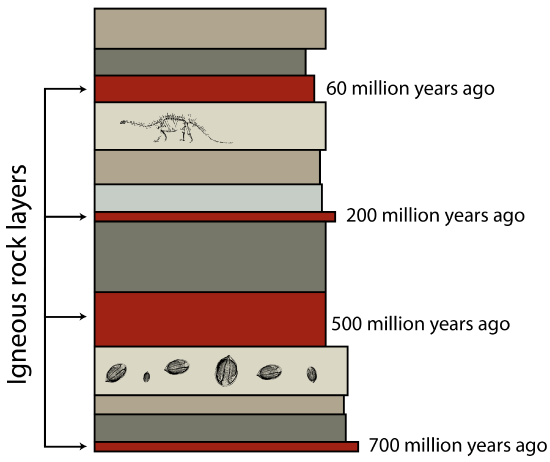 Figure \(\PageIndex{5}\): Relative Dating Using Rock Layers. Relative dating establishes which of two fossils is older than the other. It is based on the rock layers in which the fossils formed. (Jillcurie [CC BY-SA 3.0)]; via Wikimedia.org)

Molecular clocks are also valuable tools for studying evolution. A molecular clock uses DNA sequences (or the amino acid sequence of proteins that DNA encodes) to estimate how long it has been since related species diverged from a common ancestor. Molecular clocks are based on the assumption that mutations accumulate through time at a steady average rate for a given region of DNA. Species that have accumulated greater differences in their DNA sequences are assumed to have diverged from their common ancestor in the more distant past. Molecular clocks based on different regions of DNA may be used together for more accuracy. Look at the comparisons of DNA in the table below. Based on these data, which organism do you think shared the most recent common ancestor with humans?

Reality: Gaps in the fossil record, where transitional fossils between ancestral and descendant groups have not been found, are to be expected. The chances of organisms being fossilized is low. Some organisms do not preserve well, and conditions needed for fossilization are only rarely present. If evolution is occurring rapidly, the chances of transitional fossils forming is even lower. Even if fossils of transitional organisms do form, they must be discovered by researchers to be added to the fossil record. The vast majority of fossils have not been found. Researchers are studying the fossilization process to shed light on how much of the fossil record has not yet been discovered.

Fortunately, like fingerprints at a murder scene, the fossil record is just one type of evidence for evolution. In addition to fossils, molecular sequences and other types of evidence are all used together to reveal how life on Earth evolved.

What would it look like if we took Earth's 4.5 billion year history and stuffed it into a normal day's 24-hour time-frame? Check it out here:

Carbon dating allows us to estimate the ages of